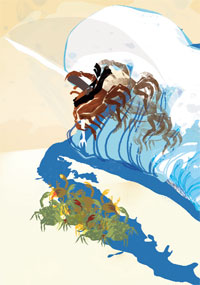 BE IT plant or animal, introduction of a foreign species to an environment has more often than not put the native ones at risk. At places, while competing for food and space, foreign species become so invasive that they push the region’s predominant organisms to extinction.

In case of animals, the usual way to oust the competing ones is by preying on them. But is this the only way to prevail in this competition? Scientists of University of South Carolina in the US observed another mechanism by which a species displaces the other: by controlling its reproduction capacity.

The scientists studied the interaction of two invasive species Asian shore crab (Hemigraspus sanguineus) and European green crab (Carcinus maenus). Both are foreign to North America and were likely introduced to the region via ballast water of ships.

The green crab had colonised the Atlantic coast for over a century before shore crabs were spotted in the region in 1989. But its population started declining since the arrival of shore crabs. For instance, in Long Island Sound, an estuary of the Atlantic Ocean located in southern US, shore crabs replaced green crabs within three years. 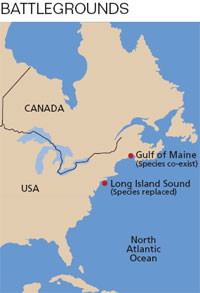 A study in 2002, published in Ecology, had shown that the shore crab eliminated the green crab from Long Island Sound by feeding on its larvae.

But this was not the case in the Gulf of Maine, towards north of Long Island Sound, where the two species have been coexisting for over 10 years. To ascertain the mechanism of replacement, scientists of the South Carolina university studied the interaction of the species in the Gulf of Maine.

They found that the diet of the green crab has changed from mussels to algae in areas where shore crab density is more than nine per square metre. This has reduced their reproduction capacity. The team analysed the diet of crabs by determining the amount of heavy nitrogen (N15) in their muscle tissue. Crabs that are mainly carnivorous have high levels of N15. Algae-rich diet affects the green crab’s hepatopancreas, a gland that functions both as liver and pancreas and provides energy.

A decrease in the number of offsprings coupled with predation on larvae could be the mechanism how shore crabs are nudging green crabs out, notes the study published in the September 30 issue of Journal of Experimental Marine Biology and Ecology.

Then why is the shore crab failing to oust the green crab in the Gulf of Maine? The team analysed the influence of the region’s ecology on the species.

The ocean current patterns in the Gulf of Maine, in the northern Atlantic coast, are different from that of Long Island Sound in the southern region, explains Blaine Griffen, first author of the study.

The current flows southwards in the northern Atlantic Ocean coast. Since green crabs are found much farther north, in Canada for example, than shore crabs, their larvae produced in these regions usually flow southwards and settle in the Gulf of Maine. This supply of larvae compensates for the loss accruing because of shore crabs. This means green crabs may never disappear entirely from northern regions, because every now and then, larvae will arrive and replenish the declining population, points out Griffen.

Moreover, unlike Long Island Sound, the northern Atlantic coast is lined with rocky cliffs, a habitat preferred by both the crabs. This reduces the intensity of interaction between the species for space, Griffen adds.

European green crab is an aggressive invader worldwide. North American Atlantic Coast is the first site where a species has been able to control it. So this could potentially help management decisions in other places where the green crab is a menace, says Griffen. “However, I do not endorse introducing shore crabs into areas invaded by green crabs to control them,” he clarifies.