A flavour of risk 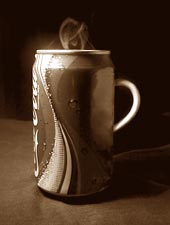 Worldwide, 68 per cent of boys and 62 per cent of girls aged 12 to 17 drink one or more soft drinks daily. Moreover, the percentage of adolescents drinking caffeinated soft drinks is more than double the percentage of those who consume non-caffeinated soft drinks. Caffeine is a drug used in soft drinks as a "flavouring agent". In the past, caffeine intake has been linked with a number of diseases, like recurrent headaches (see: Caffeinism).
The study's objective was to assess the association between consumption of caffeinated beverages and blood pressure in African American and white adolescents. The sample consisted of African American boys and girls, and White boys and girls, all aged 16. The participants were stratified into three caffeine-intake categories -- 0-50 mg/d, >50-100 mg/d and >100 mg/d.

The results were found to be quite disturbing (see table: Hard hitting). There was a clear link between caffeine intake and high blood pressure among African American participants. Such a correlation, however, could not be found among the White population, probably due to genetic factors.

According to the researchers, additional research should be conducted owing to rising rates of adolescent hypertension and soft drink consumption. Agrees Stephen R Daniels of the us-based Cincinnati Children's Hospital Medical Centre. "There is still a lot to learn about diet and blood pressure, especially in children and adolescents.... It appears that caffeine could be important, but we need to know more about what it does over a prolonged time period," he says.
The findings are particularly significant for developing countries like India, where there is negligible research on the health effects of caffeine intake through soft drinks. "One never comes across any such study from an Indian perspective. Since the consumption of soft drinks among Indian adolescents is on the rise, a number of studies should be conducted to ascertain the risk," says Vinita Jain, a consultant paediatrician with the New Delhi-based Aastha Medical Centre.

In India, the issue of caffeine intake from soft drinks was brought to the forefront in January 2004 by a comprehensive document, 'Report of joint committee on pesticide residues in and safety standards for soft drinks, fruit juice and other beverages', prepared by a joint parliamentary committee (jpc). The 15-member committee was set up in August 2003, after the New Delhi-based non-governmental organisation Centre for Science and Environment released its path breaking study on the presence of pesticide residues in soft drinks being sold in New Delhi.

In its report, jpc points out that the Prevention of Food Adulteration Act, 1954, prescribes a limit of 200 milligrammes per kilogramme (mg/kg) of caffeine in carbonated water (soft drinks). This is much higher than the limit specified by industrialised countries. For instance, the Netherlands, South Africa and Spain permit only 150 mg/kg of caffeine in brown coloured soft drinks (cola drinks). The best practice is followed in Australia, which allows a maximum level of 145 mg/kg in cola drinks. A higher content needs to be printed on the label along with a health warning.

Ironically, in India, no such regulations exist despite caffeine being added to all kinds of soft drinks. Cola companies claim that in India there is no demand for non-caffeinated drinks. As per jpc recommendations, it is "desirable that all brands should include caffeinated and non-caffeinated drinks.... The ministry (Union ministry of health and family welfare) may consider bringing down the present limit of 200 ppm (parts per million) in carbonated beverages...".

But the ministry is unlikely to follow the jpc recommendations. During the 37th meeting of the food additive sub-committee of Central Committee for Food Standards held on April 26, 2004, it contended that "since non-caffeinated drinks are available in markets, it is for the manufacturer to decide and inform whether they desire to market caffeinated and non-caffeinated drinks of the same brand". It also raised doubts over bringing down the levels of caffeine in soft drinks. Such contentions prove that India has a long way to go before government officials stop promoting industry at the cost of public health.