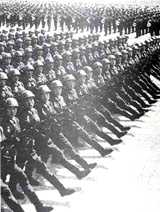 UNCLE Sam has done it once again. In mid-February, the Kim Il Sung regime in North Korea finally agreed to allow the International Atomic Energy Agency (IAEA) to inspect its seven declared nuclear sites. The decision came after 10 nerve-wracking days during which the two countries hurled verbal missiles at each other and the rest of the world waited with bated breath for the battle-cry.

The turnaround was sudden. Only a week earlier, the message from North Korea was loud and clear: there were absolutely "no immediate prospects" of allowing IAEA to conduct unconditional inspections of its nuclear sites. Yun Ho Jin, North Korea's envoy to IAEA, had left little room for doubt. "It is clear that the conflicting positions of the IAEA and Pyongyang cannot be merged at the moment," he declared. And, the official despatch from the Korean Central News Agency was positively explosive: "We shall not sit back and watch the manoeuvres of the United States to isolate and stifle us. If it takes a stance of pressure against us, we will consider it an act of war."


Significantly, Pyongyang had shown signs of loosening up in January. The North Koreans seemed ready to consider the options offered to them by the US. They would open up their declared nuclear facilities to unimpeded, regular IAEA inspection, provided the US accorded it diplomatic recognition, removed restrictions on trade and investments and helped in obtaining multilateral credits.

International diplomatic recognition is of vital importance to the North Korean leadership, which views it as a protective armour to ward off future salvos fired by the Pentagon. The normalisation of relations will put their minds at rest because it would signify US readiness to coexist.

The economic help offered -- $2 billion in credit over 10 years, to be doled out by the US, Japan, South Korea and multilateral agencies -- must have also been too tempting to resist. North Korea has not been able to overcome the crippling loss of subsidies that Russia and China provided during the Cold War. Foreign investments are needed desperately to repair its threadbare economy.

US analysts believe the talks collapsed partially responsible of a Senate resolution in the first week of February, advising Washington to prepare to return tactical nuclear weapons to South Korea if negotiations with the North were deadlocked.

However, what perhaps finally blew the fragile negotiations to bits was the hostile attitude of US defence chiefs. "North Korea will be the critical, major military threat for the next few years," commented James R Clapper, head of the Defense Intelligence Agency. They had publicly announced a new plan envisaging a fierce counter-offensive to seize Pyongyang.

On top of that came a threat by US officials to go ahead with a small-scale version of "Team Spirit", the annual joint military exercise between the US and South Korea, if North Korea refused to oblige the UN agency. North Korea has frequently denounced the military exercise as "preparation" for nuclear war.


North Korea responded by withdrawing into a shell and stating categorically it had an "expedient to counter any other option of the United States, as the option is not open only for a big power". The official commentary added tartly, "The US is too ridiculous if it considers that we will be begging for talks. We are politically, ideologically, militarily and materially ready to cope with any contingency."

The scenario looked particularly grim after the Washington Post published an article by Gary Milholin, who leads a Wisconsin University project on nuclear arms control. Milholin revealed that the US government was planning pre-emptive strikes on Third World weapons plants that "pose a proliferation risk".

Though US army bosses rattled their sabres with great flourish, the voice of reason had not yet been drowned. "If North Korea launches military operations, it will be defeated. But the US would be engaged alongside its South Korean allies in a major war that could leave destruction through much of the peninsula," wrote US undersecretary of state for international security affairs Lynn Davis, in the Washington Post.

Hardliners in the US administration do not think the bargain was worth its while. They feel North Korea got far more than it deserved and described the deal as "nuclear blackmail". The skeptics warned that other would-be nuclear powers could also try similar arm-twisting tactics in the future.

Pentagon officials do not agree. They maintain they wanted to settle the issue quickly because the uncertainty over North Korean capabilities was beginning to stimulate pro-nuclear sentiments in Japan and South Korea. Seoul had urged US president Bill Clinton to despatch the promised Patriot anti-missile systems. Besides, the Pentagon was unwilling to appear dithery over its policy to push a series of arms control measures.

For the time being, an uneasy peace reigns over the planet. It remains to be seen if the handful of crusaders can fight for peace in the face of opposition from the hardliners.