A healthy child, a healthy nation 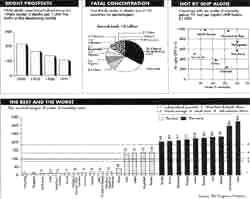 THE ACHIEVEMENTS are quite remarkable. But the challenge that still remains is quite daunting.

During the 1980s, 20 developing countries halved their under-5 death rates -- the number of children who die before the age of 5, per 1,000 live births. In its first report on The Progress of Nations, UNICEF calls this "one of the most revealing indicators of the well-being of children". But there are still some 13 million child deaths a year -- 35,000 deaths a day. About two-thirds of these deaths occur in just 10 countries. China and India have about the same number of births, but India has three times as many deaths.

Income levels alone do not explain a country's under-5 death rate. There are seven countries with a per capita GNP of below $1,000, but which have maintained their under-5 death rates at below 70 -- the internationally accepted goal, which all countries are expected to achieve by 2000. Political will also counts.

UNICEF hopes a day will come "when the progress of nations will be judged not by their military or economic strength, nor by the splendour of their capital cities and public buildings, but by the well-being of their peoples".