Pacific and the Atlantic oceans: key controllers of monsoons 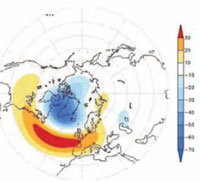 FOR years, the Alipore Met Office in Kolkata predicted the arrival of monsoons in India after El Nino and La Nina. These are atmospheric interactions between the tropical Pacific Ocean and surrounding regions, leading to weather changes. The warm phase of El Nino and the cold phase of La Nina together form the El Nino Soutern Oscillation (ENSO). In April this year, too, the Indian Meteorological Department studied ENSO’s mood and predicted the rains would be normal. By mid-August the department realized how wrong its predictions were: rainfall, this year, measured 29 per cent below average. “Correct prediction of monsoons will help in predicting variability of soil moisture and temperature which is vital for crop growth,” said G C Debnath, director of the Met office.

Scientists from the Institute of Atmospheric Physics at the Chinese Academy of Sciences in Beijing and Department of Meteorology at the University of Hawaii in the US named a new player at the controls: the North Atlantic Oscillation (NAO). NAO forms in the Atlantic Ocean as a difference in atmospheric pressure which oscillates in a see-saw motion from the polar to the subtropical region. The team studied data on global rainfall and found changes in NAO influences the strength of the monsoon that arrives in the country soon after. Zhiwei Wu, lead author of the study, said: “The weakening Indian monsoon might be a result of a strengthened NAO.” ENSO affects droughts and floods in the Pacific region. NAO affects normal sea temperatures in the Atlantic Ocean and that, in turn, affects the East Asian monsoon by developing teleconnections— climate anomalies carried over large distances. The Asian Summer Monsoon System over East Asia is divided into two subsystems: the Indian and the East Asian monsoon system. It touches Indochina, Philippines, China, Korea and Japan and is characterized by a warm, rainy summer monsoon and a cold, dry winter monsoon. The study published in the Journal of Geophysical Research on September 29 said that both ENSO and NAO should be considered for accurate prediction of the monsoon that affects over a billion lives every year