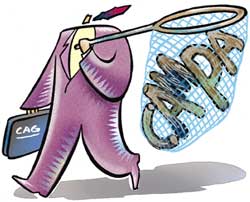 A report by the Comptroller and Auditor General (cag ) has come down heavily on several states for not utilising, in fact diverting, funds meant for afforestation. In a May 5, 2006 verdict, the Supreme Court (sc) referred to the report and decided to requisition the funds from states. The decision incorporates the suggestions of the Central Empowered Committee (cec) -- a five-member body set up by the sc to examine all forestry-related issues.

sc has ordered the formation of an ad hoc body, which will now have to recover all the money collected in the name of the Compensatory Afforestation Management and Planning Authority (campa) from states and transfer it to the bank account, operated by the new body.The Compensatory Afforestation Fund under campa was supposed to be created and operationalised by November 2002, as per a sc judgment that year. The fund, which was supposed to receive all money paid by user agencies towards compensatory afforestation and net present value (npv) of diverted forestland, has still not been formed. Crores of money is lying unused with various officials of states, the court order said.

The 2002 judgment had ordered that any development project on forestland would have to pay for npv -- the intangible benefits against loss of forests, in addition to the loss of trees, which was being charged till then as compensatory afforestation cost. The value of forests for this purpose was set at an ad hoc amount between Rs 5.8 and 9.2 lakh per hectare (ha) -- a one-time payment needed to be made by user-agencies. The money from various states would then be pooled into a central fund, which would be managed by campa and then disbursed for regeneration.

This move, however, had led to much bickering (see 'Why states are against campa', Down To Earth , January 15, 2006). States feared that the centrally-controlled campa would get the right over the money. This led the prime minister's office to ask the Union ministry of environment and forests (moef) to examine the possibility of creating numerous campa -like authorities at the state level. But moef stuck to its decision to constitute just one central body.

Besides recovering money from states, the ad hoc committee has also asked for an audit of all the "monies" received on behalf of campa and examine whether proper financial procedure has been followed in investing the funds.

Meanwhile, compensatory funds are wasting away. According to the cag, an approximate amount of Rs 2,000 crore is wasting away and much of it is lying in non-interest bearing accounts. The body has reportedly calculated that approximately Rs 1,000 crore has been lost as interest. Jammu and Kashmir, for example, has recorded interest loss to the amount of Rs 69.7 lakh; Haryana has lost Rs 9 lakh. Andhra Pradesh has Rs 5 crore lying unused and Rs 25.19 crore diverted elsewhere. Karnataka had Rs 197.79 crore till end-2004, of which Rs 26 crore has been spent on compensatory afforestation. Many states haven't even recovered costs from users of forestland. The cag report says that Madhya Pradesh still has to recover Rs 1.5 crore from users while Haryana has to recover approximately Rs 200 crore.

In response, the three-member bench, headed by chief justice Y K Sabharwal, has instructed chief secretaries of all states to furnish details of money collected, utilised and diverted, to both the cag and the ad hoc committee.

Forest officials contacted, did not want to reveal much. A K Saxena, chief conservator of forests, Maharashtra, did not disclose the total amount with the state in the name of campa, claiming that it is lying with different divisions. "Around 50,000 ha have been diverted for about 70 projects in Maharashtra. But I cannot disclose the amount as it is fluid with compensatory funds being added all the time," he said.

It is, of course, going to pinch the states a lot to return all the money collected since 2002. Compiling records would compound their troubles. campa woes have gone beyond the teething stage.
Supreme Court Afforestation Afforestation Forest Resources Finance Madhya Pradesh News News News US Genetic Disorders Medical Research Science & Technology
SUPPORT US