A rug over Bombay High fire? 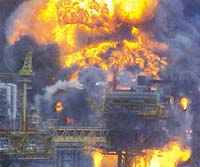 A major accident that hit a platform of Bombay High (bh), India's largest offshore oil facility, on July 26, 2005, has put a question mark on the safety measures taken by the country in oil-exploration activities. The fire killed 12 employees of the state-run Oil and Natural Gas Corporation (ongc) , which operates bh; about the same number are still missing. The blaze is said to have been triggered when a rig collided with the platform. Over 300 workers were onboard the platform when the fire broke out.

Rescue operations suffered majorly because ongc's helicopters couldn't be used due to severe flooding in Mumbai (see p14). bh is about 160 kilometres southwest of Mumbai. The mishap is a significant blow to the country's economy, as bh accounts for 14 per cent of the India's oil consumption and 38 per cent of its production. The fire-hit platform produced 100,000 barrels per day of the 260,000 barrels produced by bh daily.

Union petroleum minister Mani Shankar Aiyar has announced a high-level independent inquiry into the circumstances leading to the mishap. The inquiry would also take stock of the implementation of the recommendations made after a similar fire in 1991. But Aiyar didn't wait for the inquiry's results in giving a clean chit to ongc, blaming the nature for the mishap. "It was a nature decreed accident which could not have been provided for in advance," he said in the Rajya Sabha.

The minister said a small oil spill followed the mishap but it is under control. "We have succeeded in containing an environmental disaster," he declared, pointing out that ongc' s safety record is impressive, as the insurance premium it pays has dropped from us $49.9 million to us $19.9 million in four years.