A sanctuary becomes a battlefield 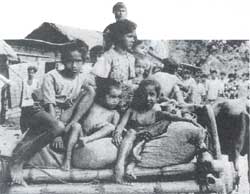 Intelligence agencies of the Assam government have alleged that the 2,387 sq km Manas Tiger Reserve, listed by the UNESCO as a World Heritage site, has become a sanctuary for about 200 Bodo insurgents. The group is alleged to have taken refuge in the sanctuary after a murderous raid on a nearby Muslim settlement last fortnight.

Soon after the assault, police and army parties tracked down the insurgents to the reserve. The deputy director general of the state police, Asim Roy, accompanied a team on elephant back 10 km inside the reserve, but the dense forest stalled further penetration. "We found sufficient signs to indicate that the rebels have a major stronghold inside the reserve," said Roy. The search operations inside the sanctuary have been handed over to the army now, which has already placed a brigade in full battle formation inside the reserve.

Army spokespersons in New Delhi, pointing out that this was the first time that the country's defence forces were conducting a search operation inside a national park, claimed that the troops have been specially instructed to take care not to harm the Manas wildlife. The reserve is home to more than 100 tigers and over 300 species of other animals, most of them endangered. Ironically, no forest official of the state government has so far expressed any concern at the current state of affairs at Manas.