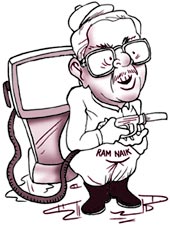 after soft-pedalling on the issue for long and granting a deadline extension, the Union ministry of petroleum and natural gas has finally announced that eight states and four union territories (uts) would be switching over to ethanol-blended petrol by the end of September. But given the fact that the roadblocks which led to the initial postponement still remain, doubts persist about the effective implementation of the programme.

In August 2002, Union petroleum minister Ram Naik had declared that the use of ethanol would be made mandatory in the chosen regions beginning January 2003. Full compliance was to be achieved by June 30 this year. This date was later changed to September 30. Though nine states were originally included in the plan, Tamil Nadu has been exempted since it is yet to thrash out crucial taxation issues. Significantly, this problem is prevalent in other states, too, but to a lesser extent. According to petroleum secretary B K Chaturvedi, the states that will start using the green fuel are Uttar Pradesh, Haryana, Punjab, Maharashtra, Gujarat, Goa, Karnataka and Andhra Pradesh. The uts include Daman and Diu, Chandigarh, Dadra and Nagar Haveli, and Pondicherry.

When the project was unveiled, it was seen as perhaps the first step towards the adoption of renewable energy. The use of ethanol -- which is a biomass fuel derived by fermentation of high sugar or starch crops -- was expected to improve the environment, and benefit the farming community as well as the sugar industry, thus recharging the economy. The programme, however, failed to take off because the production infrastructure for anhydrous ethanol was inadequate, among other things. As a result, oil companies found it difficult to procure enough ethanol and Naik was forced to announce a deferment (see: 'Bottlenecks aplenty', July 31, 2003).

The minister had then said that the states and uts would have to increase the production of anhydrous ethanol, adopt a uniform sales tax of 4 per cent, abolish all export and import fees to ensure smooth interstate movement of the product and simplify excise procedures. "Currently, we have enough capacity to meet the demand of eight states and four uts. But the issues of pricing and different tax rates need to be tackled," points out L N Batra, secretary general, All India Distillers' Association.

To be sure, the petroleum ministry had asked the Tariff Commission -- it looks into industrial costs and prices -- about two months back to determine the correct price of ethanol. The panel has not yet submitted its report. In this scenario, the road ahead appears pockmarked with potholes.