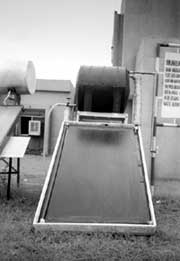 geyser manufacturers could soon be out of business in Haryana. As a part of its energy conservation effort, the state government has made the use of solar water heating system (swhs) mandatory in private functional buildings such as hospitals and hotels. A regulation that makes the installation of swhs compulsory in government and public sector undertaking structures is already in place in the region. The authorities are also contemplating the inclusion of private residential houses in the project.

Responding to the directive of the state government, the Haryana Urban Development Authority (huda) has stipulated that swhs be made mandatory in all residential and institutional buildings having an area of 836.12 square metres or above.

B S Yadav, project director of department of non-conventional energy sources (nces), Haryana, says that setting up the swhs is an uncomplicated process as the equipment required is very basic in nature. Moreover, the maintenance cost is negligible. The system comprises a collector that traps the sun's heat energy, a cold water tank, a hot water tank and pipes. Solar energy heats the collector surface and this heat is transferred to water, which flows through tubes attached to the collector. Other requirements are merely a shadow-free roof and a three-square-metre area. "According to a study conducted by the state nces department, a lot of energy could be saved if a 100 load per day swhs -- functioning at 60 degrees centigrade -- is used. In terms of energy conserved annually, this would translate into any of the following: 2127 kilogrammes (kg) of firewood, 380 litres of kerosene, 265 litres of liquefied petroleum gas (lpg), 891 kg of charcoal, 231 litres of diesel or 2230 kilowatt per hour of electricity," reveals K K Khandelwal, director and special secretary, department of nces, in the state government. Load per day pertains to the energy generated by the solar heat collector daily. "The cost of the swhs varies from Rs 17,000 to Rs 1,40,000," he adds.

There are at least 46 swhs manufacturers in the country, of which five are in north India. Doubts about the heating system crashing in a sunless season are unfounded because an auxiliary power back-up would be in place for an emergency, point out officials.

"Those who have adopted the swhs are satisfied," says S S Bedi, director, Union ministry of nces. "I think that this concept will work," says Arjun Ahuja, manager of Imperial Hotel, Chandigarh. The future of the project hinges on the satisfaction levels of the users.