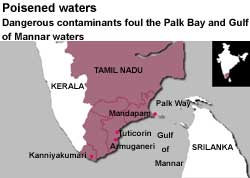 the Chloralkali industry in Tamil Nadu is spewing out effluent into the Gulf of Mannar and Palk Bay. The waters in the region have consequently been contaminated with lead, cadmium and mercury. Researchers at the Offshore Platform and Marine Electrochemistry Centre at the Central Electrochemical Research Institute in Tuticorin, Tamil Nadu, have detected the presence of three metals in the waters of the region. They suggest that the contaminants' presence might be responsible for the disappearance of the once-famous pearl-bearing oysters found in the region.

Researchers chose fifteen locations in Kanniyakumari, Arumuganeri, Tuticorin, Mandapam and Thodi towns. They analysed water as well as sediment samples. The presence of mercury was tested only in seawater (Indian Journal of Marine Sciences , Vol 29, June 2000).

The concentration of the metals was found exceptionally high off the shores of the town Arumuganeri in district Tuticorin (see map: Poisoned waters). The cadmium content in the sediments was found to be higher near the shore as compared to distances off the shore. This indicates that it is the effluent emanating from industry that is responsible for poisoning the water. The levels of cadmium observed were in general higher than those reported for the western Bay of Bengal but less than those reported for the Cochin estuary. The lead content, on the other hand, is nearly the same as that reported in the western Bay of Bengal by other studies. Only in the case of Kanniyakumari and Mandapam is the content higher. The mercury concentrations seemed to increase from the Palk bay area towards the Gulf of Mannar and were higher than those reported elsewhere for the region.

Chloralkali plants and pulp and paper manufacturing units discharge large quantities of mercury-based compounds through their effluents. These are responsible for the increase in cadmium content of the sediments and the prime source of mercury contamination in the region.