A victim of urbanisation 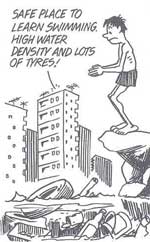 The wetlands of Bangalore are falling prey to rapid urbanisation, according to a paper prepared by a group of researchers. The report says urbanisation is also affecting water quality. It notes the number of water tanks within the city limits has declined to 16 from 140 in 1931, primarily because of construction activities. The report adds that the numerous brick kilns throughout Bangalore extract mud from pits dug in tank beds. The weakened walls of the pits collapse because of the increased flow of water during the rainy season, resulting in heavy silting. This has been coupled by the indiscriminate dumping of urban sewage.

The report has urged curbs on mud lifting and the establishment of an efficient sewage treatment system in the city. Says A N Yellapa Reddy, Karnataka's environment secretary, who prepared the report with three others, "We are aware that strong public pressure will be necessary if any of our recommendations is to be carried out. The others who prepared the report were B K Chakrapani of the University of Agricultural Sciences and N Srinivasan and O Naveen of the Foundation for Nature Exploration and Environment Conservation, both in Bangalore.