A year on, no lessons learnt from Bihar mid day meal tragedy 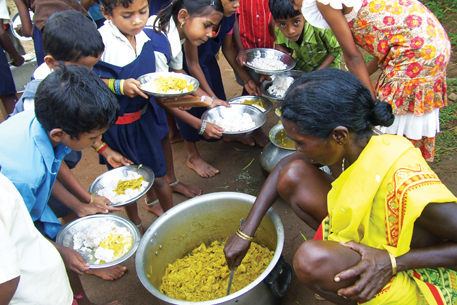 A year after 23 school children in Bihar's Saran district died of insecticide poisoning after consuming food served under Mid Day Meal (MDM) Scheme, government agencies seem to have forgotten the serious concern over handling and banning of hazardous chemicals that the tragedy raised.

The children of Dharmasati-Gandaman Primary School were served food prepared in cooking oil that had been kept in a can of insecticide, which led to their painful and agonising death.

Gopal Krishna of advocacy group ToxicsWatch Alliance pointed out that at the time of the incident the Union ministry of agriculture and the Central Insecticide Board had assured that proper guidelines would be prepared for handling and banning of pesticides.

Focus on infrastructure, not health

But in Gandaman village where the tragedy occurred, the focus of the district authorities is on providing a new school building, community hall and roads to the village.

Nigam Prakash, head of paediatrics department at Patna Medical College and Hospital, who treated the students from Dharmasati-Gandaman Primary School, revealed that the hospital on an average receives five to seven cases of pesticide poisoning among children each week.

“There is need for proper handling of pesticide or even banning them,” he said. He also warned that pesticide side-effect is a long term affair. Poisoning by monocrotophos insecticide leads to accumulation of toxin in the fats of children that releases slowly. “It might lead to convulsions even five years after treatment,” he said.

District magistrate of Saran, Kundan Kumar is trying to make Gandaman panchayat a model village. “We cannot do much on the issue of pesticide. It’s a policy matter that has to be decided by those higher up in the hierarchy,” he said.

Civil society organizations under the banner of India for Safe Food, have meanwhile, released a report—Serving Death? – A case for safe food for children in India—asking if the country has learnt its lessons from the Bihar tragedy.

The report is a collection of information on toxic effects of pesticides and shows how children are vulnerable to the adverse impacts of pesticides. It suggests toxin-free food for children under government food schemes and reminds of the UN FAO recommendation of urgent withdrawal of hazardous pesticides.

Using examples of innovative approaches to organic and safe food being served to children in schools, both by civil society and government efforts, the report exhorts the government to ensure that food schemes for children should be used to ensure that the environment and food of children is toxin-free, by replicating and scaling out these successful models and suggestions.

“The Bihar incident involving children and pesticides is not the first such incident. We urge the government to recast the Pesticides Management Bill pending in the Parliament,” said Kavitha Kuruganti of ASHA (Alliance for Sustainable and Holistic Agriculture).

Rachna Arora of India for Safe Food said the Integrated Child Development Scheme (ICDS) and MDM guidelines issued after the Bihar tragedy do not even mention the risks emanating from pesticides. No action has been taken on FAO’s recommendations to speed up the withdrawal of dangerous pesticides. The least that should be done is to ensure that at least children have access to safe food in all government schemes,” Arora said.

The report presents global scientific evidence on how children are highly vulnerable to pesticides due to a variety of reasons. Public health expert, G P I Singh of Doctors for Food and Bio-Safety, sais: “World over, there is an increasing realisation that children are more susceptible to the harmful effects of pesticides. Children are being ‘born polluted’, as studies have shown. We have a special duty to protect our children from the harmful effects of pesticides”.

It is now well established that there are alternatives to synthetic pesticides for successful pest and disease management in agriculture. In Andhra Pradesh, non pesticidal management of crops (NPM) has been scaled up to thousands of hectares by the government through a programme called Community Managed Sustainable Agriculture (CMSA), through the involvement of women’s self help groups and community level resource persons.

The civil society groups alleged that despite tragedies like the one in Bihar, there is no attempt by governments to acknowledge the negative impact that pesticides have and to supply safe and organic produce to children. Some state governments and NGOs are trying to provide pesticide free food for children under MDM and ICDS schemes through innovative methods like kitchen gardens; however, these are being done at a small scale and there is an urgent need to scale out these efforts, said activists.

There is no such efforts being made in Bihar whatsoever. The state human resource development department is focusing on safe preparation of mid-day meal but is not looking at safe food material as such.

The department has sanctioned separate funds for construction of kitchen in government schools to prepare mid day meals. “Construction work has been completed in majority of the schools. In some of the schools we are facing problem of space that would be resolved soon,” said Kamlesh Jha, deputy director in charge of MDM.