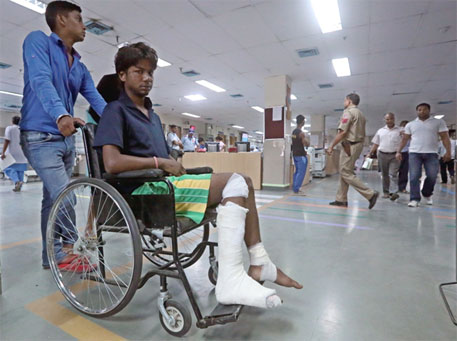 Developing better health infrastructure and use of technology to streamline health services are among the major pre-poll promises made by the Aam Aadmi Party in the run up to Delhi Assembly elections. Promoting generic medicines and reducing health costs for the elderly also form an important part of the manifesto to be released by the party.

"We would like Bhartiya Janata Party to give a point-by-point response to our promises," said a source in AAP.

AAP has promised to increase the healthcare budget by almost 50 per cent, from the current Rs 2,700 crore to Rs 4,000 crore. In a bid to reduce the burden on hospitals, the party proposes to add 900 primary health centres to the existing 300. The number of beds in secondary and tertiary care hospitals will be increased to 40,000 from the existing 10,600, it says. Of these, 4,000 will be reserved as maternity beds.

"The rate of institutional delivery in Delhi is 80 per cent, which drops to as low as 50 per cent in rural parts of the city, including bastis and slums. We will try to improve that," said Satyendra Jain, former Delhi health minister in the AAP-led government. Children will be given 100 per cent free immunisation.

To reduce out-of-pocket expenditure of the patients, 100-odd counters for generic medicines will be opened by the government if AAP comes to power. Sources said that this decision was taken because private medical shops were not interested in promoting generic drugs due to lower profits. Senior citizens will be given medicines free of cost. "From our experience last time and based on our calculations, we know that the price will not be too high and it’s manageable," said Jain.

In a bid to make Delhi’s health system technically strong, the manifesto proposes 100 per cent computerisation of all Delhi government hospitals. The previous AAP-led government had started a pilot hospital management system in Lok Nayak Hopsital which enabled all doctors to access details of patients, reports of tests and medical history on computers.
It has also promised an online facility for appointments to reduce queues outside government hospitals’ outpatient departments (OPDs).

The manifesto states the party will fill vacancies for 4,000 doctors and 15,000 paramedics and abolish contractual appointments. Outpatient hospital hours will be increased to include early morning and late evening timings to help working patients.

AAP has modelled its strategy for health infrastructure on Narayana Health, a chain of low cost hospitals in India. "We realised that infrastructure can be built in one-fifth of the cost that was usually accrued by the previous governments. We will apply formula of economies of scale in which treating a large number of people brings down costs," Jain said.