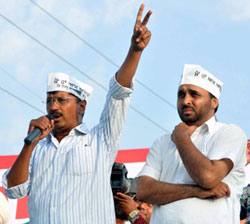 After years of silence, the issue of drugs abuse snowballed into a full blown election issue, and became the deciding factor, this Parliamentary election in Punjab.

Bhagwant Mann, AAP candiatate from Sungrur who won by more than 200,000 of margin, was vocal about the issue of drug abuse. He even made a video featuring victim of drug abuse and suffering of family members, which went viral in the state. “I will not let our state become Afghanistan. We will work to regain our old glory of Punjab,” said Mann after he was declared  winner.

Media had widely reported the involvement of Majithia in a drug racket case, filed by Patiala police a few months ago. The AAP candidates lapped up this issue which no one else seemed to be concerned about and went on the offensive against the incumbent government led by Shiromani Akali Dal (SAD) and BJP. Later, sensing the mood of public, the main opposition party Congress also raised the issue at almost every public meeting and questioned the state government. Amrinder Singh, former chief minister and senior Congress leader, attacked the family of chief minister Parkash Singh Badal for patronising Majithia at public rallies.

The Punjab Pradesh Congress Committee (PPCC) demanded a thorough and fair probe by the CBI into the nexus between politicians and the drug mafia and put the responsibility on chief minister Badal. “The investigation into the entire drug racket must be handed over to CBI as the easy availability and manufacture of drugs within the state is not possible without political patronage and police nexus,” Pratap Singh Bajwa, PPCC chief wrote in an open letter to the chief minister. “Very dreadful dimensions of this problem had come up during the election campaign. This is the ugly underbelly of Punjab,” Bajwa stated.

Facing questions from AAP and Congress, the Punjab government chose not to speak much on this issue and shifted the onus on the Centre. “It is the failure of Central agencies and Border Security Force not to monitor illegal trade of synthetic drugs from across the border,” Badal said at election rallies. BJP prime ministerial candidates, Narendra Modi, hold Pakistan responsible for such drug abuse and termed it as ‘Narco Terrorism’ during his election campaign in Amritsar.

Pesticide gets a miss

None of the parties, except AAP, raised the issue of unrestrained use of pesticides in agriculture, which is lowering the quality of soil and causing cancerous diseases. Jasraj Singh Longia, AAP candidate from Bathinda parliamentary seat, called for minimum use of pesticides. Longia lost in the election. Neither SAD nor Congress candidates discussed this issue.

According to an estimate, nearly 80,000 people died due to pesticide-related cancer in the last decade, says Hemant Goswami of Kheti Virasat Mission, a Punjab based non-profit advocating organic farming. “Parties were just talking about organic farming which they mentioned half-heartedly in its manifesto, but silent over pesticides,” said Goswami.

Drugs abuse and excessive use of pesticides are wreaking havoc on Punjab. Experts say the state may lose an entire generation to rampant abuse of smacks, heroin, and synthetic drugs. In 2009, the Punjab government had mentioned in its affidavit to the Punjab and Haryana Court that 67 per cent of rural households have at least one drug addict in the family.

“One estimate states that around 70 per cent of youths and 60 percent of school going children are victim of drug abuse,” says Shashikant, former state DGP (prisons) who is also leading an anti-drug campaign in the state, Nasha Virodhi Manch. In September last year, Shashikant had filed a public interest petition in the court, demanding it to monitor the investigations into the nexus between smugglers and politicians. The court turned down his demand. “The court cited reasons of unavailability of facts and satisfied by the probe by government agency,” says Shashikant.

Shashikant, who policed the state for over 30 years, says geographical proximity with Pakistan and Afghanistan is proving to be a bane for the state. Punjab shares 550 km of its border with Pakistan. “Traditionally, drug peddlers used the route of the Golden Triangle of Afghanistan-Iran-Turkey to smuggle drugs into India. The route became less favourable due to difficult terrain, internal strife and war. In the late 1970s, an alternative route was discovered known as Golden quadrilateral which consists of Afghanistan, Pakistan, Punjab and the US. The supply slowed down due to militancy in Punjab but it gained momentum in early 1990s, and is at its peak now. Though the supply of heroine and smack has come down, they have been replaced by pharmaceutical drugs, especially pain killers, he adds.

In the last eight to 10 years, synthetic drugs have deeply penetrated into states. The chemist shops in the state are illegally selling drugs like Buprenorphine, Parvon spas, Codex syrup and spurious Coaxil and Phenarimine injection. “Every day, nearly 14 cases registered and more than a dozen people booked under the Narcotic Drugs and Psychotropic Substances Act,” he adds.

Responding to an RTI query, the government had said that 78,000 drug peddlers caught in the last 10 years. “Then who is running this show. Why the police is not able to arrest the kingpin yet,” questions Shashikant. He indicated the involvement of ministers and high rank police officers in the nexus.

In the border areas of Punjab, 44.3 per cent of drug addicts are less than 25 years old and most are illiterate, according to a study by the Institute for Development and Communication (IDC). Around 65 per cent of the addicts “do” drugs twice a day. The rich prefer high grade heroin while poor make to do with smack and synthetic drugs off local pharmacy.

Brij Bedi, Amrtsar-based social activist who has been working with children who lost their parents due to drug abuse, says, “In Maqboolpura school in Amritsar, 70 per cent of the 600 students have lost a parents to drugs.”