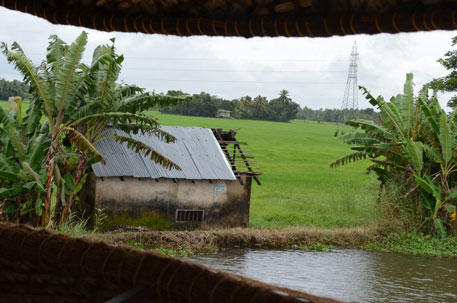 Kerala has a law that protects paddy fields and prohibits their use for any other purpose. But deputy chairperson of Planning Commission, Montek Singh Ahluwalia, is all for putting paddy fields to more lucrative uses. He said that Kerala should move on from its insistence on traditional paddy cultivation and use the farms for creating IT hubs and tourist resorts. He was speaking at the plenary session of the recently concluded global investors' meet at Kochi, Emerging Kerala.

As for food security of the state, it could be met by production of rice by other states, he said. This exhortation, made in the presence of the prime minister and the chief minister, has provoked politicians and civil society members alike. Leader of opposition, V S Achuthanandan, said the remarks were against the spirit of the law passed by the Legislative Assembly against conversion of paddy land for other purposes. Congress leader V M Sudheeran said Ahluwalia’s comments were a reflection of the attempts of corporate bodies and land mafia to grab paddy fields.

Ahluwalia repeated himself at press meets and interviews the next day. Farmers should not be locked into paddy; they can use part of the income from IT hubs and tourist resorts to buy rice from states such as Bihar where labour charges are much lower, he said. If the conventional methods of paddy cultivation continue, the state will have to highly subsidise it, he added.

Food and water security at risk

“The Planning Commission deputy-chairperson’s statement is an affront to the officials, scientists, planners and farmers of the state, who have been making all out efforts to protect paddy land and wetlands,’’ says Usha S, national convener of Save Our Rice campaign, a network of interested groups working for the sustainability of paddy cultivation. She also points out that paddy fields are not merely production centres of paddy, but are wetlands and the richest water source of Kerala, maintaining the water table. If the average water level in a paddy field is one foot, an acre (0.4 hectare) of the field would be holding 1,200 cubic metre (1.2 million litres) of water. This percolates down and replenishes the ground water. This year the south west monsoon failed and four out of the 14 districts have been declared drought affected, an unprecedented event during monsoon months.

According to the Kerala State Planning Board, the state lost over 500,000 hectares (ha) of land under paddy cultivation between 1980 and 2007 to various other sectors, and as of 2010-11 there are only 213,000 ha under paddy cultivation. The present paddy production is only around 625,000 tonnes whereas the requirement is assessed at 3.5 to 4 million tonnes per annum.

Agricultural scientist K P Prabhakaran Nair, who has served as a consultant with FAO, says that the state is heading for a crisis with only about 10 to 15 percent of the required rice being produced. “The words of the deputy chairperson, without understanding the realities of the state, are totally unwarranted,” he says.

In his statement, V S Achutanandan has pointed out how leaders at the Centre, starting from Jawaharlal Nehru, have always pressurised the state to shift to cash crops with the promise of making good the deficit from other states. The shift had started right from the first Five Year Plan, in which the focus was on agriculture. The country was badly in need of foreign exchange then and the cultivation of spices, tea and rubber was encouraged on leased forestland and with huge subsidies. The message was taken by the farmer. Paddy’s prominence started to wane.

In the aftermath of the famine like situation in Kerala in 1964, the promise to Kerala to make good the deficit was kept and statutory rationing was started. Common people could get as much as two-thirds of the rice required apart from wheat from ration shops. A high 98 per cent of the population was covered under the Public Distribution System (PDS). Things however changed with economic reforms and targeted PDS became the norm. Rice availability through PDS reduced to as much as 86 per cent at one point of time. “Successive food ministers of Kerala had to suffer the ignominy of their demand  for additional food grains allocation being rejected,” says Achutanandan. Now the call is to convert paddy fields, for construction of hotels and self-financing institutions for investors.

The apprehensions of the public and environmentalists are not misplaced.  On September 13, a panel of the Union environment ministry recommended clearance for the Aranmula International Airport on over 200 (ha) of paddy field in Pathanamthitta district. The recommendation was made on the basis of an averment made by the promoters, K G S Aranmula International Airport Ltd, that there is no paddy cultivation happening there for the past 10 years and that the state government has notified the land as industrial area. The principal secretary of the state’s environment department endorsed this. However, the local people including the Congress party office bearers refute this and claim that the land was under cultivation till 2011. A hartal was organised in Pathanamthitta on the first day of the Emerging Kerala conference to protest the sanctioning of the airport.

“A planner is expected to be creative about the future,” says Mullakkara Retnakaran, former minister for agriculture. “But he (Ahluwalia) is like an anthakan vithu, the terminator seed,” he adds. The ambitious project, Ellarum Paadathekku or One and All to the Paddy Field, was launched  in 2009 to encourage the farmers to cultivate their land instead of leaving it fallow, by providing incentives like free seeds, subsidised fertilisers and higher price for paddy. “For the first time since 1970, the production of paddy increased over the previous year in 2009-2010 and then in 2010-11,” claims Retnakeran.

What happens to paddy promotion campaign?

Consequent to the concerted efforts of the previous government and various organisations, an awareness was created among the people against the conversion of paddy fields into commercial or residential areas, says Usha. Local bodies were also involved in encouraging paddy cultivation in fallow paddy fields. Nearly 40,500 ha have been brought under cultivation mainly by women under the initiative of Kudumbasree, with most of the land being taken on lease. They will lose their livelihood points out Usha, if paddy is abandoned. Thus, it is economy as well as ecology that will be seriously affected.

Usha also agrees that the statements of Ahluwalia may not have been off the cuff remarks, but a deliberate ploy to give a moral boost and justification to the sponsors of Emerging Kerala, who ultimately want to get hold of land. And where else is land available in Kerala other than in forests, plantations and paddy fields?