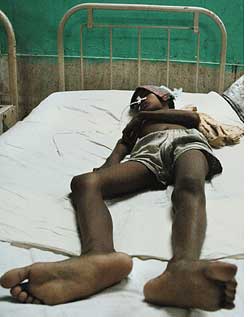 acne and Japanese encephelitis (je) cannot really be spoken of in the same bracket. But if the results of a new study by the National Brain Research Centre in Manesar are validated, patients infected with the deadly virus might get the same treatment as adolescents with acne blotches. A simple acne drug, minocycline, has been found to be effective in treating je.

According to the study, published in Journal of Neurochemistry in February 2008, minocycline can effectively counter je, commonly known as brain fever, by reducing the speed of virus replication and checking the death of nerve cells. The antibiotic also reduces the activity of microglia, cells that kill healthy neurons, disrupting the brain's normal functioning.

Brain fever is caused by a virus that gets transported from pigs to human beings through mosquitoes mainly during the rainy season. Approximately three billion people live in je virus endemic areas. The virus is active in India, China, Japan and all of South-East Asia. In 2005, the disease claimed nearly 1,000 people in Gorakhpur, Uttar Pradesh.

National Brain Research Centre researchers, Anirben Basu and Manoj Kumar Mishra, infected mice with je virus and then observed the effect of minocycline administered on them. "We found that the drug could protect the rodent against degeneration of cells in the central nervous system," Basu said. The findings of his team are significant because there are no effective antiviral drugs against je. Vaccine does prevent the disease, but it is very expensive. "The vaccine generally used in the country has many limitations. It is difficult to transport this vaccine to remote areas, it has been found to be effective in only 50 per cent cases and also has serious side-effects," Basu said.

Doctors at the Baba Raghav Das Medical College, Gorakhpur, say they will undertake clinical tests of minocycline on humans soon. "The proposal to conduct the tests has come from the union government's Department of Science and Technology. The trials will start by the end of July, the epidemic season," K P Khushwaha, head of the college's pediatrics department, said.