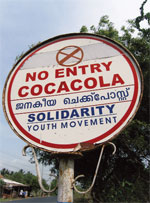 JUST before the Kerala Assembly was dissolved for elections, the state’s Left Democratic Front government passed a law to secure compensation for people affected by Coca-Cola’s bottling operations at Plachimada in Palakkad district.

The law, passed unopposed on February 24, provides for a three-member tribunal which will adjudicate on claims for compensating losses resulting from Coca-Cola’s operations, which include groundwater pollution and depletion, loss of agricultural land, loss of jobs and health problems. The tribunal will have powers equal to that of a civil court and can issue summons and examine witnesses.

“The Act reflects the will of the people and it has to be respected. Coca-Cola should now pay the damages voluntarily as part of its social responsibility,” said R Ajayan of the citizens’ front, Plachimada Solidarity Committee.

The Plachimada Coca-Cola Victims Relief and Compensation Claims Special Tribunal Act is a historic legislation that “sets a precedence for companies that think depletion of natural resources is alright,” said S Faizi, environmentalist and member of the Plachimada high-powered committee. The Act is based on the recommendations of the committee, which submitted its report in March last year, holding Coca-Cola responsible for causing pollution and water depletion in Plachimada.

The committee, formed by the state government on the recommendation of the state groundwater board in May 2009, had assessed the damage caused in and around the Plachimada bottling plant at Rs 216.26 crore. The committee headed by additional chief secretary K Jayakumar had based its recommendations on the “polluter pays” principle, (see ‘Coca-Cola asked to pay Rs 216 crore’, Down To Earth, April 15, 2010).

The Act now legally binds Coca- Cola to follow the directives of the tribunal. “We also want the government to initiate criminal proceedings against the company,” said Ajayan. The high-powered committee report had said that in its four years of operation in Plachimada, the cola plant had violated eight laws, including the Water Act of 1974, the Environment Protection Act of 1986 and the Hazardous Waste (Management and Handling) Rules of 1989. Violation of the laws is sufficient ground to initiate prosecution.

The beverage company is miffed with the piece of legislation. It called the bill a populist measure cleared in haste on the last day of the Assembly to garner votes in the forthcoming elections. Activists refuted this. The law should have been passed long ago because the high-powered committee report was submitted in March last year, said C R Bijoy of advocacy group People’s Union for Civil Liberties who has been working for the rights of Plachimada victims.

When contacted, a company spokesperson said: “We are disappointed with the bill and the flawed process on which it is based.” He said the bill is not based on facts, scientific data, and inputs given by the company. The company was at no point of time “given opportunity to present facts, engaged in dialogue or allowed to share independent data before the Bill was tabled.”

The beverage company has refused to acknowledge that its bottling plant harmed village residents. It has questioned the validity of the high-powered committee. The company spokesperson said any government panel should have first determined through scientific study and established process of law, whether any damage was caused to the residents. Second, it should have determined who or what was responsible if such damage was caused, he said.

Jayakumar explained that the mandate of the high-powered committee was not to assess the damage. “The damages were already assessed in earlier reports. We were to quantify the extent of damage and the inter-relatedness of the damage,” he said.