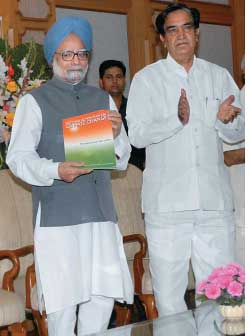 INDIA released its much-anticipated action plan to mitigate and adapt to climate change on June 30, almost a year after it was announced. Coming a week ahead of the G-8 summit, the plan was welcomed by both industry and environment groups, though not without some reservations.

The action plan "outlines a number of steps to simultaneously advance India's development and climate change-related objectives". A detailed strategy will be worked out by December. Though it encompasses a range of measures, the plan focuses on eight areas, which it calls its missions. These are solar energy, enhanced energy efficiency, sustainable habitat, management of water resources, sustaining the Himalayan ecosystem, enhancing ecosystems such as forests, sustainable agriculture and establishing a research platform for climate change.

The action plan was to be out prior to climate conference in Bali last December but the draft was criticized because it merely spelt out steps the country had taken and lacked a future strategy. On June 2, some members of the prime minister's council on climate change critiqued another draft. They said the text referring to energy efficiency and mitigation options was inconsistent with India's international position (see 'India acts', Down To Earth, June 16-30, 2008).

The Federation of Indian Chambers of Commerce and Industry (ficci) has supported the final plan, saying the eight missions will be important to leverage key initiatives that industry and others are undertaking. The solar energy sector has got the much-needed impetus. Greenpeace also regarded the focus on solar energy as the highlight of the plan. The solar and renewable programmes showed foresight in energy planning and an intention to capitalize on the country's potential for solar energy, said the organization.

The market-based mechanism for energy efficiency across industry sectors will be a great driver for energy savings, according to ficci. Greenpeace, however, thought otherwise. "We are disappointed that on the energy efficiency front, the plan is both unambitious and vague about what the country is setting out to achieve," said Vinuta Gopal, climate and energy manager with Greenpeace India. The energy saving expected from the mission was so small that it could be done by merely replacing incandescent bulbs by cfls, said Greenpeace said in a press release.

The energy targets were unambitious because the plan focused on voluntary efforts and market mechanisms, said Greenpeace. It called for mandatory norms to be put in place to make the shift to a low-carbon economy. "We believe that India can take China's example in having clear timelines and targets on both energy efficiency as well as expansion of renewables, while not succumbing to pressure from the developed countries on the international negotiation front," said Gopal.

The plan also lays out an institutional structure for the implementation of the missions to be overseen by the climate council (see 'Modeled to function', Down To Earth, May 16-31, 2008). Prime Minister Manmohan Singh said the plan would evolve in response to new scientific knowledge and international climate talks. He invited broader interaction with civil society.

A group of civil society organizations, including Greenpeace, however, had sent a letter to the prime minister in June pointing out lack of transparency in preparing the plan. They said there was no process of consultation with civil society or independent scientists and researchers, and demanded that the plan be discussed well.