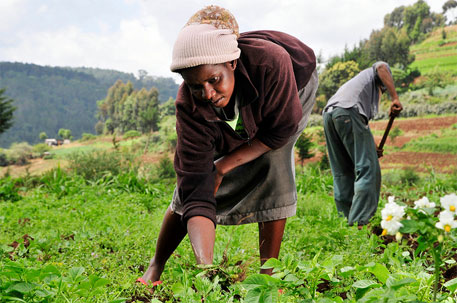 Africa’s efforts to boost regional food security got international recognition last week when the United Nations' Food and Agriculture Organization (FAO) congratulated African leaders for "raising the bar" in the fight against hunger. The international food agency also stated that a major priority was to cut the food import bill and reduce dependence on imports.

In the African Union (AU) general assembly session, organised at Malabo in Equatorial Guinea, African leaders formally committed to a number of bold goals to reflect “The Vision of the Agriculture We Want”, including “Ending Hunger by the year 2025 and Improving Nutrition”.

Most of Africa’s cities are growing and there is a rising demand for food in both national and regional markets, currently largely fed by food imports. In the assembly, FAO director general José Graziano da Silva stated that cutting import was a priority and with over 11 million youth expected to enter labor markets over the next decade, Africa's agriculture sector could be a catalyst for inclusive growth.

In an additional sign of a renewed focus on the catalytic role agriculture can play for Africa, the AU has also designated 2014 as the Year of Agriculture and Food Security in Africa. "There is an urgent need to value our local and traditional nutritious food and bring back the issue of eating well", said the international food agency.

It is important that the family farmers in Africa get support that goes beyond technology, to include credit and access to markets and knowledge. Among the other focus areas identified during the meeting are the conditions that favour private investment in agriculture, which need to be encouraged. These investments should also be able to increase the food security of rural populations and encourage land ownership. Social protection remains a concern for Africa and can be addressed by adopting a more comprehensive approach and initiatives like conditional cash transfer programmes and cash-for-work programmes, the leaders said.

Africa is a continent where small scale and family farmers work over 60 per cent of the agricultural land. The region is not only aiming at ending hunger by 2025 but also working to make agriculture climate smart by making crops less vulnerable to heat and drought and turning depleted soils into carbon sinks to deal with challenges that lie ahead.

A recent FAO report had highlighted a few success stories from the continent where people are practicing smart agriculture, forestry and livestock rearing to make lives sustainable. A project run by FAO and farmers together in Kihamba in Mount Kilimanjaro, Tanzania, aiming to maximize the use of limited land, provide a large variety of foods throughout the year, and maintain groundwater health, is one example.

Report: Healthy harvests: the benefits of sustainable agriculture in Africa and Asia