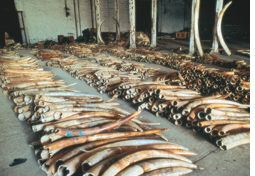 there will be no ivory trade in Africa for the next nine years. African countries have reached the first-ever consensus at the conference of parties to the un convention on wildlife. The countries say it will help check dwindling populations of the African elephant (Loxodonta africana). The Convention on International Trade in Endangered Species of Wild Fauna and Flora (cites) held at The Hague also decided to set up an African elephant action plan to strengthen elephant management across the continent.

The decision, however, allows a few countries in the region, which have a surplus population of elephants, to go for a one-off sale of their ivory--collected till January 31, 2007. It also supported India's attempts on tiger conservation (see box: Burning bright).

Botswana, Namibia, Zimbabwe and South Africa, however, demanded regular ivory trade because of increasing elephant populations. This, they say, will benefit farmers for whom elephants spell trouble. But Kenya and Mali argued for a complete ban of 20 years, backed by 11 central and eastern African countries and animal welfare groups. Many southern African countries were earlier allowed to export ivory, especially to Japan. But a ban on international trade in ivory came in 1989.

The Hague decision, however, allows Japan to buy the government-owned ivory stock but it won't be allowed to re-export it. "The carefully regulated trade in ivory has been successfully producing a thriving elephant population. This will stop now. cites should find ways to support regulated trade than this one-off sale," said Eugene Lapointe, president of a Switzerland-based ngo.

"Ivory trade will fuel illegal poaching. This will have severe impacts on tourism, which supports our economy. We will protect it at any cost," said Steve Itela, director of Youth for Conservation, a Nairobi-based wildlife conservation group.