Despite official claims that agriculture must continue even with restrictions, supply chain has been severely affected in Rwanda

Women farming in Rwanda. Agriculture has been affected by the COVID-19 pandemic in East Africa. Photo: Christophe Hitayezu

The novel coronavirus disease (COVID-19) outbreak has severely impacted economic activities in Africa’s Rwanda. Agriculture is one of them.

Despite official claims that agriculture must continue even with restrictions in place to curb the COVID-19 spread, farmers have been facing difficulties.

“Inputs are prepaid to an accredited wholesaler. I travelled around an hour on my motorcycle to get to office, but it was closed. I called up their employees, but they could not come due to lack of public transport,” he said.

People who needed DAP were resorting to other fertilizers potentially harmful to their crops, he added.

“Essential services continue to be delivered so that food chain is not disrupted,” a statement signed by Gerardine Mukeshimana, Minister of Agriculture and Animal Resources, Rwanda, read.

Despite guidelines, experts said the ban on movement has affected multiple sectors, including agriculture.

“Some people earn from non-agricultural businesses to get investment, which are now shut. Others who sent money to their relatives for agricultural purposes are now using it for their own survival. Most fertilizers and seeds retailers use public transport, which is currently unavailable,” said Teddy Kaberuka, an economist.

According to Africa Agriculture Status Report 2018, about 70 per cent of the continent’s population work as smallholder farmers on land less than two hectares. The lockdown has dealt the most severe blow to them.

“The money I earned from cleaning at a school used to help me cultivate crops. But schools are now shut and I am unable to earn. I don’t have the money to get seeds and fertilisers,” said Theogene Bahanugira, a smallholder farmer.

“We employ several daily wagers, but have stopped in lieu of social distancing measures. When I wanted to transport bean stakes for my farm, I was told that I will have to get permission for the same. So I decided to hire people to do the job. This increased the cost of production,” Joseph Gafaranga, farmer and secretary-general, Imbaraga Farmers Organization said.

To cope with the challenges, Director-General of Rwanda Agricultural Board, Karangwa Patrick, advised farmers to shift to mechanized farming.

However, the Director-General of the United Nations Food and Agriculture Organisation, QU Dongyu said on March 28 that restrictions of movement may impede farming processing.

Shortage of fertilizers, veterinary medicines and other input could also affect agricultural production. 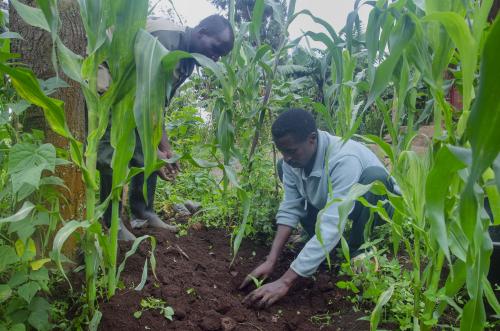 Mainza Mugoya, regional coordinator, African Seed Access Index (TASAI) at the regional office in Kenya, said the impact will vary depending on the restrictions imposed by different governments.

“Since this is the planting season in East Africa, the potential impact could be disrupt seed marketing and distribution. Some seed companies are already cutting down on their staff,” he said.

He added that some countries import a significant percentage of seeds and restrictions on regional trade will severely impact their delivery. Social-distancing restrictions will limit seed companies’ ability to reach farmers as well.

The supply chain has been largely affected due to restrictions on public transport.

“Those expected to be on duty are facing transport difficulties. There are also afraid to travel. We started supply procedure five days ago and made the delivery today. Earlier, the process would take a one day,” said Innocent Harerimana, head of fertilizer unit at ENAS Enterprise, a company that makes customized fertilizers, Rwanda.

One Acre Fund is among the biggest suppliers in the country, serving over one million farmers across East and Southern Africa.

“Given the social distancing guidelines, we’ve reduced our activities in the field and are now offering round-the-clock support to our farmer clients remotely. The time that restrictions were put in place, we had actually conducted a lot of our fertilizer and seed distribution to farmers,” John Ohaga, Africa communications manager, One Acre Fund, said.

He added that they had some top dressing fertilizer to deliver, for which they have been working closely with the governments.

In general, most fertilizers used in Africa are imported while those produced in the continent are exported. Nevertheless, some degree of inter-regional and intra-regional trade in fertilizers also takes place.

Borders closures resulted in delays and restrictions. Since mid-March, Burundian immigration has reportedly been refusing entry of different cargo trucks transiting through Rwanda, contrary to the resolutions made by ministers in charge of health and EAC affairs.

The ministers on March 25 had directed all partner states to ensure that trucks and vehicles carrying goods have at most three crew members per vehicle to facilitate smooth border crossing in the region.

However, some African countries, such as Tanzania and Burundi, are trying hard to stick to their normal routines.

“There is no local lockdown in some places. So far, there are no issues with inputs either because we can still import cargo. However, export to Europe has been affected because flights have been cancelled and horticulture has taken a hit,” Ambele Mwakatobe, a farmer and journalist in Tanzania, said.

Agriculture is central to the community’s economy and contributes between 24 and 44 per cent of GDP in the partner states, while also accounting for the livelihood of about 80 per cent of the region’s population.