Gati, the strongest tropical cyclone ever measured Somalia, made landfall on November 22, 2020 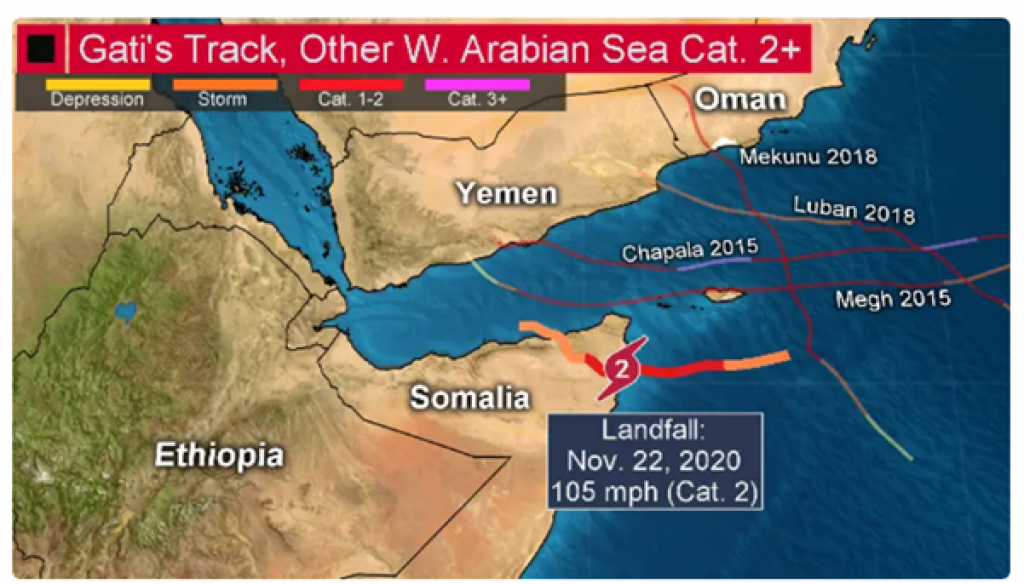 Widespread and heavy rains due to Cyclone Gati in Somalia have spurred a threat of a widespread locust outbreak in the east African country.

Gati, the strongest tropical cyclone ever recorded Somalia, made landfall on November 22, 2020, according to the National Oceanic and Atmospheric Administration (NOAA) Hurricane Weather Research and Forecast System.

Heavy rainfall due to the cyclone in the East African nation are likely to provide suitable conditions for breeding of locusts and aggravate the crisis, according to Food and Agriculture Organization (FAO) of the United Nations.

“From the second week of December, several waves of swarms can be expected to move south in Somalia and Ethiopia, reaching northern Kenya. Intensive aerial and ground control operations continue in both countries,” said FAO in its forecast November 20.

The locust outbreak of 2019 to early 2020 across several East African countries had posed a serious risk to food security and livelihoods. The three cyclones in 2018 and two in 2019 contributed to the 2020 locust upsurge in the Horn of Africa, including Ethiopia, Somalia and Kenya, according to the FAO.

Cyclonic storm Sagar was the strongest tropical cyclone to make landfall in Somalia in recorded history before Gati. It was the first named cyclone of the 2018 North Indian Ocean cyclone season.

Tropical Cyclone Pawan, which made landfall in Puntland State of Somalia on December 7, 2019, too, was devastating.

Cyclones are the originators of swarms, according to Keith Cressman, senior locust forecasting officer at the FAO.

According to him, there is a correlation between the intensification of cyclones in 2018 and 2019 and the locust outbreaks in 2020. He added the cyclones of 2018 and 2019 facilitated origin and breeding of locusts.

Extreme weather events led by climate change, increases in temperature and rainfall over desert areas, as well as strong winds associated with tropical cyclones provide a new environment for pest breeding, development and migration according to a study Climate change and locust outbreak in East Africa published in the journal Nature.

FAO has warned about the threat to southern Somalia from locust swarms in December 2020. Desert locust infestations are expected to continue to threaten crop production and pastureland across Ethiopia and Somalia through at least March 2021, according to GEOGLAM Crop Monitor.

But with Gati, Somalia along with Ethiopia and Kenya may be staring at another cycle of locusts outbreaks in 2021. In early to mid-2021, the acutely food insecure population is likely to rise to over 2.5 million in Somalia.

FAO has, therefore, called for scaled up desert locust surveillance and control operations as the Somali populations are already facing multiple threats to food security: desert locusts, socio-economic impacts of the novel coronavirus disease (COVID-19) and a developing drought condition.

According to the meteorologists, Gati strengthened rapidly because it was located in an area of warm water and low wind shear.

The tropical cyclone made landfall in Somalia with sustained winds of around 105 miles per hour. It is the first recorded instance of a hurricane-strength system hitting the country. At one point before the landfall, Gati’s winds were measured at 115 mph.

“Gati is the strongest tropical cyclone that has been recorded in this region of the globe; further south than any category three-equivalent cyclone in the North Indian Ocean,” stated Sam Lillo, a researcher with the NOAA Physical Sciences Laboratory.

Its intensification from about 40 mph to 115 mph was “the largest 12-hour increase on record for a tropical cyclone in the Indian Ocean,” Lillo added.

Ocean temperatures and wind shear, or the change in wind speed at different levels in the atmosphere, help determine whether a tropical system would develop, gain additional strength or fall apart.