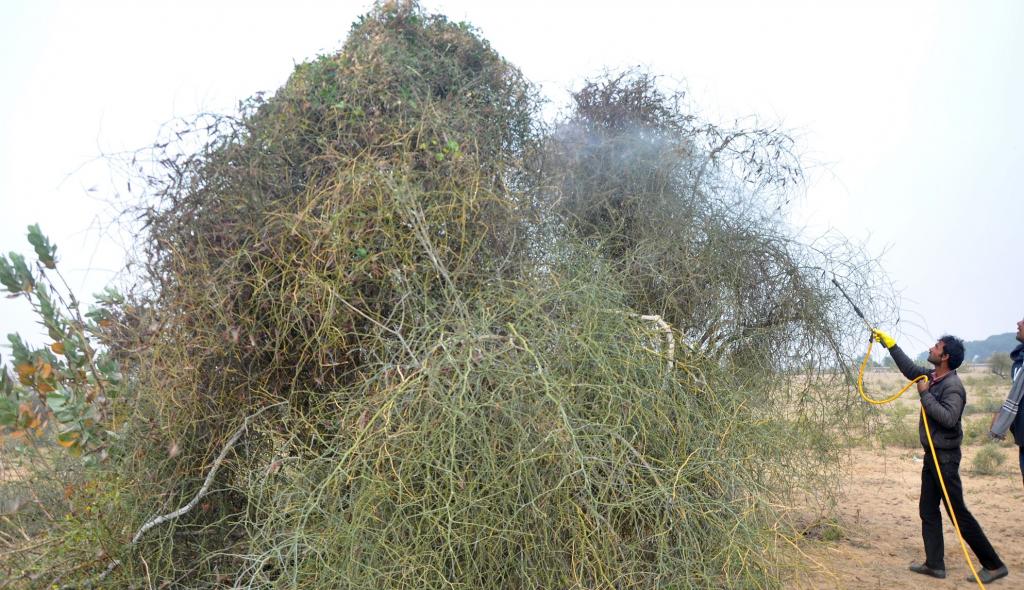 Change in cyclonic patterns over the Arabian Sea is behind the locust invasions in east Africa, west and south Asia, experts have said.

The plague of locusts that have been harrowing the three regions since last year, have now caused Pakistan and Somalia to declare ‘national emergencies’.

The country lost 40 per cent of its food crops by December 2019, according to media reports. Its immediate priority is to save its ripe cotton crops from the insects. The government claims to have sprayed pesticides on about 121,400 hectares, including aerial spraying over 20,000 hectares.

The locust attacks this time reached deep into areas where they had never been seen before like Dera Ismail Khan in Khyber Pakhtunkhwa province as well as the port of Karachi.

Experts say climate change has a big role to play in this.

The current attack of locust swarms is connected with the rise in frequency of cyclones in the otherwise-placid Arabian Sea.

In May 2018, Cyclone Mekunu turned parts of the arid Rub' al-Khali desert — that sprawls over Saudi Arabia, Oman, the United Arab Emirates, and Yemen — into a watery landscape.

Rainwater fell and gathered in different parts of the desert, such as Al Khareer, Thabltoun and Um al Malh, which are located in a triangle on the border between Saudi Arabia, Yemen and Oman.

The floodgates finally opened in January and February of 2019. During those two months, both coasts of the Red Sea — Eritrea, Djibouti and Somalia on the African side and Saudi Arabia and Yemen on the Asian, received good rains.

On the African side, the locusts bred in large numbers.  And when they did not find sufficient food, they flew with the help of favourable winds to the Arabian side, which already had witnessed locust growth due to the two cyclones. They reached in March 2019.

The swarms on the Arabian Peninsula then travelled to southern Iran on the other side of the Persian Gulf Through southern Iran. The swarm reached South Asia in April-May-June.

In June 2019, the Indian side of the Thar desert received unexpected rainfall, which again made conditions conducive for locusts to lay their eggs. Usually, the southwest monsoon hits western Rajasthan on July 1.

Barmer district in Rajasthan, part of the Thar, broke all records in June. It received a 14-day spell of rainfall. On June 24, it received 44.5 mm of rainfall in just two hours.

“It led to a lot of locust breeding in the Thar,” Shankar Lal, scientist at Krishi Vigyan Kendra Barmer, said. “Rainfall in July, though delayed, was also heavy. Locusts need moisture in sand to breed. They do breed in dry deserts too but the nymph (immature insect) fails to come out of the egg because of the heat,” he added.

The rain also led to the sprouting of desert vegetation like ‘Sewan’ (Lasiurussc indicus) and ‘Safed Dhaman’ or Cenchrusciliaris grass. This led to more breeding of locusts, that got a ready food supply.

Locusts usually leave India by November. In 2019, however, this did not happen as there were nine days of rainfall in November 2019.

“Generally, locusts return by November. But in 2019, they stayed till January 2020,” Suwa Lal Jat, joint director at the agriculture department of Rajasthan, said.

“Pests are changing their behavior and adapting to changing climate. Locusts that leave India at the onset of winter, are now spending winter here,” he added.

When the locusts go back to southern Iran to ‘rest’, they will be in for more conducive conditions. In the past few days, unusually heavy rains have fallen in the area.

Near the Chabahar port, more rain fell in a day-and-a-half than what normally falls during the entire year. Once floodwaters recede, the locusts will breed again and by May and June, they will be back in South Asia.

“One of the scenarios under climate change is an increase in the frequency of unusually heavy and short-lived rainstorms,” Keith Cressman, senior locust forecasting officer at the Food and Agriculture Organization told Down To Earth.

“If this is the case, then it could result in a greater frequency of favorable breeding conditions for outbreaks to develop,” he said.

This is the third of a multi-part series