A bright salt pan to a wet and lush landscape — the United States National Aeronautics and Space Administration (NASA) recently captured images depicting the wet and dry cycles of Etosha Pan in Africa’s Namibia through the year.

The Etosha pan is hollow in the ground, wherein water may collect or in which a deposit of salt remains after water has evaporated. The 120-kilometre-long dry lakebed and its surroundings are protected as Etosha National Park, Namibia’s second-largest wildlife park.

The pan is mostly dry, but after a heavy rain, it acquires a thin layer of water that is heavily salted by the mineral deposits on the surface.

According to NASA Earth Observatory, the salt pan receives most rainfall — as much as 46 centimetres — every year between October and March. During the dry season from April through September, water in the basin evaporates — depositing salt and other minerals on the land.

In December 2019, however, an unusually dry season left the Etosha Pan without water, and was captured by the NASA through Moderate Resolution Imaging Spectroradiometer (MODIS) sensor (shown below). 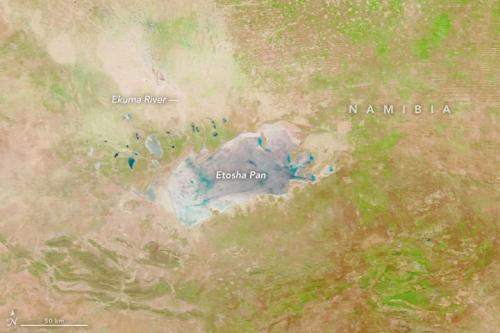 However, in January 2020, its landscape was transformed by a heavy spell of rain, as shown in the image below. The green regions depict living vegetation — sparse or thick. The darker shades of blue signify deeper water. 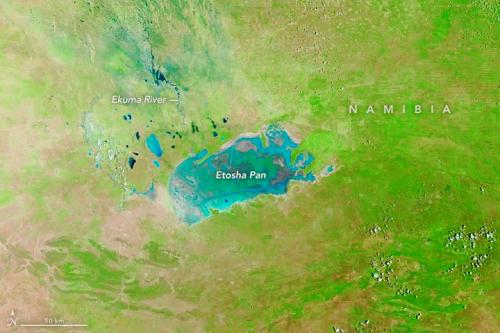 By August 31, 2020 (as shown in the image below), the salt pan had mostly dried again, aside from some water near the mouth of the Ekuma River. The red spots are burn scars from recent fires. The satellite imagery showed the scar closest to the Ekuma River burned for a few days beginning on July 13, 2020. 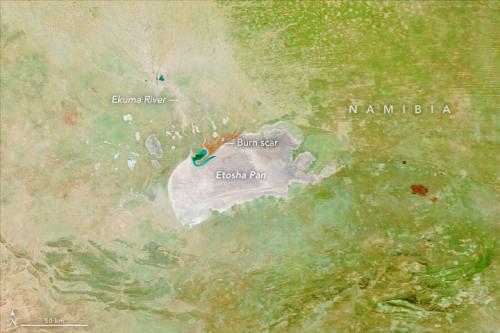 Earlier, Etosha National Park’s savannas (a mixed woodland-grassland ecosystem characterised by the trees being sufficiently widely spaced so that the canopy does not close) woodlands would burn about once per decade.

Fires would usually come after a wet spell produced a surge of vegetation growth, which would later be rendered dry and catch fire.

However, with evidence piling up that needed occasional fire to keep the ecosystem healthy, park managers started using it as a tool in 1981.  With time, as the system evolved, lightning-ignited blazes have been allowed to burn more frequently with prescribed burns that create a patchwork of natural fire breaks. These managed burns also prevent the build-up of excess fuel, lowering the severity of future wildfires.