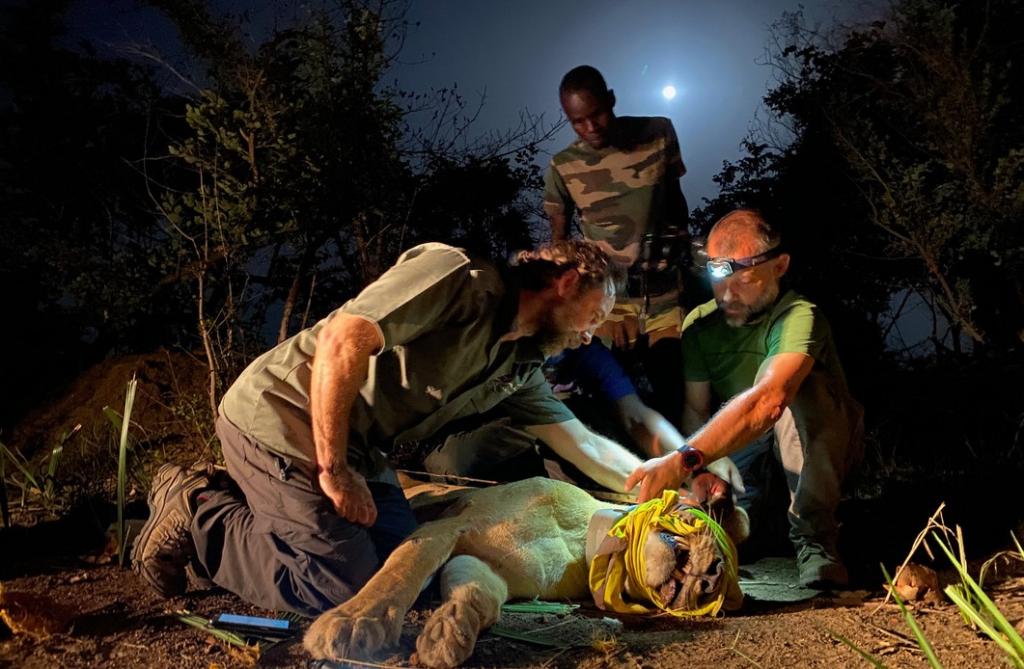 The GPS collars have been fitted to provide critical data about the species, which is down to just 250 in the wild, although NKNP’s lion population has doubled in the last decade.

A team made up of members from both sides worked nightly over three months in 2021 and 2022 to track, lure and successfully collar the six lions in the 9,000 sq km park.

The collared individuals also include a ‘coalition’ of three male lions. This, according to the statement, is a very encouraging sign since male lions form such groups only when numbers are high enough to warrant competition.

The team also collared a healthy lioness in her prime.

They also encountered a lioness who was too young to collar but was wounded due to porcupine quills stuck in her face that had prevented feeding for likely a month and would have resulted in her imminent death. The female was captured and the quills were removed.

The GPS has begun to reveal important information. For instance, it has shown that the lions frequent a particular region of the park. Anti-poaching measures can now be directed to this region.

It has also been revealed that lions in the park prefer large ungulates (hooved animals) as prey, which means these too need protection.

The statement added that stringent protection efforts had helped herbivore populations of Roan antelope and African buffalo rebound in the park, which signalled hope for the lions.

But the GPS has highlighted worrying aspects too. It has revealed a low dispersal drive, indicating that competition among male lions is stunted and suggesting that lion densities in the park are still far below their potential.

The West African or Senegalese lion is genetically distinct from the lions of southern and eastern Africa and part of the Northern lion subspecies. It has a thin mane and a lanky body, according to the Panthera statement

The lion is the official symbol of Senegal and the national football team mascot, along with being highlighted in the country’s anthem.

However, West African lions have suffered particularly dramatic population declines due to illegal hunting of the species’ prey, poaching for the illegal wildlife trade, direct killing over livestock depredation and loss of habitat.

Lions now inhabit just one per cent of their historic range in West Africa.

NKNP, a UNESCO World Heritage Site, is also home to one of the largest remaining leopard populations as well as the last surviving African Hunting Dog populations in west Africa. Other wild cats found in NKNP include the serval, caracal and African wild cat.

Philipp Henschel, an expert on the West African lion, who is also Panthera’s West and Central Africa regional director, was quoted as saying that NKNP had the potential to harbour hundreds of lions and become the ‘Serengeti of West Africa,’ benefitting both people and wildlife.

Meanwhile, the team plans to fit GPS collars onto another six lions in the current dry season.