Over 443 people died in the disaster 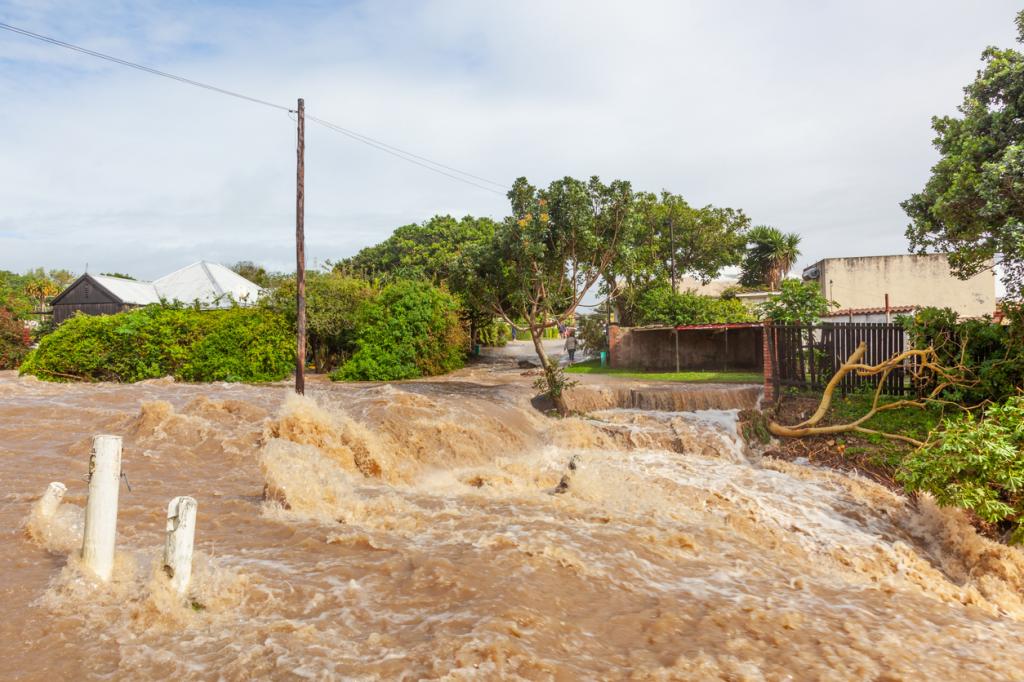 Criminal complaints have been filed by a group of climate change organisations against South Africa President Cyril Ramaphosa and a number of cabinet ministers for negligence in failing to take “practical action to address the climate crisis”.

The move came after a slow-moving weather system unleashed nearly 2-feet of rain across KwaZulu-Natal province for four days, resulting in devastating flash floods, mudslides and landslides, according to media reports.

The unprecedented weather event has resulted in the death of more than 443 people and 63 are still unaccounted for. Search operations are going on and sniffer dogs are being used to find bodies.

The Climate Justice Charter Movement (CJCM) wants the government to be found guilty of “culpable homicide” for its acts of omission to “prevent further emissions and to protect the vulnerable from increased inequality and poverty”. The organisation has filed documents in this regard with the South African Police Services.

South African law defines culpable homicide as the negligent unlawful killing of another human being.

CJCM, a coalition of several climate change activists and lobby groups from across the country, is arguing that the South African government is directly responsible for the deaths in KwaZulu-Natal.

Janet Solomon of Oceans Not Oil, Shaakira Davood of Youth Centre for Climate Change, Nora Seneka of The Active Citizens Movement and Desiree Laverne of Greenpeace filed the case at the Mayville police station April 14.

Janet Solomon from Oceans Not Oil said the South African government had been part of the Conference of the Parties to the United Nations Framework Convention on Climate Change and Intergovernmental Panel on Climate Change (IPCC) process since the early 1990s. But even after three decades, not much had happened to protect South Africa from the worsening climate crisis.

Hundreds of climate activists from across the country had gathered outside the Parliament on November 9, 2021 to demand the implementation of the Climate Justice Charter and protest against the excessive use of fossil fuels and the government’s support for coal-fired plants.

The Climate Justice Charter emerged out of six years of campaigning, during the worst drought in South Africa’s history by the South African Food Sovereignty Campaign and the Cooperative and Policy Alternative Centre.

Ramaphosa called the flooding 'a catastrophe’ after his visit to the flood-stricken parts of KwaZulu-Natal April 13, 2022 with the minister in the presidency Mondli Gungubele.

The flooding in KwaZulu-Natal was declared a provincial disaster and gazetted as such by Mmaphaka Tau, head of the National Disaster Centre.

The decision was taken “after assessing the magnitude and severity of the impact of the severe weather events occurring in various municipal areas of the province,” said Mmaphaka Tau.

A statement issued by the KwaZulu-Natal Provincial Government April 12, 2022 read:

Since April 11, 2022, the Province of KwaZulu-Natal experienced what is one of the worst weather storms in the history of our country. The heavy rainfall that has descended on our land over the past few days has wreaked untold havoc and unleashed massive damage to the lives and infrastructure.

The South African National Defence Force (SANDF) said April 18, 2022 that it had been instructed to activate 10,000 troops for flood-related tasks, including mop-up work and transporting aid.

KwaZulu-Natal premier Sihle Zikalala said nearly 4,000 homes were destroyed and more than 8,000 were damaged, most in the coastal city of Durban and its surrounding areas.

Billions of rand worth of damage has been caused to homes, places of work, roads, bridges, electricity and water supply as well as other critical government infrastructure. eThekwini municipality has been the epicentre of this disaster with most of the rain and the worst damage.

Another impact of the flood damage was on the United Phosphorus Limited (UPL) pollution control dam at the Cornubia site in Durban, eThekwini municipality. Apparently contaminated water from the dam has overflowed into the Ohlanga river.

Efforts were made to reduce the amount of rainwater entering the United Phosphorus Limited (UPL) pollution control dam and water samples have been taken to establish the level of pollutants that has entered the river, the eThekwini municipality said.

Weather experts have cautioned that such extreme weather events can become more frequent due to climate change.

AccuWeather international forecaster Jason Nicholls said the excessive rain amounts were a result of a storm system that crawled across the region.

This feature helped a storm develop near the southeastern coast of South Africa and which rapidly strengthened into subtropical depression Issa, enhancing rainfall around Durban and surrounding areas.

“Overnight rainfall reports from KwaZulu-Natal have underscored the particularly heavy and extreme nature of the rainfall, with some 24-hour falls exceeding 200 mm. More noteworthy is that a few stations even reported 300 mm or more,” according to the South African Weather Service (SAWS) in a press release April 12.

Globally, as a direct result of global warming and associated climate change, all forms of extreme weather events are becoming more frequent than in the recent past. Heavy rain events like the one which occurred in KwaZulu-Natal province are expected to recur in the future and with increasing frequency.