Thousands may face starvation from February to May in ‘hunger hotspots‘: UN agencies

Ethiopia, Nigeria, South Sudan and Yemen are on the highest alert

People living in parts of 20 countries will face acute food insecurity from February through May 2022, warned Food and Agriculture Organization (FAO) and World Food Programme (WFP). Urgent and targeted humanitarian action is needed in these places to avoid putting the lives and livelihoods of this population at risk, the United Nations agencies said in a new report.

Ethiopia, Nigeria, South Sudan and Yemen are on the highest alert, according to the research paper Hunger Hotspots.

A share of the population in these four countries were projected to experience starvation and death in the last assessment by the agencies for August to November 2021. The findings were published in Integrated Food Security Phase Classification [IPC] Phase 5 report. 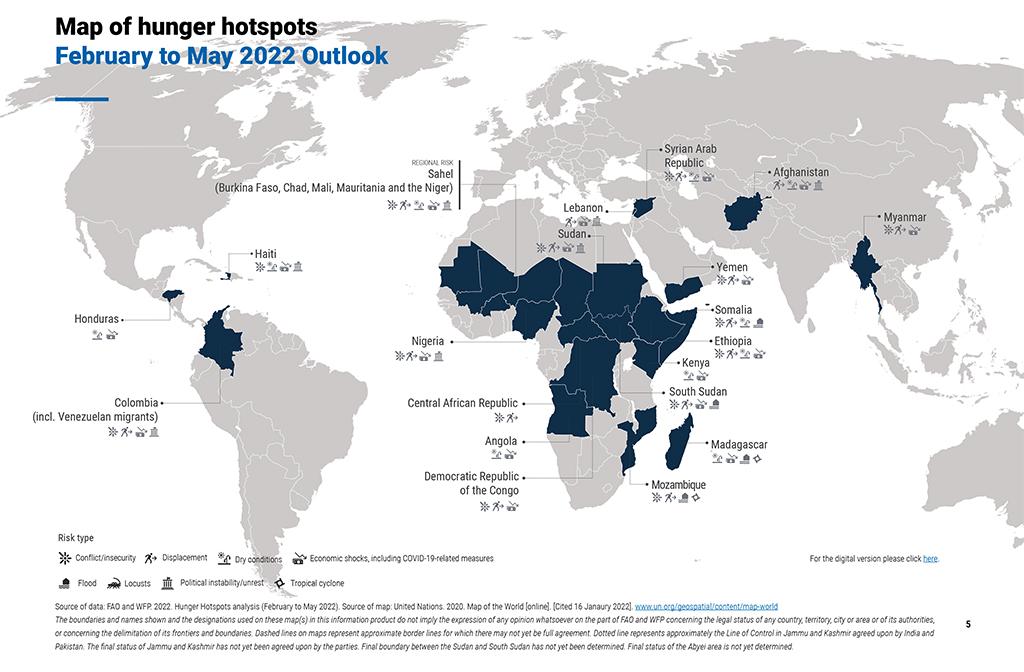 IPC defined famine as an extreme deprivation of food. This refers to a condition in which an area has at least 20 per cent households facing extreme lack of food, at least 30 per cent children suffering from acute malnutrition and two of every 10,000 people dying each day due to outright starvation or to the interaction of malnutrition and disease.

At least 13,550 people in conflict-affected northern Nigeria and in particular Borno state could face catastrophic food insecurity (IPC Phase 5) from June to August 2022 if adequate humanitarian and resilience-building assistance are not provided, warned FAO and WFP.

The number of people in this phase of food insecurity can be higher in Nigeria, as several out-of-reach locations in Borno state (Abadam, Guzamala and Marte) were not included in the analysis due to insufficient data.

In Afghanistan, a total of 8.7 million people by March 2022 is expected to slide into critical levels of acute food insecurity (IPC Phase 4). This is more than double the number from the same time last year.

A combination of factors such organised violence and conflict, economic shocks including impacts of COVID-19  pandemic, extreme weather events, animal and plant pests and diseases may be behind the acute food insecurity in these hotspots during the outlook period, the report said.

In Myanmar, Central African Republic, the Democratic Republic of the Congo, Central Sahel, Sudan, South Sudan, Somalia, the northern parts of Ethiopia, Nigeria and Mozambique, people were forced to abandon their land, homes and jobs due to conflict situations, according to the report.

Weather extremes such as heavy rains, tropical storms, hurricanes, flooding, drought and climate variability were important drivers in some countries and regions, the research paper showed.

The ongoing La Niña conditions led to an elevated risk of a two-year sequence of dry conditions, particularly in East Africa and Central Asia.

Impact of climate extremes on food security was seen in Haiti, Eastern Africa, Madagascar, Mozambique and in Afghanistan’s western region of Badghism, according to the paper.

World food prices have been rising since May 2020, the report showed. Near East, North Africa and Central and Eastern Asia are areas of greatest concern, it added.

Humanitarian access constraints and complex security environments would continue to pose a challenge to operations in Ethiopia, Mali, northern Nigeria, Niger, Syria, Central African Republic and Colombia, according to the researchers.