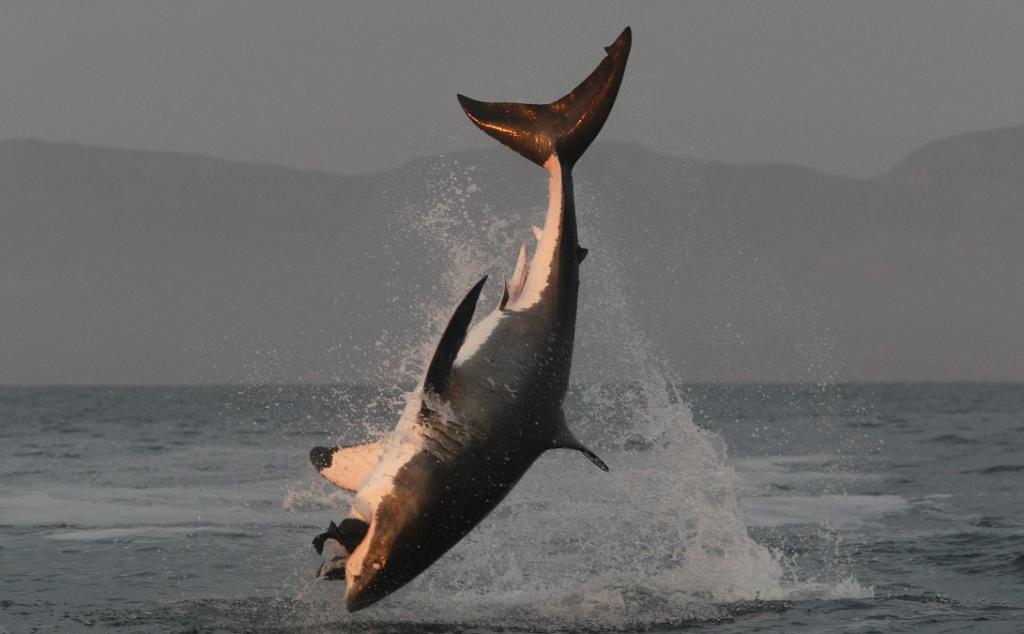 A Great White Shark 'breaches' in False Bay, South Africa. This was before Port and Starboard started preying on them. Photo: iStock

It was 2015. A strange phenomenon began to happen in the seas around Cape Town, South Africa. Dead great white sharks began to wash on the beaches near the city. A particularly gruesome aspect of the carcasses was that the livers had been torn out.

Over seven years later, it is now known whose handiwork it was. But what is not known is why, according to experts in a recent webinar.

The shark killers were two male orcas or killer whales euphemistically named ‘Port’ and ‘Starboard’ for the directions in which their dorsal fins flip.

The ecological and economic damage that they have inflicted is still affecting communities along the coast of the Western Cape province in South Africa — in the area from False Bay in the west to Plettenberg Bay in the east.

The webinar White sharks and orca in Plettenberg Bay was organised by Leadership for Conservation in Africa, a South Africa-based conservation non-profit. The main speaker was Justin Blake, a shark scientist and entrepreneur.

Port and Starboard were first seen in 2009 in Luderitz, Namibia. Their range extends from Luderitz to Port Elizabeth in South Africa and they have always been seen in shore, within shark hotspot areas. They have been predating on smaller shark species.

“We don’t know if they have been predating on larger shark species off shore,” Dave Hurwitz, an expert on cetacean behaviour in False Bay, said.

He added that he had always suspected the duo were part of a bigger clan. “That makes it very interesting but also very concerning going forward. Have Port and Starboard through cultural transmission taught other orcas how to hunt larger sharks or they have always been doing this?” Hurwitz wondered.

According to Allison Towner, senior white shark biologist, Port and Starboard came to South Africa as adults, with a specialist strategy in hunting sharks, which they obviously learnt from somewhere.

But why great whites? South Africa is not the first place where orcas have predated upon the iconic shark species, made famous by the 1975 Hollywood movie Jaws based on the Peter Benchley novel of the same name.

Great Whites have been predated upon by orcas in California and South Australia. “California was quite a long time ago in the 1990s. The orcas consumed the sharks’ liver but no carcass washed ashore since it was far out to sea,” Towner said.

In South Australia in 2019, a cage diving boat off the Neptune Islands was observing white sharks. A pod of orcas came and killed a shark in view of the boat. In both instances, the white sharks abandoned the sites in the following season.

“South Africa is not the first place where it has happened but it is the first place in the world where carcasses have washed ashore and have been subjected to necropsies,” Towner said.

Also, South Africa is the first place in the world where drone footage has been obtained in which the orcas pursue the sharks, who in turn, try to evade them, she added.

Blake said it was well-know that animals could learn and remember. “These animals may be coming here because they may remember that there is easy prey available. When the numbers have decreased, they move away following natural cycles we see all over the planet,” he said.

Great White sharks have largely abandoned areas such as False Bay (with Seal Island in the middle of it), the town of Gansbaai, Mossel Bay and Plettenberg Bay ever since Port and Starboard started their hunting spree in 2015.

This has dealt a huge blow to the shark cage diving industry in the area which provides livelihoods and sustains communities.

The white sharks were the star attraction in the years before 2015. Tourists and other visitors used to pay handsome sums to get into steel cages and dive to see the sharks in their natural domain.

Pods of orcas did visit the area prior to 2015. But they were never known to exclusively prey on the sharks.

The two years of the COVID-19 pandemic — 2020 and 2021 — had made things even more difficult for the shark cage diving operators.

“The effect of Port and Starboard on the shark cage diving industry has been devastating. But in this world of increasing uncertainty, you must be able to adapt,” Blake said.

Hurwitz sounded a positive note. “When the white sharks left Seal Island, the sevengill and copper sharks began moving in. It is not the same from the business perspective of the shark cage operators.

“But they have got other species they can show. People are really enjoying viewing copper sharks and learning about other species. They are also diving with blue sharks. Though the white sharks have left, there is still a lot of interest in False Bay’s sharks and people are supporting the companies,” he said.

All eyes will now be on a new paper on killer whales in South African waters which is to be released soon and would shed more light on the evolving relationship between orcas and great whites in the seas around South Africa.