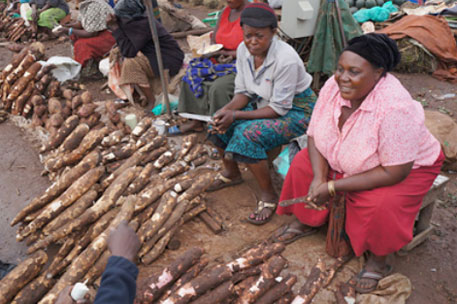 Cassava, a staple for millions of poor Africans, may vanish from their platter in the near future.

A leading US-based agriculture scientist has said despite being a climate-adaptive and drought-resistant crop, cassava yields are not keeping pace with the increase in African population.

This is indeed a worrying trend as, according to Clair Hershey, the programme leader at Colombia-based International Center for Tropical Agriculture (CIAT), more than half of the world's cassava is grown in sub-Saharan Africa where high-energy root crop is an important source of nutrition for the poor.

“More than 200 million people rely on cassava as a basic food crop,” he said during a recent lecture at the United Nations’ Food and Agriculture Organization (FAO).

It has been estimated that more than 30 per cent of the calories consumed by sub-Saharan Africans come from the crop, says research group Consultative Group for International Agricultural Research (CGIAR). Cassava can be boiled and eaten or used in soups and stews.

A native crop of South America, the Portuguese traders introduced cassava to sub-Saharan Africa in the 17th century.

While cassava has witnessed high yields in Asia, the same cannot be said of Africa, say media news reports.

Farms in Asia, particularly Thailand, where cassava is produced for animal feed or industrial uses, yield 21 tonnes per hectare compared with less than 13 in Africa, Hershey was quoted as saying in a news article in Reuters.

This is not good news as Africa's population is projected to rise to between 3.5 billion and 5.1 billion by 2100 from about 1 billion now, the United Nations and other population experts had said in September.

Decrease in yields is a source of anxiety as the poor may face difficulty in getting adequate nutrition.

So, what is the reason for the decline in yields?

Poor planning and a lack of investment in research partly explain why yields have not risen in Africa as much as Asia, Hershey said.

The crop is naturally "climate smart" he added and can even grow on poor quality soil.

Cassava is the crop with the highest total production in Africa. With 118 million tonnes of production across the continent in 2010, it contributed to a significant energy input to the population with an average 196 kcal/capita/day in 2008, according to a study report published in Tropical Plant Biology.

It remains to be seen whether scientists and agriculture experts find a solution to the problem and save the crop.

Hidden hunger in South Africa: the faces of hunger and malnutrition in a food-secure nation

The role of cassava in improving rural food security and Income among Farmers in Abia State, Nigeria