Mercury can affect even adolescent brains 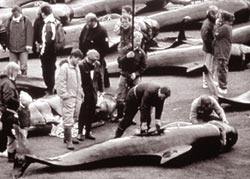 eating seafood with high levels of mercury can affect the brain development of older children, indicates a study published in the online edition of the journal Nature. The finding intensifies the ongoing debate about the health effects of methylmercury -- mercury found in large marine animals such as whales. Some researchers advocate that methylmercury is toxic only to foetuses and infants, and older children are unlikely to have developmental problems due to the poison. But the study conducted on Faroe Islands (in North Atlantic), where inhabitants eat lots of seafood and whale meat, paints a completely different picture.

During the study, researchers from the us-based Harvard School of Public Health found that children aged seven had a slower transmission of electrical signals along a particular circuit in their brain than was normal. When the children became 14-year-old, the disruption became even worse. The findings suggest that safety messages about mercury should also highlight the toxin's potential impact on children of all age groups.