The flood prevention measures by the state of inferior quality 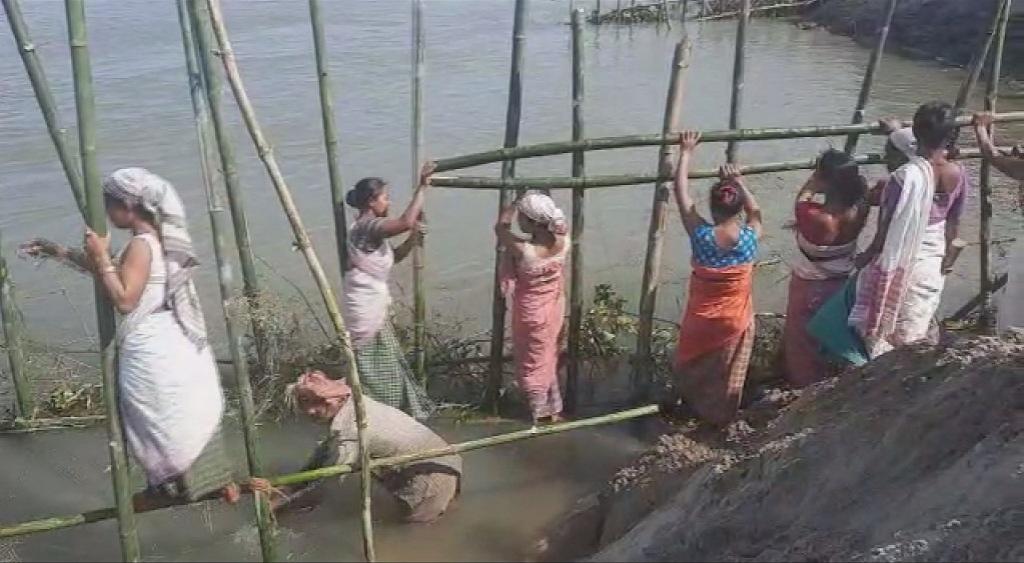 Soil erosion, coupled with changing climatic conditions, have been writing a cruel destiny for the inhabitants of Majuli in Assam, the largest river island in the world. River Brahmaputra has devoured half of the island over the last six decades, severely affecting the agriculture and livelihood of the inhabitants.

But these measures are inadequate — the geo-bags need to be replaced every monsoon and the porcupine structures constructed last year were of poor quality and got damaged — the villagers pointed out.

They repeatedly requested the administration to replace these structures but to no avail, she said.

The “lack of seriousness” of the administration has been pushing them closer to the river every passing day, said Moni Pegu, 35, a resident of Major Sapori village in Majuli.

Pegu and some other women of the village took it upon themselves to save their lives and livelihood. They came together to erect bamboo structures on the bank of the river to reduce erosion.

“We have been helplessly watching our houses and land get eaten away by the river. The mud embankments dissolve within a few months,” Pegu added.

They procured the bamboo from the forest and shaped it a little before lining them up along the bank of the river, said Dola Pegu, 40, from the same village of around 1,800 people. She added:

We do not know how long the temporary arrangement might work but we have no alternative left with us. The farming land is already getting washed away by the river. We would lose our livestock and houses if no timely action is taken.

As many as 31, 240 people in the village depend on agriculture for their livelihood and 9,270 hectares of land is cultivated on the island, said Irshad Ali, the sub-divisional agricultural officer for Majuli.

The villagers mostly cultivate flood-resilient paddy as vegetables get inundated by floodwater that stands for four-five months. “Our children mostly survive on paddy and lentils. We are unable to feed nutritious food to children,” said Anjali Das, 38.

Around 18 per cent of the cultivable land was affected by flooding in 2017 and 1,875 hectares of cropland damaged in floods in 2019.

“We are providing farmers with flood-resilient seeds of various crops like paddy and mustard to deal with the harmful impact of climate change. It is the only way for survival.”

Villagers, however, feel the government should come up with a stronger solution to deal with soil erosion, otherwise “the entire village will be history like other places in Majuli. “We have been facing the problem for the past several years. We have lost everything to the river,” rued Palash Pegu, 31, a farmer.

The state government dismissed allegations of shoddy work and claimed it has been doing enough to minimise soil erosion.

The area has a 96-kilometre earthen embankment, said AK Deka, executive engineer of Brahmaputra Board that was formed to deal with flood and soil erosion. The body has been placing geo-bags to prevent erosion and RCC porcupines to reduce velocity of water, he shared. “It is very difficult to place stones on the embankments because of restrictions by the government to transport them from other states.”

The department will look into the complaints by the people and take suitable action, he assured, adding that he has no data on the total land that the island loses to erosion every year.

A section of villagers questioned the logic of placing geo bags when they are constantly getting washed away in the river. “It is simply a waste of public money.”

They urged the government to relocate them to safer areas or give them money to buy land instead of merely making a show of their vain efforts.