42% of India’s districts use 85% of its chemical fertilisers 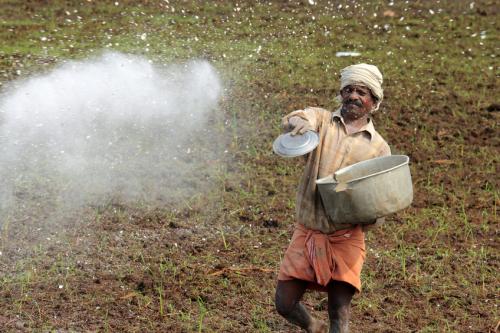 The parliamentary standing committee on agriculture has recommended formation of a “Pesticide Development Authority” to ensure balanced use of chemical fertilisers in the wake of declining agricultural productivity.

The 29th report, called “Impact of chemical fertilizers and Pesticides on agriculture and allied sectors in the country”, was tabled in Parliament by the committee. The 31-member-committee was constituted in 2014-15 and is headed by Bhartiya Janata Party MP Hukum Deo Narayan Yadav.

Quoting data from the beginning of the green revolution, the committee observed that decadal growth rate of agriculture has significantly decreased, from 8.37 per cent in 1960-70 to 2.61 per cent during 2000-2010.

The current growth rate will be unable to feed the country’s population by 2025. The country needs to produce 300 million metric tonnes (mmt) of grains against its current output of 253 mmt.

In its report, the committee pointed out the unequal use of fertilizers and pesticides in different regions and blamed it for decreasing soil fertility. Lack of awareness among farmers was cited as the reason for this imbalance.

According to the report, about 292 districts account for consumption of 85 per cent of all of the country’s fertilisers. Besides, there are discrepancies in the use of fertilisers on the basis of chemical ratios. The current comsumption ratio of nitrogen, phosphorus and potassium (NPK) is 6.7:2.4:1 against their desirable ratio of 4:2:1.

The situation is grimmer in major agricultural states like Punjab and Haryana where NPK use ratios are as high as 31.4:8.0:1 and 27.7: 6.1:1 respectively.

The crop-wise usage pattern of fertilisers is highly uneven. They are used most in potato, sugarcane, cotton, wheat and paddy. Fertiliser use in some crops is more than double the requirement.

The report blamed the Union Ministry of Agriculture's skewed subsidy policy for the problem.

It said, “The Secretary of Department of Agriculture, Cooperation and Farmers Welfare, skewed subsidy policy in favour of urea and high prices of other fertilisers are the real culprit behind the imbalanced use of fertilisers in the country.”

The committee also recommended revision of the existing fertiliser subsidy policy and promotion of organic fertilisers. It also asked to provide incentives for the use of bio-fertilisers.

The committee found that India does not have provisions for periodic scientific evaluation of pesticides that are being used. The Central Insecticide Board (CIB) does not conduct any research or study, but advises the government based on national and international information available. To overcome this, the committee recommended a separate authority.