Burkina Faso's farmers have thrown out Monsanto's Bt cotton and returned to conventional seeds, with a little help from India. 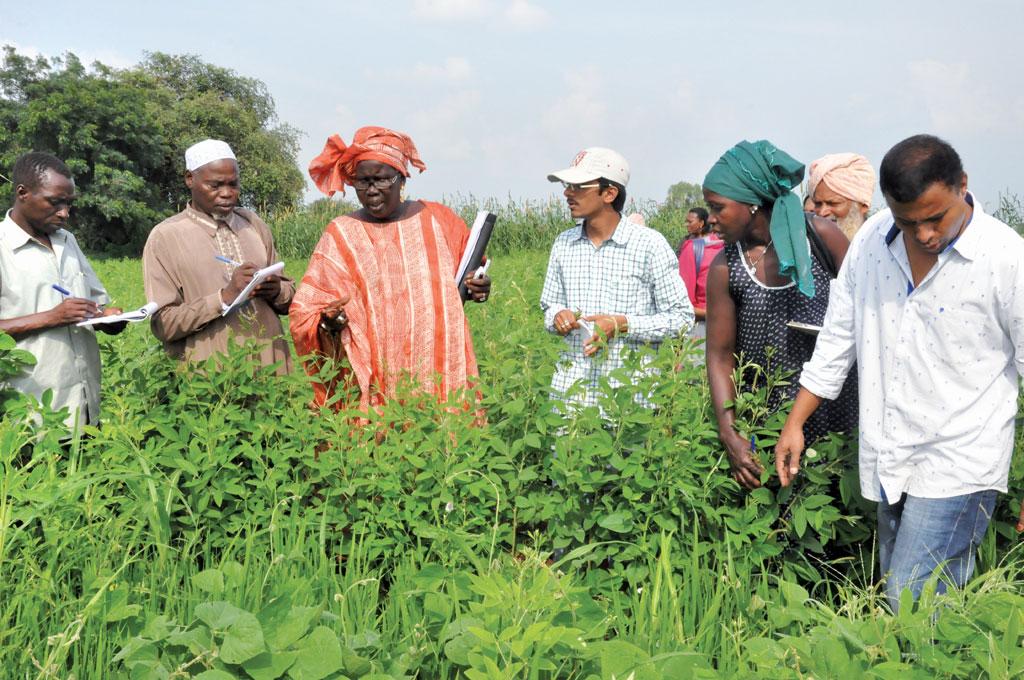 Farmers turned researchers of Burkina Faso learn tips on sustainable agricultural practices from cotton farmers of Warangal in Telangana during their visit to India a few years ago (Photo: Deccan Development Society )

Some revolutions are as important for the way their seeds took root as for the transformation they usher in. Protests and campaigns against genetically modified (GM) crops are routine across the globe but none has resulted in the dramatic denouement witnessed in Burkina Faso, a small impoverished country in West Africa. In this top cotton exporting country, GM or Bt cotton, peddled by agri biotech giant Monsanto under the Bollgard II trademark, has been rolled back completely. And Monsanto itself is, reportedly, exiting Burkina Faso after paying compensation to the cotton companies for the decline in revenues and more significantly for damage to the reputation of Burkina cotton.

Those familiar with Monsanto operations worldwide, especially in India where farmers have suffered debilitating losses and destruction of livelihoods, would find this is unprecedented. Monsanto has never acknowledged that its insect-resistant Bt cotton has ever failed although damage to their crop has compelled huge numbers of farmers to take their own lives.

And yet, it is to India that Burkina Faso farmers owe a debt for getting their act together to tackle the biotech giant. From across continents has come their learning of how to collect data and use it effectively to demand more sustainable agriculture practices. As Bt cotton began to rapidly envelop the cotton-growing areas of Burkina Faso (see ‘Rise and fall of...’,), farmers, initially happy with Monsanto’s Bollgard II, found their problems increasing. The Indian experience showed them they needed to act quickly.

Cotton is vital to Burkina Faso’s economy. The cash crop accounts for slightly over 4 per cent of the GDP, two-thirds of export earnings and employs, directly or indirectly, about a quarter of the country’s workforce. Perhaps it was natural that not many questions were raised in 2003 when it was discovered that Monsanto had begun field trials of Bt cotton without the due process. Pests had been ravaging the cotton crop and the authorities had allowed the company to conduct trials, although there was no regulatory framework in place for GM crops. It is believed that Burkina Faso’s autocratic and long-time President, Blaise Compaore, had been arm-twisted by the US to allow Monsanto to make its entry into West Africa. Compaore had even issued a presidential decree authorising Monsanto to conduct the trials.

While scientists concede that Burkina’s authorities are as much to blame as the biotech giant for the Bt fiasco, they claim that Monsanto short-changed farmers by introducing a cotton variety that had not been properly backcrossed. A recent online study published by Dutch researchers quotes a state scientist as saying that Monsanto made just one backcross of “an American variety containing the Bt gene with a local Burkinabe variety”. The researchers quoted Didier Zongo from the National Agency for the Evaluation of Research Results (ANVARR) as saying huge mistakes were made.

According to Zongo, “All researchers know that retro-crosses should be made... normally up to seven backcrosses have to be made to fix both insect resistance and all the characteristics of our local variety. In fact, the variety marketed in Burkina Faso was the result of two backcrosses.” As a result, crops began to deteriorate rapidly and the cotton—recognised as the best in the world due to its exceptionally long fibre—lost its quality label.

It is against this backdrop that farmers turned researchers and fanned out into the cotton-growing provinces armed with no-tebook and pen to collect data. The inspiration for this initiative came from thousands of miles away, from the scarred and tragedy-strewn fields of Telangana where Bt cotton had overwhelmed cotton cultiva tion some six years earlier. Burkina Faso is a country as distant and unknown as it can be in India, but some farmers in Telangana can claim to have made a small, but crucial contribution to the anti-GM revolution in Burkina Faso.

Particularly happy is P V Satheesh, director of Deccan Development Society (DDS), which has provided valuable learning on Bt cotton to farmers and activists from West Africa. “That Burkina Faso has picked up the lead from our NGO is truly gratifying. It’s a matter of pride that we were able to show a new way of researching agrarian problems—that we don’t always need scientists to give us the data. Farmer-led research is as important because they have vast reservoirs of knowledge.” 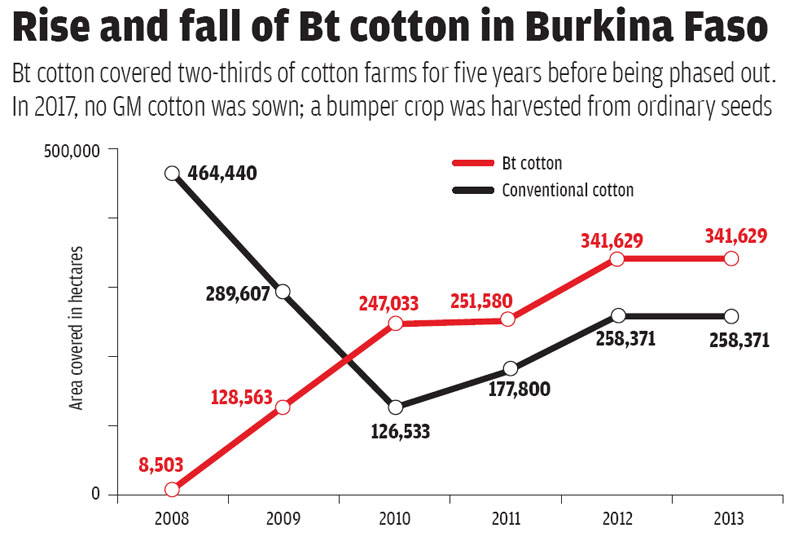 The Africans were majorly influenced by a 2007 film made by DDS on the devastation wreaked by Bt cotton in large swathes across the world. Called 'A Disaster in Search of Success: Bt cotton a 3-year Fraud', the documentary “left a deep impression” on the farmers and activists from West Africa who came to India in 2012, says Eric Chaurette, programme director of Inter Pares, an Ottawa-based organisation that brought the two sides together.

Inter Pares coordinated a series of learning exchanges between DDS and COPAGEN (Coalition for the Protection of African Genetic Heritage), an organisation that brings together farmers and environmental activists from nine West African nations. Four exchanges have taken place since 2012, when Bernadette Ouattara, a Burkinabe agronomist, led the first team to Medak. This visit inspired COPAGEN to replicate the DDS farmer-research methodology in Burkina Faso, with 500 farmers in the first year, and then with a smaller group of 203 to ensure better data collection and analysis.

In a second exchange, three Burkinabe farmer-researchers travelled to those places where Bt cotton was cultivated, mostly in Nalgonda district, and met the widows of farmers who had committed suicide. Among the visitors was Oumarou Ouedraogo from Koumana province of Burkina Faso. In a telling interview, he asked: “Are we making progress or going backwards (with Bt cotton)?” At a session with other farm researchers in Boucle du Mouhoun, an administrative region in Burkina Faso, he said he had lost 600 kg of produce in just three years. In the first year, the yield from his three hectares was high since the insect resistance was working, but in the next two years, it dropped by 300 kg each year—from a yield of 3,692 kg to just 3,114 kg.

With data collected from small-scale farmers, COPAGEN put together its own film Bt Cotton and Us: Truth from our fields. The findings were damning, says Kadidja Koné of Cote d’Ivoire who led the recent COPAGEN visit to Pastapur in Medak district where Down To Earth spoke to her. Not only were Bt cotton seeds 30 times more costlier than conventional seeds, the declining resistance to insect attacks was forcing farmers to use more and more sprays. Ultimately, the initial savings on pesticide use were wiped out. Besides, Bt cotton cost 7 per cent more than conven tional cotton to grow but yielded 7 per cent less. The film helped ignite a number of popular protests across the country that demanded Monsanto quit Burkina Faso.

While DDS is thrilled to hear of how COPAGEN’s farmer-led research study contributed to the complete phasing out of Bt cotton in Burkina Faso in 2017, Satheesh wonders why “despite hundreds of thousands of suicides across India since Bt cotton was introduced, suicides which have been directly attributed to the terrible debts farmers incur through expensive Bt cotton cultivation, it is still cultivated in India”.

It would seem that in the final analysis India has more to learn from Burkina Faso than the other way round. For instance, how did this small nation of 18.6 million, of whom 80 per cent is engaged in subsistence farming, find the courage to take on Monsanto? One analyst believes “it is more a matter of the market rejecting a product of inferior quality than of massive resistance”.

What followed, however, is something India needs to take note of. When its economic interests were hurt by the slump in cotton export earnings, the three cotton companies and the national farmers’ union which together form the Inter-professional Cotton Association of Burkina (AICB) took a tough stand. Last year, they demanded 48 billion CFA francs (US $76 million) in compensation from Monsanto for the decline in profits. Rather prudently, AICB had withheld royalties or trait fees amounting to 15 billion CFA francs owed to Monsanto for the previous two years.

In the agreement that’s been worked out, Burkina Faso will retain 75 per cent of the fees and release the remainder to the US giant. “In doing this, we think that a bad deal is better than a bad court case. We have closed the Monsanto dossier,” a spokes-person for SOFITEX, the biggest cotton company which is majorly state-owned, told Reuters news agency.

Monsanto has not responded to questions on these issues sent by Down To Earth.

The other good news emerging from Burkina Faso is that its switch to conventional seeds has paid off handsomely, so far. It is all set for a record harvest of 820,000 tonnes this season, up from 683,000 tonnes in the 2016-17. Farmers and activists are hoping that many of the things that had gone wrong since 2003, when the US multi-national began field trials in stealth, will be set right now. Those familiar with its politics say the ouster of Compaore has fostered an open debate on GM foods and allowed farmers fighting for food sovereignty to hold public protests. Compaore was turfed out of the country by another popular movement called Le Balai Citoyen or Citizen’s Broom after the autocratic president tried to extend his 27-year rule through a constitutional amendment. That is clearly another lesson the Indians need to remember.

Although SOFITEX insists that the return to conventional cotton is just a “temporary withdrawal from GM”, the exit of Monsanto from Burkina Faso is unlikely to has-ten its return. Besides, it is having a ripple effect. In May this year, Ghana suspended GM cotton trials, citing lack of funds. Other countries too are likely to be cautious after the Burkina debacle. With the uncertainties surrounding the acquisition of Monsanto by the German behemoth, Bayer, the immediate prospects for GM in Africa appear less than promising.

“Burkina Faso was the Trojan horse to bring GM crops into West Africa,” says Chaurette who thinks the failure of Bt cotton is extremely significant. The fact that the technology failed, he says, is damning. “One of the unintended consequences of GM is that it caused the plant stress and led to shorter fibres that destroyed the premium Burkina cotton commanded. It is the failure of a supposed "precise technology" that I find interesting.”

The story was originally published in June 16-30, 2017 issue of Down To Earth