All that ails pulses in India

The past three decades have seen stagnation in acreage, production and productivity of pulses across the country due to a bevy of reasons that include availability of more profitable crops 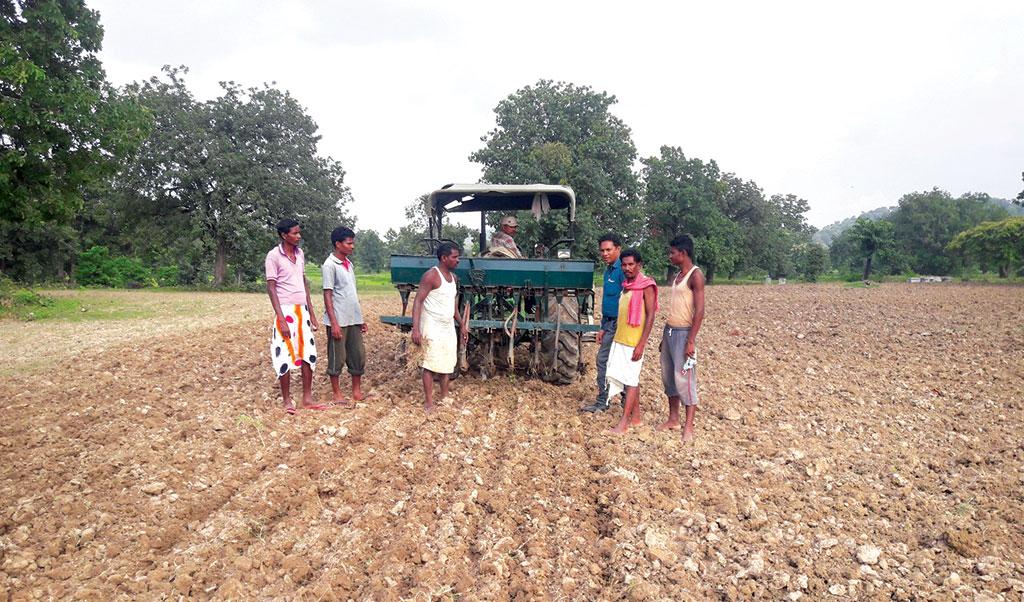 Land under kharif pulses was growing at 8 per cent in 1980 but by 1990 the trend turned negative, with the acreage declining at -8 per cent (Photograph: Rajkumar Verma)

The primary reason behind India’s domestic shortage in pulses is stagnation of production over the past five decades. Overcoming the Pulses Crisis, a 2010 report by the Confederation of Indian Industry, states the production of pulses grew only by 45 per cent from 1951 to 2008, while wheat production grew by 320 per cent and rice by 230 per cent.

Though production of pulses has risen in the past decade — by 65 per cent between 2009-10 and 2020-21, as per the Third Advance Estimate given by the Union Ministry of Agriculture and Farmers’ Welfare on May 25, 2021—over-all growth is not enough to meet domestic demand, which has been met by imports since 1981.

The production of kharif pulses (tur, urad and moong), which account for about 40 per cent of India’s total pulses, has been worse than that of rabi pulses (chana and masoor). These are the five main pulses produced in the country and covered by minimum support price.

According to a NITI Aayog report titled Demand and Supply Projections Towards 2033, released on July 30, 2021, production of kharif pulses was rising by 8.7 per cent in 1980 but fell to -6.6 per cent by 1990. Production of rabi pulses, too, was increasing at 5.5 per cent and fell to -3.2 per cent in 1990, but it then made a recovery in the next decade and grew at 4.2 per cent after 2000 due to programmes such as the Integrated Scheme of Oilseed, Pulses, Oil Palm and Maize and the National Food Security Mission. 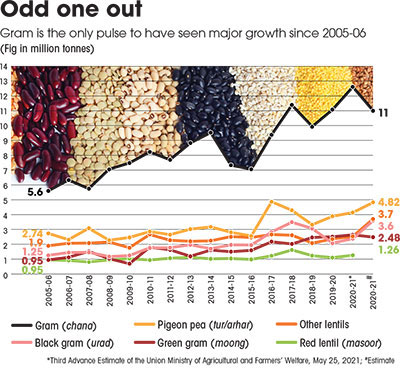 It is important to draw the distinction between rabi and kharif pulses for two reasons. One, chana is the main rabi pulse, whose production has increased from 5.6 per cent in 2005-06 to 11 per cent in 2020-21, and is the reason behind the overall rise in production of pulses.

Two, the production of tur, a kharif crop, considered the country’s primary pulse because of its consumption in meals as dal everyday in most northern states, has only grown from 2.7 per cent to 4.8 per cent in the same period.

There are no official estimates, but experts say that tur’s consumption in meals as dal is much more that of chana, whose rise is on account of its use in packaged foods.

The stagnation of kharif pulses is also borne by acreage. The NITI Aayog report says that land under kharif pulses was increasing at an 8 per cent rate in 1980, but by 1990, it was declining by -8 per cent.

Tur’s acreage has only risen from 19 million hectares (ha) in 1950-51 to 29 million ha in 2019-20. What is the reason behind this stagnation of pulses in general and tur in particular?

Pulses in India: Retrospect and Prospects, a report published by the Union Ministry Of Agriculture & Farmers Welfare in 2017, says farmers in the Gangetic plains quit pulses for other crops around 1990. This happened because of the improvement in irrigation facilities, IP Singh, principal scientist at the Indian Institute of Pulses Research (IIPR), Kanpur, tells Down To Earth.

Pulses can grow in arid climates, and so they were the crop of preference before irrigation facilities improved in northern states.

“When the water of Kanpur Lower Ganganahar reached our village 25 years ago, people gradually started cultivating paddy. I also cultivate paddy now, and then potato and wheat, in order of preference,” says 65-year-old farmer Kamlesh Yadav of Biharipur village in Uttar Pradesh’s Etawah district. “Tur cultivation stopped in our village a decade ago. Neither the seeds, nor the yield and the price were good,” he adds.

Even the drought-prone Bundelkhand region of Uttar Pradesh, known for cultivation of pulses, has seen farmers shift to the more water-intensive wheat. Bacchi Prasad, a farmer of Bashari village in Banda district, says that two decades ago he used to cultivate pulses every year but now prefers wheat and oilseeds. He also says that earlier he never had to buy pulses, but this year has bought 70 kg of tur.

The family’s pulses consumption has also reduced after it stopped cultivating pulses. Earlier, dal was prepared every other day but now it is served once or twice a week. Prasad also says that stray cattle are in large numbers in the area and prefer pulses to other crops. Singh, too, says that damage to pulses by nilgais and other stray animals is a big factor in Uttar Pradesh for farmers moving to other crops.

While tur went down in the North, its production, along with that of chana, witnessed a rise in central and South India, says Singh, who is also the acting project coordinator (pigeon pea) at IIPR.

As per A Amarender Reddy, principal scientist at Central Research Institute for Dryland Agriculture, Hyderabad, while the acreage of chana in northern and eastern states decreased from 4.2 million ha to 0.8 million ha between 1960 and mid-2000, it increased in central and southern states from 2.2 million ha to 5.1 million ha in the same period.

Today, more than 90 per cent of pulses are produced in the 10 states of Madhya Pradesh, Maharashtra, Uttar Pradesh, Gujarat, Jharkhand, Rajasthan, Andhra Pradesh, Telangana, Chhattisgarh and Karnataka, as per the ministry’s 2017 report. In the past six years, sowing for the kharif season has remained below normal in the six major pulses-producing states of Madhya Pradesh, Maharashtra, Karnataka, Andhra Pradesh, Rajasthan and Uttar Pradesh, shows latest data released by the Union agriculture ministry on July 16, 2021. 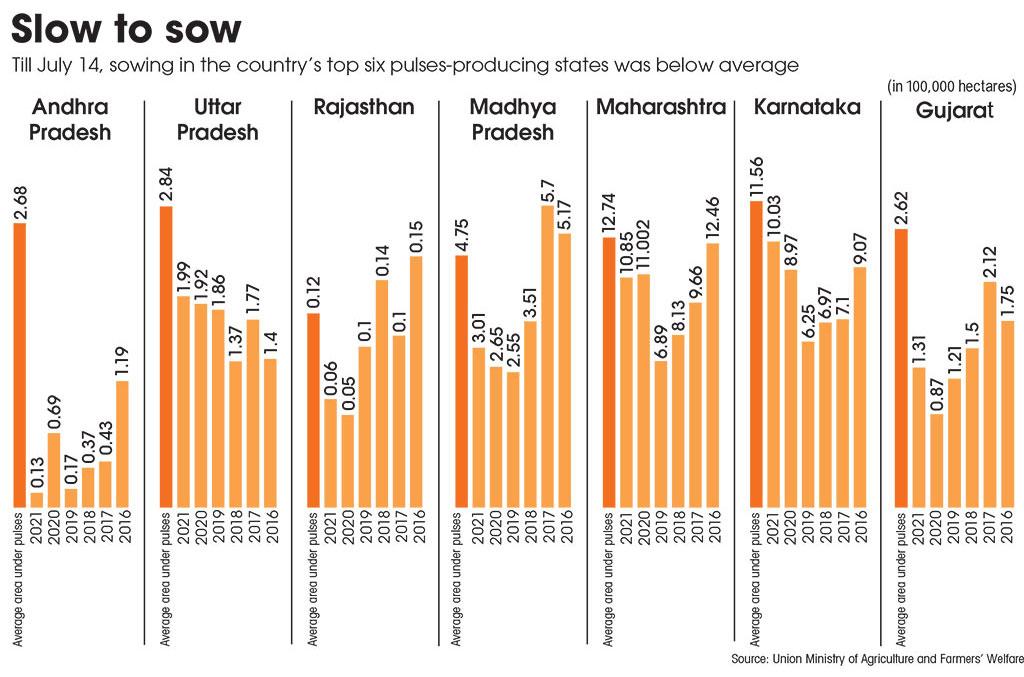 The rise of soyabean

Soyabean’s entry in India was in the 1960s, when the country was facing a food crisis. GB Pant University of Agriculture, Pantnagar, Uttarakhand (then in Uttar Pradesh); Jawaharlal Nehru Agricultural University, Jabalpur, Madhya Pradesh; and University of Illinois, US, jointly started an effort in the mid 1960s to overcome the protein deficiency in India by increasing the yield of soya bean.

The initial trials took place in 1965-66 with a South American soybean variety that ripens in 110-130 days and has a yield of 3-4 tonnes per ha. The Indian Council of Agricultural Research has promoted the crop since 1967 and in the past three decades, the government has encouraged inter-cropping of tur with soya bean. According to Agropedia, a web portal developed by IIT-Kanpur, the ratio of tur to soyabean should be 2:1.

This ratio is now reversed in many states. Gyaneshwar Dekale of Maharashtra’s Washim district, who runs a farmers producer organisation with 500 member farmers, tells DTE that the ratio of soybean to tur in his village is inverted. Farmers prefer soya bean to tur because it is ready in just 110 days and the yield is 1,700-2,000 kg per ha whereas tur matures in 152 to 183 days and the yield is 750 kg per ha. Soyabean’s’ shorter crop cycle leaves enough time for farmers to cultivate another crop in the season. 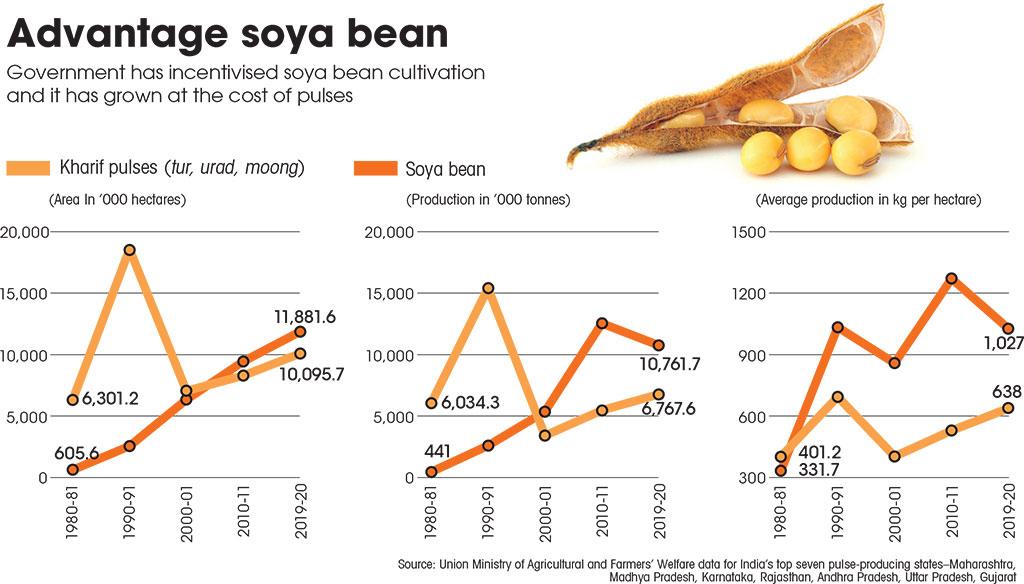 Soyabean de-oiled cakes have a huge demand in the poultry industry as feed. “The attractiveness of soya bean for farmers has increased due to better price and instant cash,” says Dekale, highlighting that in the last 15 years, the cropping pattern has changed a lot.

“In Maharashtra, soyabean has even replaced moong and urad grown in zayed season (the period between rabi and kharif). We have not expanded tur cultivation for decades,” he says.

In Rajasthan, the availability of water from the Indira Gandhi Canal destroyed the millet crop in Sri Ganganagar, says C Bharadwaj, principal scientist at the Indian Agricultural Research Institute, New Delhi. Availability of water changes the crop cycle. In such a situation, farmers who arrange water in dry areas can gradually reduce the intercropping of tur due to lack of good price and better quality seeds in soya bean fields.

“Profit from tur is difficult, but international market price of soya bean is good,” says Praveen Parmar, a farmer of Sehore district in Madhya Pradesh. The result is that soya bean as a commercial crop has expanded in these traditionally pulse-producing states. “If farmers do not get due remuneration, why would they produce such a crop?” asks Bharadwaj.

This was first published in Down To Earth’s print edition (dated 1-15 September, 2021)