Ensuring food security, producing more with less resources and building the resilience of smallholder farmers are important towards creating a food-secure future

As climate is changing, creating resilient food systems has become the need of the hour. Across the world, agriculture is facing multiple setbacks, be it in the form of extreme weather events like floods and droughts or factors such as soil degradation, soil salinity and water shortage.

To feed the global population of 9.6 billion by 2050, as projected by a United Nations report, scaling up food production is important. But ensuring food security, producing more with less resources and building the resilience of smallholder farmers are also important in creating a food-secure future.

Natural all the way

Districts like Anantapur, Prakasam, Kadapa, Kurnool and Chittoor have traditionally been drought-prone. The only advantage Kurnool has is the occurrence of black cotton soils over a greater portion of the district that can retain moisture for a longer period of time. However, the western part of the district has dry, red soil. There are villages in Kurnool which witness dry spells for over a month. For such villages, ZBNF has come as the right solution.

ZBNF was initially launched in September 2015 under the Centre’s Rashtriya Krishi Vikas Yojana. Initially, 50 villages across 13 districts of the state were selected for the pilot project. It has been so successful that the government wants to scale it up, according to T Vijay Kumar, who is in charge of the project. Last year during the Kharif season, work started in 704 villages to bring farmers under this practice. There is a plan to cover an estimated 6 million farmers by 2025-26.

The main aim of ZBNF is elimination of chemical pesticides and promotion of good agronomic practices. Many farmers, who were initially reluctant to take up ZBNF, have been practising it for two seasons now. There are some who switched over last year and has witnessed good results.

In Yerraguntla village’s Dhone mandal, around five farm ponds supply water to farmers’ fields during dry spells. These ponds, a vital component under ZBNF, measure 10 metres (m) in length; have a width of eight m and a depth of two metres. As fighting drought is one of the main objectives of ZBNF, the farm ponds store water for use in adverse conditions. 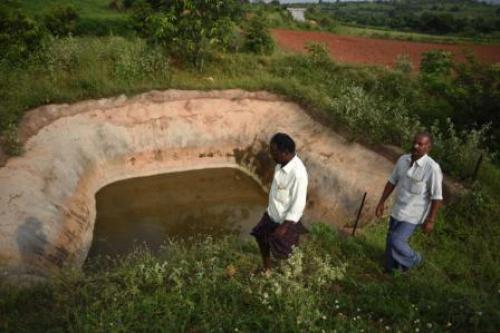 Intercropping is an important feature of ZBNF. Towards this end, Yerraguntla farmers grow pearl millet, red gram, foxtail millet, along with chilies and tomatoes. Out of 300 farmers in the village, around 225 are doing ZBNF. Giddaiya, a local farmer, has been practising ZBNF since last year on 2.02343 hectares (ha) after thorough government training. He grows tomatoes, red gram and pearl millet. When asked about the advantage of practising natural farming, he said his cultivation cost has come down from Rs 15,000 to Rs 5,000. Marappa Naidu has 4.04686 ha of land. Right now, he is practising ZBNF on five acres. To increase the yield, he is also following the navdhanya concept where nine types of crops are grown. “It is a traditional rain-fed area practice. Under this we grow multiple crops along with groundnut, the main crop. Pulses and oilseeds are also grown by farmers as part of Navdhanya. Under this several rows are created containing different crops,” adds Bhagyalaxmi. 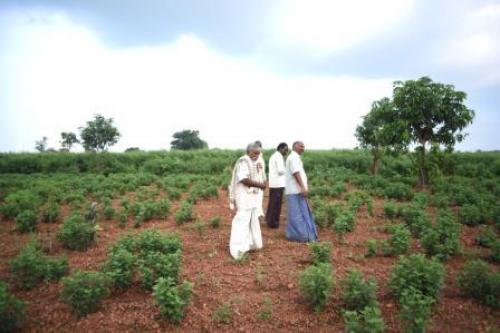 Besides reduced input cost, farmers practising ZBNF gets higher yields. In Anantapuram district, there has been a 136 per cent higher yield in groundnuts under natural farming. Naidu gets five quintals (1 quintal is 100 kg) of red gram under ZBNF compared to three quintals under non-ZBNF.

In Gosanipalli village, around 150 farmers are practising ZBNF. Ramajaneyulu, a local farmer, has 0.809371 ha of land on which he has been practising ZBNF for two years. He has witnessed nine quintals of groundnut as compared to six or seven under non-ZBNF. Besides groundnuts, he also grows onions, tomatoes, carrot and red gram.

According to Harish Kumar of Agricultural Technology Management Agency, it is possible to reduce the cost of cultivation under ZBNF. Farmers use bio fertilizers and that make the soil fertile, thus giving higher yields. Like for the groundnut crop, Kumar says the pods are always filled up as there is no deficiency of calcium.

The Food and Agriculture Organization (FAO) of the United Nations advocates environmentally-friendly farming methods that can take us to a more sustainable future. “We need a global transition to a more resilient and sustainable agriculture that is less dependent on agrochemicals and draws more on natural biological and ecosystem processes,” FAO’s deputy director of plant production and protection division William Murray told Down To Earth earlier.