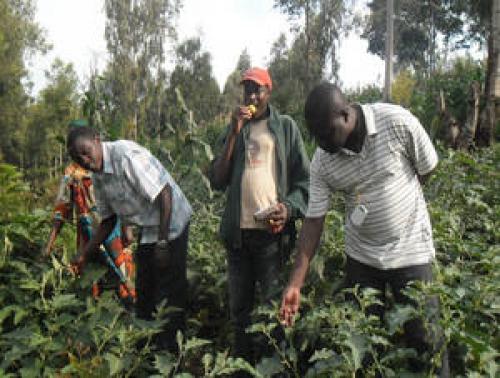 Burundi, a landlocked country in the Great Lakes region of Africa, has adopted integration and efficiency in farming to sustainably feed its population. In Ngozi and Mwaro provinces, efficient agricultural intensification has achieved positive results for the local population.

This works through Farmer Field Schools (FFSs) that help communities manage land better and improve food production. The main aim is to reduce malnutrition and poverty.

In Burundi, more than 90 per cent of the population live in rural areas and depend on agriculture and livestock for their livelihood. The country consists of small landholdings, with double-or triple-cropped plots, which are mostly rainfed and cultivated by hand, producing little or no marketed surplus.

“Due to reduced lands, the people have adopted integration in agriculture to maximise their livelihood,” Salvator Ndabirorere, Food and Agriculture Organization’s (FAO) Burundi consultant on natural resource management, says.

The integrated aquaculture and agriculture system in Mwaro produces a variety of crops and also supports fish and livestock on a small area. The livestock manure fertilises the ponds, which improves fish production while reducing feed requirement.

Diversified income-earning opportunities, such as fish and pig farming, growing more market-oriented crops and specialised activities such as mushroom cultivation provide farmers with the means to earn additional income.

Micro gardens were established in urban and peri-urban areas by nearly 200 households offering smallholders an opportunity to produce despite limited land availability.

From fields to fork

The concept of FFSs, also known as “schools without walls”, started in Burundi in 2008. These schools have proved to be a successful approach for community-based education and extension around the world. It originated in Asia for use in integrated pest management.

Both male and female farmers receive training and assistance in managing crop production through FFSs. These self-identified groups are guided by a facilitator with an objective to increase capacity development through training and research.

The participatory training method makes it possible for farmers to learn, discuss and test agricultural strategies with a view to improving food security. The FFS approach has evolved in recent years and expanded to include aspects relating to nutrition, HIV/AIDS and gender primarily through Junior Farmer Field and Life Schools.

Like rest of Africa, Burundi also faces the problems of impoverished soils and land degradation due to high population pressure on limited lands, deforestation, overgrazing, loss of biodiversity habitats and water scarcity in some parts of the country.

“Many perennial and annual crops have been introduced. Improved composting ensures organic manure reaches rural regions. The Burundi government supports a part of the cost of mineral fertilizers,” Ndabirorere says. The country has now a national framework investment in sustainable land management and new laws on land, forestry and biodiversity conservation.