Ghana, known to provide a favourable price regime to cocoa farmers, discontinues the perks as the crop price crashes in international market 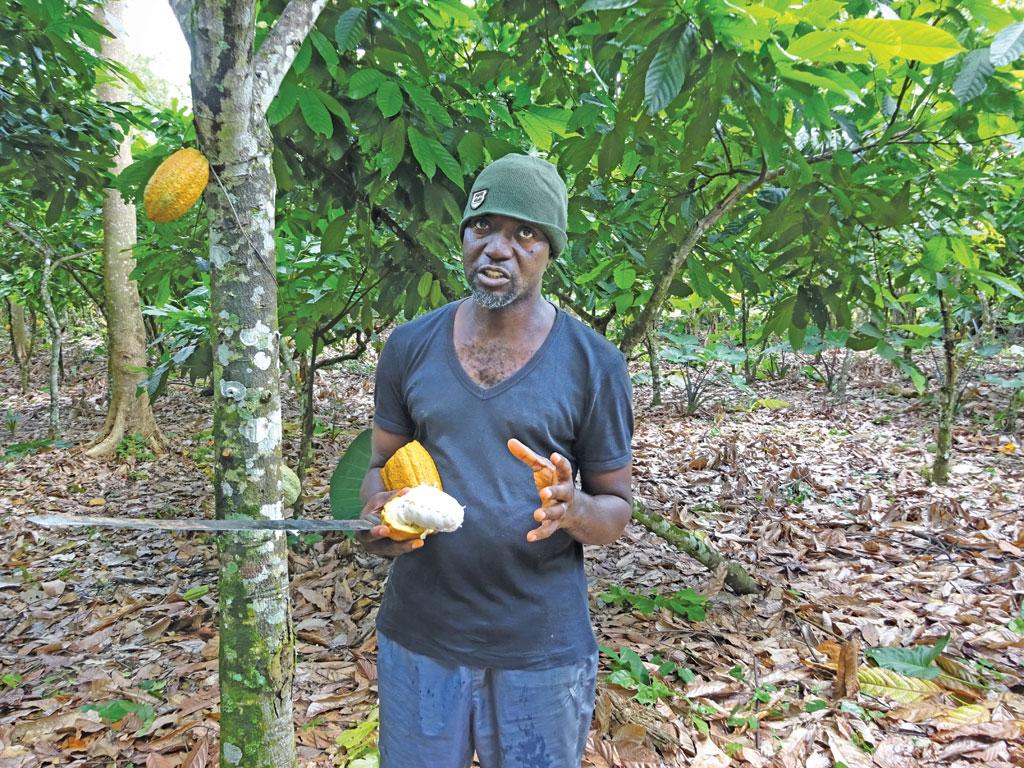 Cocoa farmer Tafo-Nobi says he will have to look for other sources of income if the government does not hike the procurement price (Photo: Kundan Pandey)

Cocoa farmers of Ghana, who form the backbone of the country’s economy, are heading towards an uncertain future. The government, known to provide a favourable price regime to cocoa farmers, has announced that it would not increase procurement price for the crop nor disburse bonus to cocoa farmers for the 2017-18 season. While the government cites continued slump in cocoa prices in the international market as the reason, the announcement comes as the proverbial last straw for cocoa farmers, already incurring huge losses due to ageing plantations, re-emergence of diseases and pollution due to illegal mining.

With an annual production of 0.8 million tonnes, Ghana is the largest producer of cocoa after Ivory Coast. But between the 1960s and 1970s, the plantations experienced a major decline and nearly collapsed in the early 1980s. To motivate farmers, the government introduced reforms in 1987 and offered a share of the revenue earned from cocoa exports to farmers. By 2004-05, the farmers were receiving 70 per cent of the revenue the government earned from cocoa exports. To sustain the regime, the government introduced a mechanism to pass on the revenue to farmers. Every year, it increases the procurement price for cocoa by about 10 per cent and offers a bonus twice a year. But over the past two years, the international price of the chocolate fruit has reduced from US $3,000 a tonne to $1,900 due to overproduction. The Bank of Ghana data shows that between February of 2016 and 2017, Ghana’s revenue from cocoa exports has dropped by 10 per cent. Such is the situation that in September Hackman Owusu-Agyeman, chairperson of Cocoa Board (COCOBOD), said that the board has borrowed US $200 million to pay farmers at last year’s rate and would not hike the rate.

The announcement has hit the tenant farmers and those with small landholdings, who constitute over 80 per cent of the country’s cocoa farmers. Estimates by the World Bank show that cocoa accounts for 67 per cent of the earning in a cocoa-producing household. This assured income prompted Faustina Abgo, a labourer from Sidom village in North Akim district, to take a 1.8 hectare (ha) cocoa farm on lease eight years ago. “My entire family of six works on the farm to ensure that the plants remain disease-free and offer good yield,” says the 45-year-old. On an average she harvests 10 bags (640 kg) of cocoa beans in a year, and offers half of the produce to the landowner. “Last year, I earned US $534 by selling the remaining,” she says. “The amount may not be sufficient to tide us over until the next harvest because of rising input costs,” she adds.

Growing cocoa is labour-intensive, explains Tafo-Nobi, another cocoa farmer from North Akim. First, the tree flowers and bears fruit throughout the year. So, a farmer needs to monitor all the fruits closely and cut it using a machete as soon as they ripen. Since the plant is susceptible to pests and slight changes in the weather, it keeps the farmers on their toes. Most farmers press all members of their families to keep the farm litter-free so that they do not harbour fungus and viruses. The sweet white pulp of each pod contains 20 to 30 seeds. These are the cocoa beans that need to be fermented, dried, cleaned and packed into cocoa sacks before selling. It takes a whole year’s crop from one tree to make half a kilogram of cocoa beans. “If the government does not increase cocoa price, farmers will once again lose interest in the golden fruit,” Nobi says.

The government, which earns 18 per cent of its foreign exchange from cocoa, is alarmed. In fact, between 2009 and 2014, agriculture contributed 25.6 per cent of the country’s gross domestic product (GDP); the chocolate fruit contributed 17 per cent of the figure. As global cocoa prices are expected to remain flat until next year, Minister of Agriculture Owusu Afriyie Akoto asked farmers to produce more cocoa beans to fill emptying coffers. But this is not going to be easy at a time when the crop faces multiple challenges on the domestic front.

The major problem ailing the farmers is pest attacks. Last year, Narty Moses, a farmer from Kodgie village in Ghana’s Central Region, spotted fungal rots on cocoa pods. Within a few days, the black pod disease spread to other plants and destroyed one-third of the yield. He now lives under the constant fear of swollen shoot disease, which is making a comeback. The viral disease drastically reduces plant productivity and kills the plant within two to three years. Between 2010 and 2014, when swollen shoot spread in epidemic proportions, the government had ordered felling of all trees on the infected farms. This year also COCOBOD plans to fell trees over 10,000 ha, or 30 per cent of the land under cocoa, in northwestern and eastern Ghana, which have reported the disease. Though COCOBOD plans to introduce disease-resistant varieties in these farms, it would take two to five years before the plants start bearing fruits.

Ghana, which refers to cocoa as golden fruit, is also standing to lose from its ageing plantations. Though cocoa was introduced in the country in the mid-19th century, a majority of the farms were planted after the government revived the sector in the 1980s. A government estimate shows that around 23 per cent of Ghana’s cocoa tree stock is over 30 years old or unproductive.

Large tracts of cocoa farms are also being rendered unproductive by illegal mining of gold, dubbed galamsey. Armed with a flat pan as miners look for gold in streams and other waterbodies, they use mercury, cyanide and other complex chemicals to extract the mineral. Heavy metals released during the process leaches into the soil of nearby cocoa farms, reducing their productivity. Farmers say it takes 30 years for the land affected by galamsey to recover. The government, determined to raise cocoa production to 1 million tonnes by 2020, has now deployed the military to restrict illegal gold mining. But this may not be enough until it revives the ailing farms.