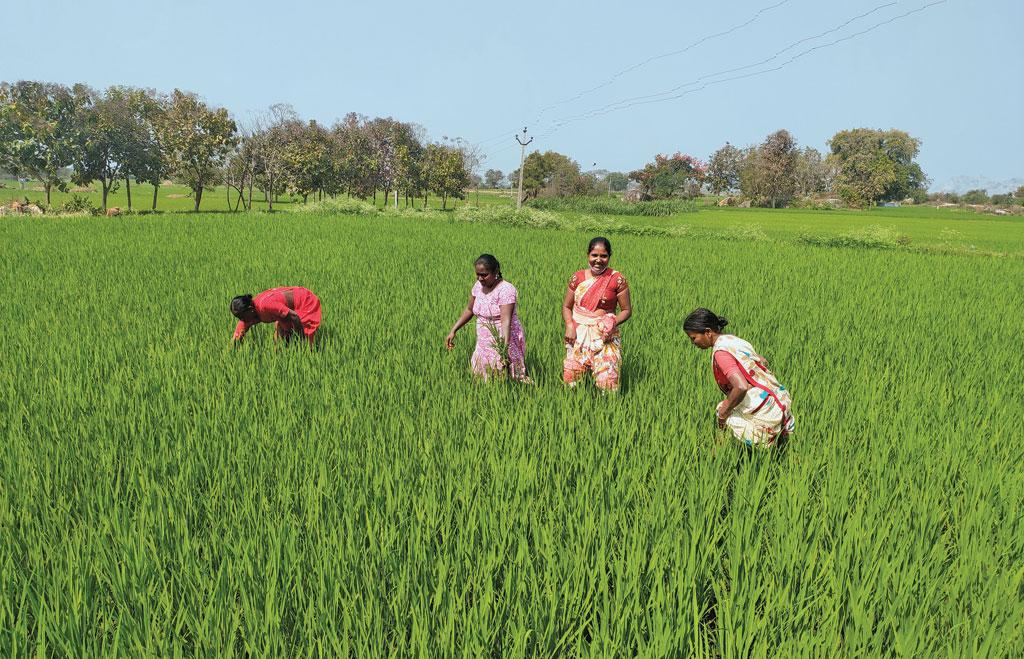 When Chouudamalla Shamala was pregnant with her second child last year, she knew her husband’s salary of Rs 8,000 a month was not going to be enough. So, she applied for a teaching job at the government school in Jagiripali village of Telangana’s Karimnagar district. Soon after, the national lockdown was imposed to curb the spread of the novel coronavirus disease (COVID-19) infection and the school was closed.

A few months later, her husband, who works at the village Panchayat office, faced a salary cut due to the pandemic. “Despite being pregnant, I contemplated applying for works under the Mahatma Gandhi National Rural Employment Guarantee Act (MGNREGA),” says the 26-year-old.

It was then that she heard about an all-women farming group or Sangha being set up in the village by Hyderabad-based non-profit Bhumika Women’s Collective. She immediately signed up.

The group of 10 women took 1 hectare (ha) of farmland on lease last December and started growing paddy. They harvested their first crop on May 10 and are now in the process of selling it. “We will make a good profit even if the paddy sells at the minimum support price set by the government,” says Shamala.

Bhumika Women’s Collective has helped at least 200 small and landless women farmers in Karimnagar and neighbouring Siddipet districts to start group farming during the pandemic. It has provided Rs 50,000 as one-time funding to 20 women’s groups in the state. Group farming has also benefitted women farmers in Kerala. There were over 30,000 all-women group farms in the state cultivating in March 2020 and 87 per cent of them economically survived the pandemic, says Bina Agarwal, professor of development economics who has closely researched and documented group farming in the country for over a decade.

The groups were able to sell their produce, especially fruits and vegetables, locally or to the community kitchens run by the state government under its poverty eradication mission, Kudumbashree. “In contrast many individual male farmers suffered losses,” says Agarwal.

“In Gujarat, 16 all-women group farms were formed after I conducted a workshop there in August 2018. They are now food secure amid the pandemic, whereas several individual farmers have lost out because of labour and sale bottlenecks,” she adds.

There are similar initiatives in Gujarat facilitated by other organisations. Agarwal cites similar success stories for Bihar where the higher wheat yields of farmers’ collectives provided the members enough grains for subsistence during the crisis, while individual farmers were dependent on a less reliable public distribution system.

“Two years ago I borrowed Rs 50,000 for farming but I lost the entire crop. I felt so bad that I didn’t eat food for three days,” says 45-year-old Jaya, the only member in Shamala’s group in Telangana who owns a piece of land. In a group, the risks are divided.

This is important as rains are erratic and irrigation is non-existent in the region, she explains. “Even if we suffer a loss in this crop, we can tide over it and return loans we may have taken collectively.” The yield also goes up because group farms can afford tractors, pesticides and fertilisers. “These are normally too expensive for a small farmer,” she adds.

Jaya has leased 0.2 ha to the sangha for Rs 20,000. She will get an additional Rs 6,100 as her share in the profit made by the group. Of this, Rs 4,650 will be in cash and the remaining in paddy bags. She will also receive Rs 600 a day for the labour that she put in during the cultivation period.

While the Sangha grew paddy in the first year because of the assured minimum support price and good rains, they are open to diversifying. “If the rains are good, we might continue with paddy, if not, we will go for groundnut, maize or millets,” says Jaya. They are also exploring goat rearing in the future.

The concept of group farming is not new to the country. Several states have in the past experimented with it but with limited success. While the initiative has worked well in Kerala, Bihar and parts of West Bengal, it has faltered in most other states, including Telangana. “The latest initiatives in Telangana are different,” says P Prasanthi, director, Bhumika Women’s Collective. “Earlier, the size of the group was large (around 30). The women were working only for a few hours in the sangha while focusing more on their family land.

The income was also lower as the produce was distributed among all the women in the sangha,” says Prasanthi. In the current model, the group size has been reduced to 10 making it more manageable. The women now view the collective work as their primary source of income, she says. The model also has a provision for the sangha to retain 5 per cent of its profits so the initiative remains financially sustainable.

In Goa, a modified version of group farming is helping people return to agriculture during the pandemic. “Over 95 per cent of the farmers in the state are small and marginal. Over the generations, this land got further divided and a major share of the land is now uncultivable,” says Nevil Alphonso, state agriculture director. So the state government decided to roll out a programme in 2018 where farmers could collectively create irrigation facilities or carry out farm fencing and receive a one-time subsidy worth Rs 2.5 lakh per hectare for the same.

What sets the model apart is the fact that while farmers have to collectively create the assets, they do not need to farm together. The reason, says Shariff Furtado, zonal officer, Salcete taluka in South Goa, is that the state already provides a lot of incentives to individual farmers, making it lucrative.

The first group of farmers in Salcete taluka received the incentive money in November 2020 and the impact is already visible. Stray cattle often enter farms and destroy crops. This can be avoided through fencing, but it is too expensive for most small farmers.

“Many people have returned to villages and are resuming farming because of collectively built affordable fences,” says Furtado. As per government records, farming activity in the taluka has risen by about 20 per cent and around 20-25 ha of land has been reclaimed for farming since last November.

The state has another interesting variation where entire villages collectively hire modern expensive machines like harvesters on rent to work on individual fields. This practice was first put into action in 2015, when the residents of St Estevam village decided to stop a builder from developing a piece of fallow land in the village into a carriageway to transport coal.

The 200-odd residents formed the Ilha Verde Farmer’s Club and jointly cultivated paddy and turned around 45 ha of fallow paddy fields arable. The group took help from Father George Quadros of Don Bosco Society, who had been experimenting with mechanised farming since the 1980s. Currently 1,000 farmers across 25 villages hire the machines in a group.

“Farm mechanisation is costly, but can reduce farming cost by 60 per cent when used over large areas,” says Furtado. Now when a machine reaches a village, it does not work on a single farm, but over 20 to 25 small farms. Such collective benefits are at the heart of group farming.