Pandemic forced Punjabi farmers to adopt a less water- and labour intensive rice growing technique because of labour shortage; it now might become the norm 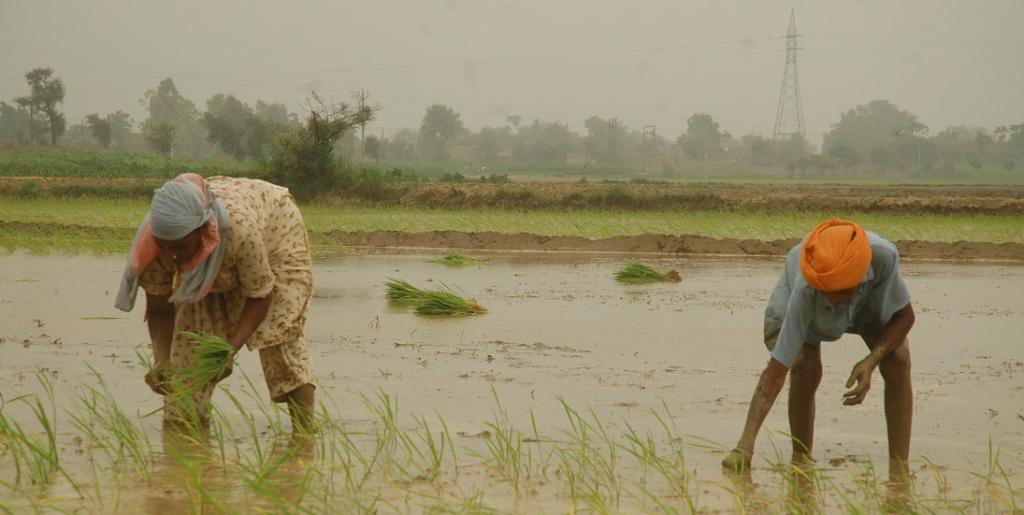 The Transplanting Rice or TPR method is a water- and labour intensive method and has been blamed on Punjab's decreasing groundwater levels. Photo: Agnimirh Basu / CSE

NOTE: This story was published on November 20, 2020, with the headline ‘COVID-19 might have just saved Punjab's declining groundwater’. The headline was subsequently changed to the current one to reflect changes in the story

Punjab’s declining groundwater levels might have got a much-needed boost this year from an unexpected source: The novel coronavirus disease (COVID-19) pandemic.

Over 20 per cent of the area under paddy cultivation in Punjab was brought under the ‘Direct Seeded Rice’ (DSR) technique, a less labour-intensive method of sowing the crop, this kharif season in the state.

Many farmers who were hesitant before or had not adopted the technique earlier owing to one reason or the other, shifted to it for the first time this year and also got good results.

The trigger was the acute agricultural labour shortage caused by reverse migration in the wake of COVID-19 pandemic and that too at the peak of paddy sowing season this year.

Of the total 27 lakh hectare rice area, cultivation in 554,000 hectares was done through the DSR method in 2020, according to data till August 5. This is a significant improvement for a state that could bring only 387,000 hectares under DSR in the last nine years.

The development bodes well for Punjab’s groundwater table that has declined in about 85 per cent of the state between 1984 and 2016, according to Central Ground Water Board data.

The traditional and prevalent way across India is transplanting rice (TPR) seedlings from a nursery to waterlogged fields. Since groundwater is the major source of irrigation in Punjab, TPR is extremely labour- and water-intensive, unlike DSR, which can help reduce water consumption by as much as 30 per cent and labour needs by 60 per cent.

Farmer Harvinder Singh had been hearing about it for some years now but had never really tried it, except this year when he was left with no choice.

The result was good. Singh, a farmer from Dhanaula village in Barnala district, got a good yield and also reduced his cost of production by around Rs 4,000 per acre.

Even though he adopted DSR this time due to circumstances, he is enthusiastic about shifting to it completely next year from the highly water- and labour-intensive transplanting rice (TPR) method.

He says that of around 12,000 acres in his village, around 1,000 acres shifted to DSR this time. This is a promising trend.

The transplanting technique is also a major source of methane, a greenhouse gas. Methane emissions can be reduced by six per cent to 92 per cent in the DSR method, according to a 2011 study published in Advances in Agronomy.

In the past few decades, many state governments have been encouraging farmers to move to DSR because it is easier on the environment, but without much success. However, it seems like the pandemic did the trick in Punjab this time.

“The response we have received from farmers this time is promising and we are already preparing for next year. The state government has taken it on priority and said that we should not wait for the next kharif season but start awareness from now onwards. The availability of drill machines was an issue earlier but now that is not a constraint anymore,” MS Bhullar, principal agronomist, Punjab Agricultural University (PAU).

In April this year, PAU, along with the Punjab government, had encouraged farmers to adopt DSR, when the state faced agricultural labour shortage.

Currently, PAU is also working on a prototype machine that will address problems encountered by farmers this year.

Some farmers had reported that untimely and sudden rain immediately after seeding had adversely affected crop establishment and reduced availability of soil nutrients such as iron and zinc. Germination stopped in some cases as a crust was formed on the crop.

“The prototype we are working on will have modifications in the drill machines. There will be additional attachments which will prevent any moisture loss and thus, we can address the crust problem. We have done small scale testing and want to do that at a large-scale level; after that we will recommend it,” Bhullar said.

Baljar Singh, who sows rice in his 12 acres of land, said he must have saved around 30 per cent water usage.

“The quality was also good. And I saved around Rs 5,000 per acre,” he said. However, his only problem was the increased attack by rodents which happens less in TPR, where fields are flooded and hence rodents cannot survive in them.

“If this problem can be solved, I will shift my full 12 acres to DSR next time,” Baljar said.