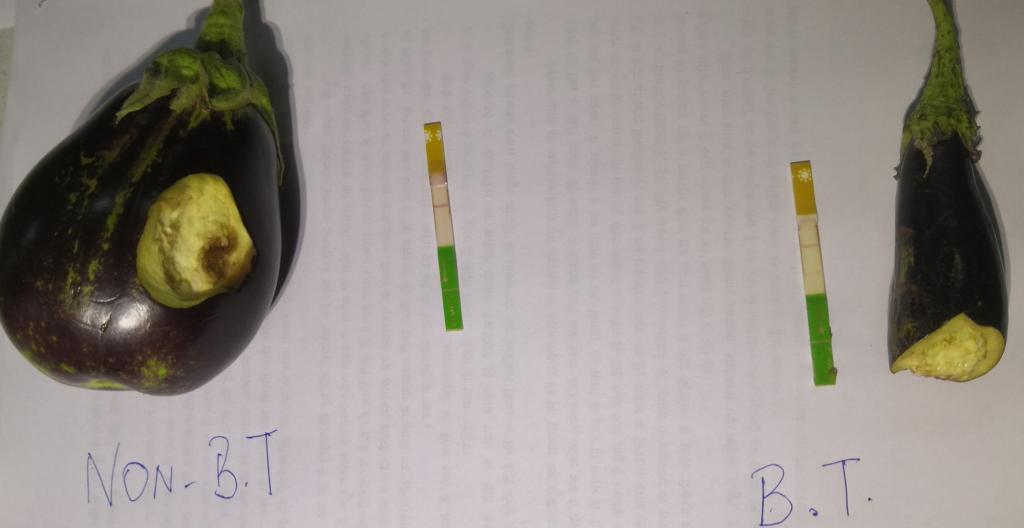 India banned Bt brinjal in 2010 but, nine years on, the genetically modified (GM) crop is still in circulation, said activists on April 25, 2019. They cited the example of a farmer from Haryana’s Fatehabad who allegedly has been cultivating the crop for a couple of years now.

Representatives of the Coalition for a GM-Free India also demanded immediate action from the central and state governments.

The Fatehabad farmer was happy with the GM crop being unaffected by Shoot and Fruit Borer (BFSB), the most common pest. He was, however, using pesticide against other pests, activist Rajinder Chaudhary said at a briefing in Delhi.

Chaudhary, who works on sustainable and natural farming, said he learnt about the “new” variety of BFSB-resistant brinjal in the market during a conversation with farmers. When he collected samples from the field and conducted a preliminary ‘lateral flow strip test’, it tested positive for Bt Cry1Ac protein.

Samples have also been sent to a private laboratory to be tested, the results of which are expected by the month-end.

The activists, meanwhile, have presented existing evidence to the state’s horticulture and agriculture departments. A complain to the Genetic Engineering Approval Committee (GEAC) on April 24 did not receive any concrete response, they alleged.

Bt brinjals are sold in the local mandis like any other brinjal. At Rs 8 a piece, in fact, the GM seeds were exorbitantly more expensive than normal ones (that sell for Re 0.5-1). A farmer would need 3,000 such seedlings to sow an acre.

Secrecy shrouds the transactions and farmers are unaware of the source of the seeds. They receive it from intermediaries at bus stands, Chaudhary said.

The debate around BT brinjal started in 2000 when Mahyco (Maharashtra Hybrid Seeds Co) came up with a GM brinjal. Seeds were exported to Bangladesh and Philippines in 2006, as the civil society resisted field trials in India.

In 2013, the cultivation of Br brinjal was taken up by the Bangladesh government with initially successful results. A few years down the line, however, the crops lost their resistance to pests. Officials though have maintained was a success and last September India was reportedly considering replicating the Bangladesh model.

The story of Bt brinjal is currently similar to that of Bt cotton, which also entered India illegally and made it to the fields, said Sridhar from Thanal, an organisation working on natural farming and agricultural issues in Kerala.

The Bangladesh model clearly shows that pests develop resistance and would hinder production, he added.

“We have more than 3,000 varieties of brinjal in our country; if Bt brinjal makes through, all varieties will be contaminated. A similar situation has occurred in case of cotton and farmers and horticulture officials have stopped collecting varieties from the field as they are contaminated,” he said.

The activists demanded that the GEAC should