Desertification in India: Ananthapuramu in Andhra is so sandy it draws filmmakers to shoot 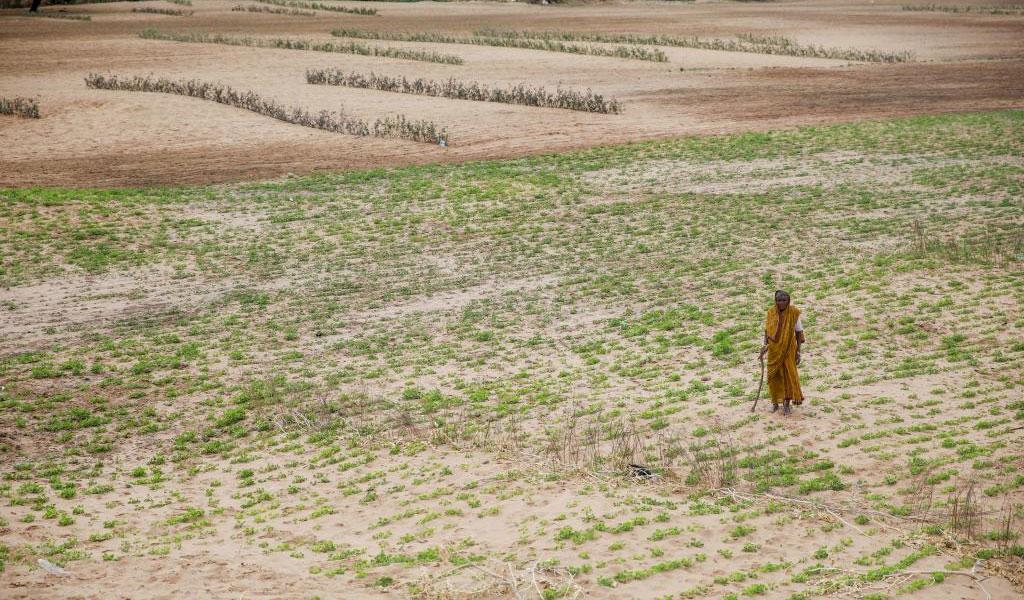 Soil erosion has created a vicious circle in Andhra Pradesh’s Anantapuramu district, infamous for recurrent droughts. Water stress and droughts have always been part of the district’s history, which falls in the rain shadow region of Rayalaseema.

But in recent decades, winds blowing over the region have become somewhat hot and ferocious. While rains have become scantier and more irregular, water beneath the ground has disappeared.

In Dargah Honnur village, 75-year-old B Tippa does not know how to guard her 2 ha groundnut field from a sand dune adjacent to it. “With wind, the crop gets buried under the sand,” she says.

Dargah Honnur is not a desert. Malla Reddy of Accion Fraterna Ecology Centre, a trust in Anantapuramu which has done a study on the origin of sand dunes, says sand dunes in the village are the result of a natural disaster, which could have shifted the riverbed of the long-dried up Vedavathi river. Wind and water erosions must have led to the rise of sand dunes.

Today, the village has around 2,000 ha of sand dunes, prompting people to call it ‘ocal Rajasthan’ and filmmakers to shoot desert scenes.

Tippa claims the dunes have been there since her grandfather’s time. But covered with trees and shrubs, they were stable then. The sandstorms are a recent phenomenon.

While the shifting dunes have affected only a part of Tippa’s farm, they have engulfed the entire farms of many others, forcing them to migrate or take up other means of living.

One such person is KC Narayanswami, a 63-year-old grocery shop owner in the village, who lost 0.8 ha to sand dunes a few decades ago. “I worked the land along with my father. But slowly, sandstorms rendered it unproductive. Now it is all sand,” he says.

He became a farm labourer to a far away village for 20 years. He still remembers his land survey number and seeks for compensation for his land.

Very few in the village now farm. As a preventive measure, village residents allow outsiders to take away sand for free. But this destabilises the dunes.

The dunes stop appearing as one moves away from Dargah Honnur, but only to be replaced by rocky and laterite soil. “Soil quality is worsening every year. We are losing more moisture than we get through rains,” explains KC Natraj, soil scientist at the Acharya NG Ranga Agriculture University (angrau), Anantapuramu.

He was part of the team that provided district-level data to sac for the atlas.

In drylands like Ananthpur the annual potential evopatranspiration (PET) — the evaporation in case sufficient water source is present — exceeds annual precipitation. This has worsened the soil quality, increasing desertification.

PET defines as the amount of evaporation that would occur if a sufficient water source were available. The moisture index of the district is -75.5 per cent.

One of the reasons for this poor soil quality is dwindling rainfall over the region. A 2017 study published in Angrau’s Journal of Research, on rainfall pattern of 25 years (between 1988 and 2012) shows that aridity in the district has been increasing.

Moisture Index (MI), which indicates water content in the soil and is crucial for crops, varies between -67.4 and -84.7 in all the 63 mandals of the district. Such low MI indicates that the rainfall received is not sufficient to meet the potential evapotranspiration demand.

“We have eight different climatic zones but all mandals of the district come under only three climatic zones of arid, hyper arid and super arid,” says S Malleswari, agro-metrologist at angrau, one of the authors.

The study also analysed the trend of MI in all mandals to assess the intensity and magnitude of aridity. While aridity has been increasing in 46, there is a decreasing trend in 14 but at an insignificant level.

“In the last three decade, scientist have noticed that the region is witnessing increasing dry spell, erratic rainfall and 80 per cent reduction in the soils water retention capacity,” says Malleswari. “All these show that immediate need to concentrate on contingency crop planning and drought preparedness,” she adds.

Borewells are also responsible for this increasing aridity: There are 260,000 borewells in the district, of which only 50,000 borewells now function.

This aridity has deteriorated soil productivity. Between 1999 and 2015, acidity of the soil has increased by more than 4 per cent. Organic carbon in the soil, which is considered the building block of soil, has reduced by 84 per cent.

Between 1999 and 2015, acidity in the soil has increased by more than 4 per cent, says the angrau study, while the organic carbon in the soil — considered the building block of soil — has reduced 84 per cent.

The availability of nitrogen and potassium dioxide too reduced by 55 per cent and 43 per cent. The soils are also highly deficient in essential micronutrients like zinc, iron, phosphorous and potash.

Last year, the Government of Andhra Pradesh brought the Handari Niva Canal. It increased 40 per cent irrigation area in Kharif season. Farmers started using the canal-irrigated area for horticultural — for crops such as orange, grapes and banana.

But experts are concerned over the new cropping pattern. “The large scale drying of borewells is the result of exploitation of ground water for new horticulture crops,” says Reddy. “People are extracting ground water like anything to sustain these water-guzzling crops” he adds.

The soil of Ananthpur district supports mostly trees related crops, which would save soil erosion and also enrich soils. “Trees like tamarind, drumstick, gooseberry, neem will be economically and environmentally beneficial to this region” suggests Reddy.