Drought, but why: Area under cultivation has halved in Andhra Pradesh's Ananthapuramu

Decades of deficit rainfall, monoculture in agriculture and perpetually mounting farmer debts have left the district in the lurch

Few districts can demonstrate how droughts can break farmers’ backs as Ananthapuramu. The Rayalaseema region of Andhra Pradesh anyway throws up a challenging landscape to agriculturists. Even among those four southern districts Ananthapuramu — earlier Anantapur — has historically been the worst off.

The district has been drought prone for more than a century, rainfall data shows. The situation has only worsened in the recent past: In 272.8 millimetre rainfall, about half of what it normally receives and the least in a century.

The crisis is apparent from the depleted water levels of Anantapur’s tanks: there was only 1.75 thousand million cubic feet (TMC ft) water in 163 tanks in the district in January 2019 — way below the 26.3 TMC ft capacity in 1,263 tanks. Among medium irrigation projects there, the Bhairavani Tippa project held only 0.038 TMC ft (capacity: 2 TMC ft), Yogi Vemana reservoir had 0.432 TMC ft (capacity: 0.9) and the Upper Pennar project was practically unusable.

The district administration is caught between dividing the meagre volume for drinking water as well as to irrigate 1.05 lakh acres of ayacut crop. Only about a third of the villages there have access to drinking water, SM Basha, an activist, said.

The crisis manifests itself in the shrinking area under cultivation. In 2010, more than 10 lakh hectares were estimated to be under the plough. More than half of it was gone by 2017.

“Anantapur’s red soil can’t retain water long. There have been only three normal monsoons in the last two decades and the tanks get charged once a decade,” YV Malla Reddy of non-profit Accion Fraterna Ecology Centre said. Also, the district is the only one whose forests are left treeless.

A trend towards monoculture of groundnuts, away from the earlier practice of multiple crops, has not helped. “Artificial fertiliser quickens the evaporation of water from soil. To get back to an earlier stage, only organic manure has to be used for two-three decades,” Reddy added. 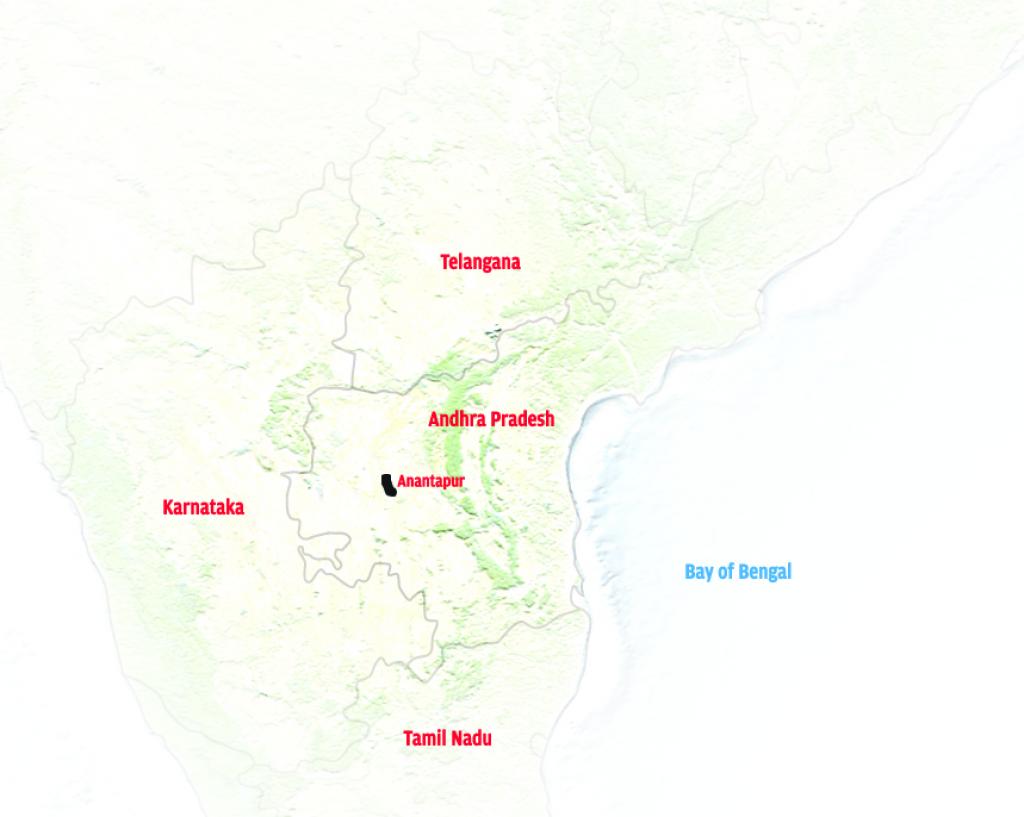 Forty years ago the district would face drought once in every three years. But that rate has soared since 2000. Erratic rainfall, outside crop cycles (eg, 10.4 mm last January against a normal 1.6 mm ) benefit farmers little, he added.

No wonder the administration has declared all 63 mandals of Anantapur drought-affected. “Rainfall was normal last in June 2018. July and August had shortfalls of 70 and 66 per cent, followed by a 72-day dry spell. This cost the groundnut crop on 5.4 lakh acres,” SK Habib Basha, joint director of agriculture in the district, said.

After some rain in October, it rained again in January, wasting away the entire Bengal gram crop in the process.

Such crop losses have huge financial implications for the district’s 3.6 lakh population (2011 census). “Farmers recycle their loans, hoping losses would be reimbursed,” R Chandra Sekhar Reddy, district secretary of All India Kisan Sabha, said. Rescheduled loans more-than-tripled to Rs 4,576 crore in 2017-18. Such recycling comes at a cost: farm loans attract an interest of 7 per cent per annum plus fees and taxes.

The state government, however, has reimbursed farmers Rs 2,885 crore in the last decade against a loss of Rs 30,290 crore on input costs, the peasants’ front estimated. Add to that the Rs 60,000 crore they would have received, selling the produce and the notional loss reaches Rs 1 lakh crore. Five-six farmers have taken their lives every month the last five years, the Sabha claimed.

“The government has been in denial on suicides,” activist Basha said.

The agrarian crisis comes out in the 10-fold jump — 1 lakh-plus in rabi 2018 from a little over 10,000 in rabi 2017 — in the number of farmers who sought cover under Pradhan Mantri Fasal Bima Yojana (PMFBY), India’s centrally funded crop-insurance scheme.

Not that insurance, or the broader financial sector for that matter, have helped much. About 60 per cent of those who enlisted for the Weather-Based Crop Insurance Scheme (WBCIS) won’t get anything; the rest too are yet to be paid, T Ramanajaneyulu, a farmer at Hampapuram village in Raptadu mandala, told DTE.

The scheme, anyway, works on the basis of rainfall volume despite the fact that it may not be uniformly spread. PMFBY does take local variations into account but it is not applicable in Anantapur on its groundnut for kharif, when it the principal crop. It is, however, applicable in rabi, when it is not that widely sown. In Srikakulam in the same state, however, that is not the case though groundnut covers only 10 per cent of the acreage there.

While banks pay no interest on delayed insurance payments, they hardly spare farmers if they default. “The interest doubles even for a day’s delay, even in the case of gold loans. The bank anyway lends us Rs , 15,000 for gold worth Rs 35,000,” Y Sanjeeva Reddy, another farmer from the village, said.

The state government hasn’t been of much help either. “Despite a promise to waive off farm loans in 2014, the N Chandrababu Naidu government hasn’t done much about it, at least going by the farmers of the district: Only Rs 8,000 of a Rs 1.5 lakh loan was waived off for us,” D Dasara Reddy, a farmer from Gollapalli, said. He lost his groundnut crop ironically due to incessant rain for 15 days in 2014-15. He received nothing despite officials promising him Rs 30,000.

Nearly Rs 1,644 crore was due to beneficiaries of various schemes in the district, V Rambhupal, district secretary of the Communist Party of India (Marxist), said.

There is hardly any opportunity elsewhere though. Even the Mahatma National Rural Employment Guarantee Scheme is not utilised to potential. “Only 2,98,689 found employment while 7,98,289 have job cards, A mere 64,606 were employed for the whole 100 days. Payment arrears run up to one and a half years,” O Nallappa of the Andhra Pradesh Agricultural Workers Union, said.

Activists like Basha allege a nexus between politicians and bureaucrats. “Contractors and politicians are indistinguishable, leading to siphoning of funds meant to mitigate drought,” he said.

Rambhupal points out that the previous Congress regime had set up the Ayyappan Committee in its final days. Naidu’s Telugu Desam Party regime rechristened it to NTR Aashayam but nothing much was done, he alleged.

According to him, the district, where only 7 per cent of the land is irrigated, should be declared drought-affected permanently as the Swaminathan Committee recommended (for wherever irrigated area is below 10 per cent).