Drought but why: Jharkhand staring at food insecurity

Primarily a rain dependant state, Jharkhand is witnessing deficient rainfall for the past few years now and even its relatively well-off farmers are becoming daily-wage workers

Jharkhand is drought hit. In November 2018, the state government declared 18 out of its 24 districts as drought-affected. While 93 blocks were severely affected, 36 were told to be moderately drought-affected. As per weather experts, seven districts, namely Koderma, Bokaro, Chatra, Deoghar, Garhwa, Khunti and Pakur recorded rain shortages of 40 per cent and above in the 2018 monsoon. Koderma and Pakur received 55 per cent less rains than its normal monsoon quota. East Singbhum and Latehar were the two districts to have received excess rains of 14 and 2 per cent above its normal monsoon average.

Delayed onset of monsoon caused rain deficiency of 33 per cent in June that affected sowing and less rain in October affected standing crops. Monsoon exited from Jharkhand in October with overall rain deficit of 28 per cent.

Fifty-year-old Ashok Turi of Dhargaon village under the same panchayat in Domchanch block of Koderma district of Jharkhand is a worried man. Once a rich farmer, he may soon have to convert to a daily-wage labourer. Turi, owner of seven acres of farmland, has failed to produce rabi crop this year. Result: his savings are drying as fast as the water-level around his village. Condition is no different for Deep Narayan Yadav (50), owner of three acres of farmland. He took the risk of hiring water lifting motor pumps at the rate of Rs 200 per hour and sowed wheat in one-acre land. But insufficient water provision resulted in dying of the entire crop. Delayed monsoon and inadequate irrigation facilities, both said, are the major reasons behind their crop failure.

Five years back, annual yield from Turi’s farmland used to be around 240 quintals. “We noticed gradual trend of deficient rainfall. Two years back the annual produce came down to eight quintals only. Unfortunately, last year I could produce only 2.8 quintal rice. And could not sow any rabi crop,” Turi rues, adding that not only his agriculture land, even cattle and humans would suffer this year due to the drought.

In Berwadih, another panchayat in the same block, big farmers like Ramchandra Yadav (65), Nandkishore Mehta (70) and others are apprehending worse days ahead. “July is the ideal time to sow paddy. But for last few years, we are being forced to wait till end of August. This is not a good trend. Delayed monsoon and early exit, both results in poor yield or crop failure. Along with that, water bodies do not get filled up and the water table also does not recharge. We have five tube wells in our village and four ponds. While ponds have almost dried, the tube wells will go dry soon,” said Ramchandra Yadav. Poor crop yield for the fourth consecutive year has forced Yadav’s three sons to work at the nearby mica mines and stone cutting mines. 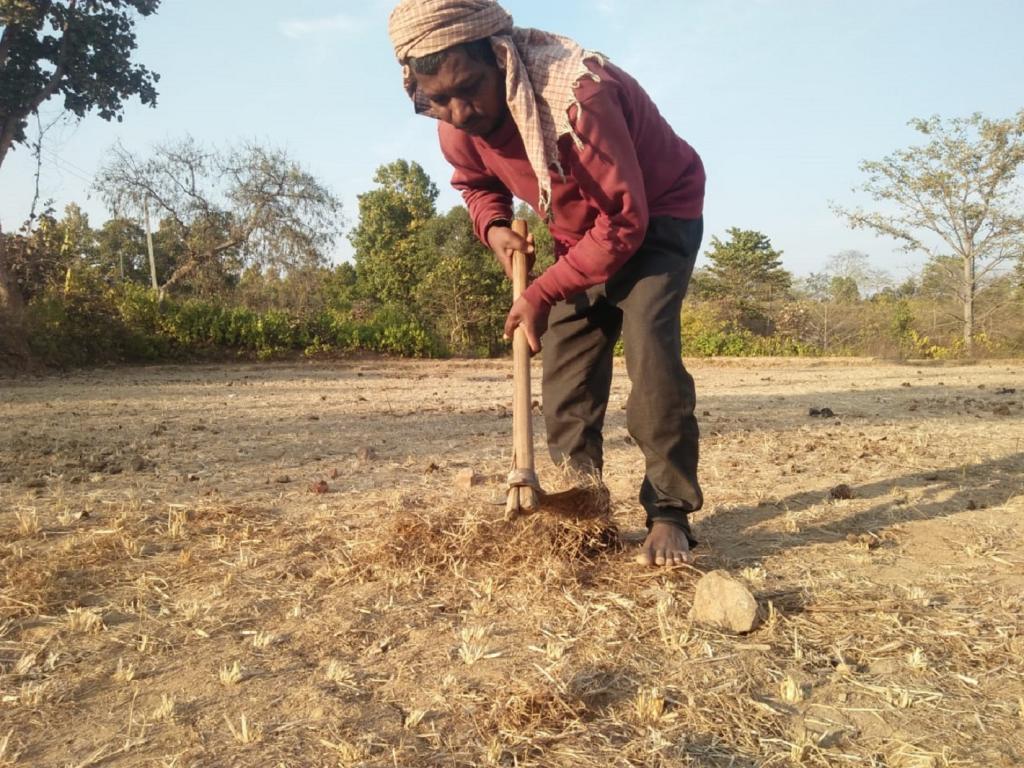 The drying and vanishing water bodies

Lack of water for irrigation was accounted as the biggest reason behind poor or no crop yield. “Scanty rainfall is definitely an issue, but if we could have arrested the minimum water that we received through the rainfall, it would have been great. But we do not have proper rainwater harvesting bodies. And few that we have are not scientifically designed to hold water or recharge the water table,” said Gandauri Ram of Araiya village in Dangarwan panchayat under Markachcho block in Koderma. For the past two years, there had been no crop produce in anyone’s land. “Around 150 households are dependent on wells that have muddy water. This summer is going to be further punishing,” said Ram who has one bigha land that he could not use for kharif last year. Now he goes to mica mines for livelihood.

The water bodies around Dhargaon tell the tale of other similar water reservoirs. A large pond (colloquial- Ahara) spread across 20 katthas is not left with enough water for even animals. “This ahara used to irrigate all the farmers’ lands till four years back. Now it is good for nothing. It is muddy now, by next month it will completely dry up,” said Turi.

The state government, in May 2016 resolved to construct around six lakh ‘dobha’ (farm pond) by the end of year 2017. The target, as set by the government, was to construct 20 dobhas in 31,814 revenue villages under Mahatma Gandhi National Rural Employment Guarantee Scheme (MGNREGS) by March 2017. In a letter sent to all the deputy commissioners of the state by the MGNREGS commissioner in May 2016, it was directed that by the end of June 2016, construction of at least five dobhas should be completed. Going by which total 159,070 dobhas were to be completed. However, till March 2017 only 40 per cent of the target could be met.

Agriculture Meteorology Chairman in Birsa Agriculture University, A Wadood said that Jharkhand is primarily a rain dependant state. The state has around 28 lakh hectare net cultivable land in which kharif is grown, out of which rabi crops are grown only in six to seven lakh hectare land. Jharkhand is a mono-cropping area due to less availability of irrigation facilities, which are necessary for rabi crops.

“In Jharkhand, out of the 28 lakh hectare cultivable land, around 18 lakh hectare is used for paddy cultivation. Around six to seven lakh hectares are used for maize, two to three lakh hectares for pulses and around 70 thousand for oil seeds and the remaining on other cereals. In the year 2018 only 83 per cent coverage of the total available land was recorded,” he said.

Sources in the agriculture department said that in the year 2018 paddy was sown in only 16.27 lakh hectare land out of which 40 percent was destroyed due to rain deficiency.

James Herenj, convener of Jharkhand MGNREGS Watch said that 90 per cent of the irrigation0-related issues would have been solved had the state focused on the issues related to work plans. “Villagers are the best persons to understand and tell, where a dobha should be constructed, where it will hold water for long. In 2016-17 works were undertaken, defying discussions and schemes drawn by the villages, as a result more accidents (death of children due to drowning) were reported. Following which people’s interest to construct dobhas took a back seat. Secondly, wages under MGNREGS continues to be a big issue. Under MGNREGS, currently the wage is Rs 168 per day which is much less than Jharkhand government’s minimum wage of Rs 239 per day.  As a result, people in need of work get more inclined towards private work,” he says. The state government has sought Rs 818 crore from the Centre for relief activities in the drought hit blocks of Jharkhand