Drought, but why: Karnataka’s water woes won't go away by throwing money on it

At a time when Sidhanna Yelalinga would normally prepare to harvest his four acres of winter jowar, the 62-year-old farmer is busy salvaging fodder from failed crops.

“Instead of three quintals of jowar, I have 10 kilogrammes. It’s a complete loss,” laments Yelalinga. At three quintal, his kharif tur was also less than five per cent of the yield from a year ago.

Yelalinga is not alone in this plight. Not in his village Ladchincholi, not in Kalaburagi district, but in the entire state that has suffered successive monsoon failures.

Nearby, in Nellur village of Aland taluka, farmer Shankar Patil stares at a grim prospect: His rabi Bengal gram hasn’t even sprouted, far from fetching income.

“The rainfall has not only been poor, but untimely too. This has disturbed the crop as well as our water rationing. Everything is dry now. There is usually 10-12 feet of water here, but this year it has been dry for nearly two months now,” Patil says, peering into his empty open well.

North interior Karnataka — in the rain-shadow of the Deccan plateau — is no stranger to droughts. Most of the average 650 millimetre of annual rainfall comes from the southwest monsoon and some from the northeast monsoon in October and November.

It has, however, branded itself as a hotbed for dryland agriculture despite an unforgiving summer sun and a persistent lack of irrigation.  But the conditions in the past year have taken even these drought-hardened agriculturists to the edge.

First, the southwest monsoon failed with rainfall almost 30 per cent below the average 506 mm. Next, the northeast monsoon was also underwhelming. The deficit was more than 60 per cent in most of the 12 districts in the region while one recorded a 50 per cent deficit.

While the rainfall was good before September 2018, there was hardly any in the crucial rabi period, says says GS Reddy, director of the Karnataka State Natural Drought Monitoring Cell (KSNDMC). Moisture adequacy indices (MAI) is below 25 per cent in most of northern and eastern Karnataka indicating a severe drought, he points out.

Only 8.7 per cent of Kalaburagi’s 10,49,210 hectares (ha) of cropped area is irrigated, according to the Union government’s Land Use Statistics database. The extent of government canals and tanks is a pitiable 1.8 per cent. Private borewells and individual wells cater to 58,346 ha.

Subanna Biradar, who uses a borewell for his three acres of sugarcane, says: “Borewells can only supplement water requirements. our main dependence is still on the rains.” Despite the wells, productivity has halved, Biradar, who is the director of rural development non-profit Bayalu Seeme Rural Development Samsthe, adds.

A 10 ha tank near Donnur village is the only water source for nearly 1,500 families of Nellur and nearby villages. The reservoir, with a solitary unfinished and unused canal snaking out, is now little more than a swirling bowl of dust.

Water in the tank usually suffices until the summer months, but this time it wasn’t even enough to tide over the winter, says Gundappa Chinchawlikar of Donnur. He lost 90 per cent of his tur, urad and moong crops.

According to the KSNDMC, up to 80 per cent of minor irrigation tanks in northern and eastern districts dried up by end-December 2018. Another report prepared by the state government at the end of January 2019 states 43 per cent of Karnataka’s tanks have gone dry while the rest have water about 30 per cent of their capacity.

The HD Kumaraswami government declared 176 talukas of the state drought-hit following the southwest monsoon. In the rabi season, it has again declared 156 talukas affected.

Nearly 90 per cent of Karnataka’s 31.8 lakh ha rabi area is in the northern region, among the worst-affected by drought and water stress. Cropping areas for oilseeds and coarse cereals have fallen 61 and 15 per cent respectively in the 2018-19 rabi season.

More than half the crop was reported to be lost from 18 lakh ha — almost 70 per cent — of cropped area, Reddy says. The number was 21 lakh hectare the previous season.

Initial estimates have pegged the losses of the rabi season at close to Rs 11,350 crore, while losses for the kharif season have been evaluated at around Rs 16,000 crore. The drought has slowed down the growth of the Karnataka’s gross domestic product to 9.6 per cent from 10.4 per cent the previous year.

And it’s endemic. Nearly 60 per cent of Karnataka was drought-hit for 9-11 years between 2001 and 2015, according to a 2017 KSNDMC report. There have been three years of severe and protracted droughts since 2015. More than a third of the talukas are ‘highly’ or ‘very highly vulnerable’.

Animal husbandry is on the decline, locals say. The few who retained livestock have started selling in distress.

Ambaraya Bajantri has 20 goats and four acres of land that he shares with his brother. They spent Rs 30,000 on kharif tur this year, but it yielded nothing. To tide over the loss, the Bajantris had to sell a fifth of their goats at 50-60 per cent of the market price. 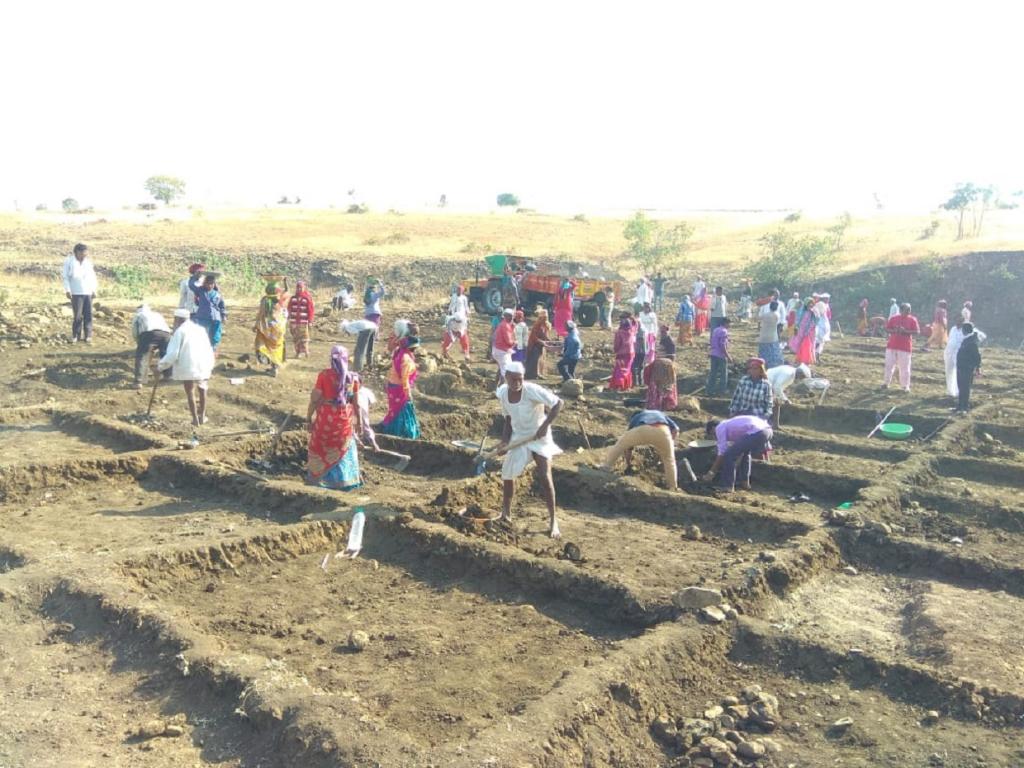 With little work on the fields, small landholders and landless labourers alike have made a beeline to the Panchayat’s Mahatma Gandhi National Rural Employment Gurantee Scheme (MGNREGS) sites.

“Canal cutting and village road works resumed in November; since then we have seen a stark increase in the numbers of participants from the three villages and two thandas (informal settlements) of the Donnur gram panchayat,” Sudanand Jamadar, one of the local technicians hired to oversee the progress of the projects, says. He estimates a 40 per cent jump in the number of job seekers.

The Rs 250 per day per person wage comes handy, especially in times of droughts. “Our main income this year has been through MGNREGS. For most landless labourers like me, there is simply no work on the fields,” says Ambaraya Biradar, who is digging a canal along with 180 others near Nellur.

In Kalburagi, MGNREGS person-days zoomed to 7.17 lakh in January 2019 from 1.25 lakh in August 2018, when the drought became apparent. Monthly person-days in Karnataka soared to 1.47 crore in December from 38.22 lakh last April, official data shows.

Amid soaring wage bills, the state alleged that the Centre was to pay dues worth Rs 1,932 crore in pending wages and material costs. The Narendra Modi government released only Rs 117 crore against a bill of Rs 2,049 crore, in addition to unpaid wages from previous years, state Rural Development and Panchayati Raj Minister Krishna Byre Gowda told Karnataka Legislative Assembly on February 12, 2019.

The Centre announced an additional Rs 6,000 crore in January but the outstanding across all states exceeds Rs 12,000 crore.

In Karnataka, there is also dissatisfaction regarding drought assistance. After the kharif period, the state sought Rs 2,434 crore to compensate for crop loss in 100 talukas. The Centre provided Rs 949.49 crore, only a fifth what it granted neighbouring Maharashtra.

More than favouritism, Reddy believes, it is the methodology that is to blame. Only severe drought conditions — where the loss is over 50 per cent — qualify for central support, according to the National Disaster Response Force manual.

The calculation is obfuscating: First, the drought-hit areas of small and marginal farmers as a proportion to their land-holdings in each state is calculated. The remainder of the area experiencing severe drought conditions is then divided by the average land-holding of large farmers to estimate the number of large farmers affected.

The drought-affected area held by large farmers is then calculated by multiplying the number of large farmers by 2 to indicate the 2ha land-holding limit on government assistance to farmers.

According to Reddy, such an evaluation suppresses the area affected by about 30 per cent which then gets converted to assistance that is much lower than requested.

Meanwhile, amid failed crops and fund crunches, farm debt is on the rise. As is the spectre of farmers’ suicides after a brief abatement, credited widely to the announcement of loan waivers by the state government after the 2018 election.

“Farming is a high-risk business — one year you do well and then, for the next five, you may not get anything. If one is not able to take the risk, and indebtedness keeps increasing, there is not much to do but to leave it all to god. This is happening again now,” says 30-year old Mannu Gemu Rathore of Dhuttargao settlement, where a farmer recently committed suicide.