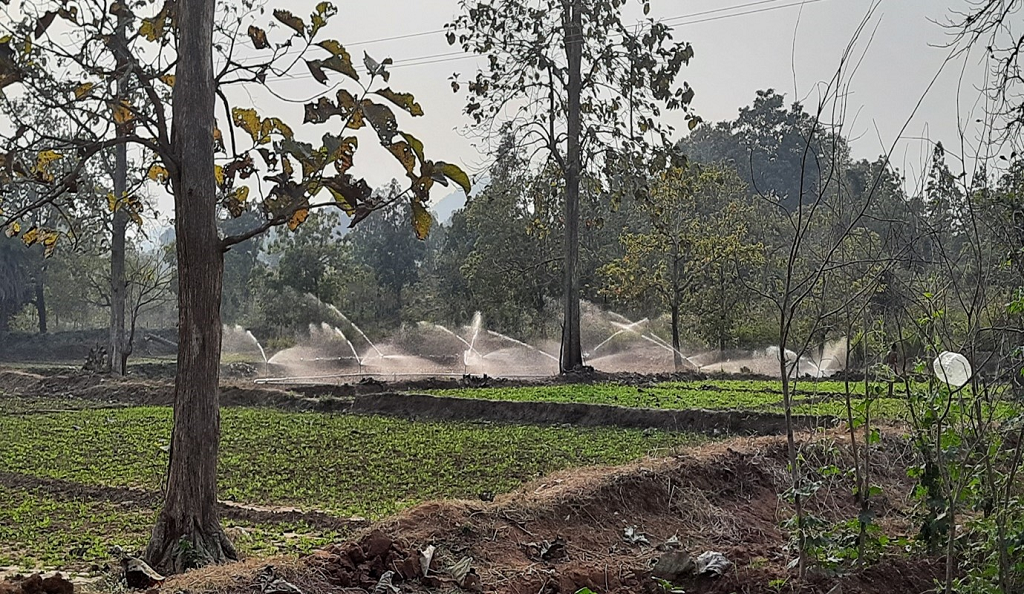 Tribal farmers in Odisha’s Malkangiri district are building micro-irrigation systems to harvest round the year, get higher income and consume diversified food.

Erratic rainfall and prolonged dry spells often damage crops, jeopardising livelihood of local communities. But now, the local population is trying to address these challenges, and are seeing good returns.

The local cultivators would only be able to grow paddy during summer, said Jairam Sisa, another farmer. But micro-irrigation has changed the game, he added. “Now, we are growing green gram, black gram, ground nuts, millets, flaxseed and vegetables.”

They consume part of the produce and sell the surplus at the local weekly market, said Sabita Sisa, Jairam’s wife. “We have been earning around Rs 2000 every week selling vegetables.”

Lachma, Jairam and Sabita are not the only farmers in the village reaping rich dividends from year-round harvest.

“In Totaguda, 18 tribal farmers have earned over Rs 12 lakh during 2021-22,” said Nandagiri Ramkrishna Hayagreeva, chief district agriculture officer, Malkangiri. “Distress migration is rampant and these progressive farmers have proven that farming is remunerative if they have assured irrigation facility.”

Local non-profit Somks, in collaboration with the local community, has established a lift irrigation project with micro-irrigation system outlets in Totaguda. It  covers 55 acres of cultivable command area (CCA) and benefits 18 tribal households.

This initiative is a part of the Special Programme for Promotion of Integrated Farming (SPPIF) in Malkangiri, launched by the state’s department of agriculture and farmers’ empowerment.

Preliminary maps were developed in consultation with village elders, which includes mapping surface geology, cropping pattern, geomorphology and land type. Crop failure zones, where the crops are critically affected during dry spell in the village, were also identified.

Water was provided across the CCA through 1,490-metre main and branch lines. A total of 22 outlets were constructed with provisions for connecting portable sprinkles and rain guns for efficient water management.

“The outlets have been designed in such a way that farmers can use both surface and micro-irrigation systems,” said Dilip Kumar Majhi, agriculture officer of the block.

DA&FE provided Rs 19,56,803 in funds, which is 90 per cent of the total project cost. The local community contributed Rs 2,10,061 to cover the rest of the land, labour and  pipeline network laying costs.

The micro-irrigation system aimed to reduce overutilisation of water in the field during evaporation, transport and percolation. Water delivery pipes reduce water loss through flooding and runoff.

“The pipeline distribution network was designed to maintain a hydraulic head at each outlet,” said Soumya Majhi, engineer, SPPIF. “This allows simultaneous and equal discharge in multiple outlets.”

A series of capacity-building programmes were organised at the community level on sustainable water use, organic farming and annual crop water budgeting. Farmers played an instrumental role in estimating the amount of water available from various sources for different crop cycles.

In 2021, chameleon soil water sensors were installed in the fields with the support of the Australian Centre for International Agricultural Research. These help measure the water level in the root zone of the plants and the quantity of water available in different areas of the soil.

Farmers can use this information to make informed decisions for boosting crop yields.

“Based on colour-code, farmers easily determine the appropriate timing for irrigating their crops,” said Amulya Kumar Patra, a village-level worker. This reduces excess irrigation and conflict among farmers, he added.

The farmers are leading the planning and overall management of their irrigation infrastructure.  This has strengthened community-ownership and improved water access.

The Water User Group (WUG) was formed with members of 18 households in the village. They oversee smooth management of the micro-irrigation systems. Besides, there is a pump-cum-valve-operator to supply irrigation water.

“We maintain records on pumping hours, irrigation cost per acre based on cropping-pattern and system maintenance,” said Mangraj Hantal, secretary, WUG. Each month every household donates Rs 100 for maintenance work, the member added.

Participatory focused-group discussions were conducted to select suitable crop varieties that are climate-resilient, commercially viable and rich in micro-nutrients. Farmers were encouraged to grow millets, pulses, oilseeds and vegetables in diversified cropping systems.

Earlier, the each household earned Rs 10,000-15,000. This increased to Rs 35,000-50,000 from the same plot of land after adopting micro-irrigation techniques, according to a recent impact assessment done by Somks.