Why are birds abandoning the Rollapadu Wildlife Sanctuary in Andhra Pradesh?

It is rare to spot a Great Indian Bustard in the Rollapadu Wildlife Sanctuary (Photo: Forest Department Of Gujarat)

The grasslands around Rollapadu, a village in Andhra Pradesh’s Kurnool district, was declared a sanctuary in 1988 to protect the dwindling populations of the critically endangered Great Indian Bustard. The bustard inhabits dry and semiarid regions of the country which hold naturally occurring grasslands and savannahs. The decision to declare it as a sanctuary was also to preserve the Rollapadu grasslands, which are critical for the survival of semiarid and grassland fauna in the Deccan region. Such grasslands, as part of protected areas, occupy much less than one per cent of the total land area of the country, but are home to many threatened fauna such as blackbuck, floricans, harriers, wolves and distinct plant communities. A guard who has lived in the sanctuary since it got the protected status recollects having spotted half-a-dozen bustards, many breeding pairs and solitary birds in the sanctuary area about 15 years ago.

But today, bird species that were extremely common earlier are rarely spotted in Rollapadu. Forest officials say they are hardly able to spot the bustards once or twice a year. Not just the Great Indian Bustard, Montagu’s harrier—a magnificent migratory bird that travels from parts of central Asia to the sanctuary every winter—has also shown declining trends of its presence. Two decades ago, the bird visited the sanctuary in hundreds, according to a study by the Bombay Natural History Society. In 2016, their recorded numbers had dropped to just about 50-75.

Montagu’s harrier is the most common species of harriers in Rollapadu. The bird feeds primarily on grasshoppers that are common in grasslands and agricultural areas. As Rollapadu still offers excellent grass cover for the bird to roost, their declining visitations gave us an opportunity to investigate the reasons behind the decline.

The intensification of agrarian practices across the area, as with many other areas in India, and the construction of the Telugu Ganga canal—for which a balancing reservoir in the nearby Alaganur village was constructed—to supply water from the Krishna river to Chennai, has changed the landscape in many ways. Naganna, a farmer based in Rollapadu, is witness to the overwhelming changes in the area. He has seen the loss of barakalu—the dry fallow and grasslands—that have gradually contributed to declining livestock amidst many other factors. 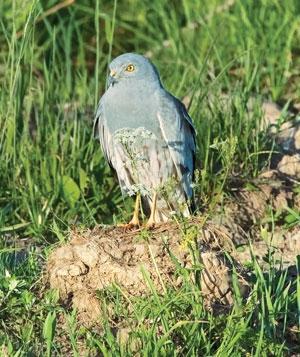 He says that due to the intensification of agriculture, there has been an unprecedented increase in the use of pesticides. Traditional food crops have given way to commercial ones such as cotton. Kurnool district, in fact, is marked as one of the priority districts for cotton production in India. An excessive amount of pesticides are used for cotton cultivation across India. The cotton crop accounts for almost 45 per cent of the pesticide production in India. Worryingly, 75 per cent of the pesticides used in India are insecticides, and not fungicides or herbicides. In contrast, globally, only 44 per cent of the pesticides used are insecticides. Their excessive usage possibly wipes out most of the agriculturally beneficial insects.

So, excessive use of pesticides in the landscape could be leading to dwindling number of insects and birds, which are the main prey for harriers. There have been isolated reports of harrier deaths, possibly due to secondary poisoning in the fields around Rollapadu.

Our interactions with farmers for a preliminary survey in the Rollapadu area made us realise that nearly 50 per cent of farmers are either unaware of the hazards of pesticides or the harm they cause to humans and birds. Studies at the national level also suggest that as high as 80 per cent of farmers could be using unreliable information for crop production due to various reasons.

The decline in harrier populations could also be due to factors along their migratory route or in their breeding areas. In fact, similar trends of bird population decline have also been recorded in the breeding regions of Europe due to agricultural intensification, destruction of nests by farm machinery, changing agricultural practices and the use of pesticides. A combination of factors both in Rollapadu and in other places could have resulted in the decline of Montagu’s harrier. However, there needs to be a more nuanced study to isolate factors responsible for their decline.

The fall in bird populations such as the Great Indian Bustard and Montagu’s harrier is a warning sign of decline not only for Rollapadu, but for other sanctuaries across the country. More research to monitor and understand the impacts of pesticides, sweeping changes of land transformation in the surrounding areas and the type of agriculture that is being practised are required, since a combination of factors may be responsible for the decline in the number of bird populations.

In many cases, researchers have observed that protected areas in the country are inadequate for wide ranging animals that wander into surrounding areas used by humans. Therefore, to make protected areas functional, there is an urgent need to make the surrounding areas of sanctuaries ecologically friendly. The government departments concerned must introduce initiatives to create eco-sensitive zones around sanctuaries. Such zones have been created in some of the larger sanctuaries, but are necessary even for the survival of smaller grasslands or savannah sanctuaries such as Rollapadu.

The authors work with the Ashoka Trust for Research in Ecology and the Environment, Bengaluru