Fall of the poplar

In the backyard of Asia's largest poplar market, farmers are being forced to quit growing the soft wood as its price crashes because of overproduction 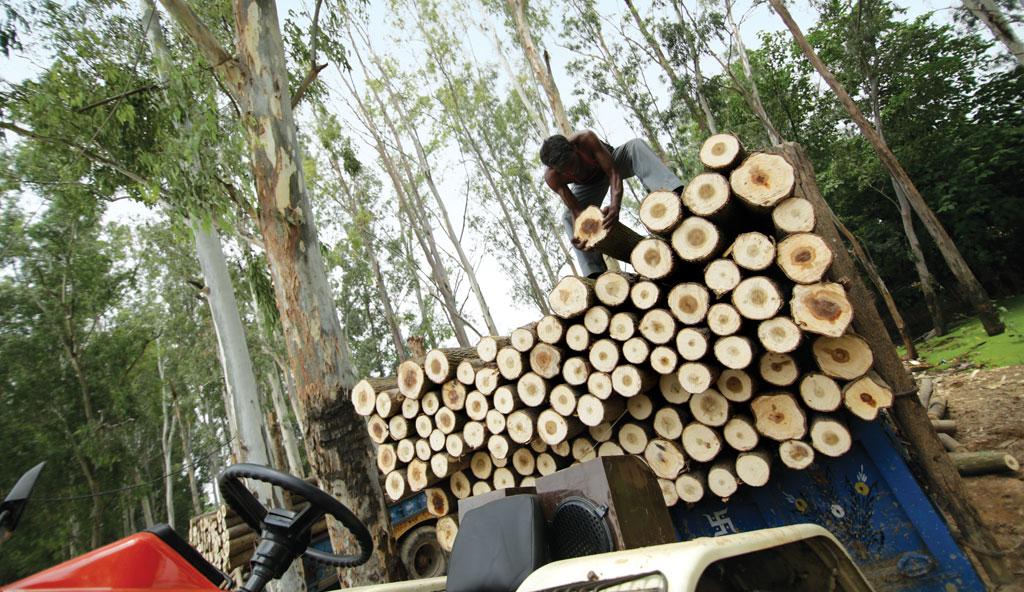 Balwinder Singh, a farmer from Haryana’s Yamunanagar district, is a worried man. Though the July 7 torrential rains spared his 6.5 hectares (ha) poplar plantation, it completely destroyed the sugarcane crops he had cultivated alongside. The 50-year-old farmer says he was relying on the sugarcane crop to see his family through this year because poplar—which till 2013 was worth gold—pays little today.

Poplar is a soft timber variety that is widely used in plywood, sports and paper industries. In 2012, when Balwinder last sold his poplar, he earned a respectable Rs 15,000 per tonne. “But things have changed drastically since. Now one does not even get Rs 5,000 a tonne. If the market does not improve, I will have to sell the poplar at this price, which will be a huge loss for me,” says he. Another farmer from the area, Sarabjit Singh, explains that the tree takes four to five years to mature and requires an average investment of Rs 75,000 a ha per year. “This investment would normally fetch a farmer Rs 4-5 lakh, but with the prevailing prices he won’t get more than Rs 1.2 lakh,” says he.

Like Balwinder and Sarabjit, many farmers across the district are now struggling with their poplar trees. Since 2014, the price of poplar has crashed by at least 60 per cent (see ‘Crash crop’). As a result, many farmers from the region are planning to stop growing poplar trees.

The situation was not always this bleak. In fact, Yamunanagar is the first district in the country where farmers started growing poplar in farmland. In 1979-80, matchstick manufacturer WIMCO started procuring poplar from two big Yamunanagar farms, Hara and Kalsia. Seeing the demand, these farms experimented with different varieties and brought down the maturing period from 10-12 years to four-five years. 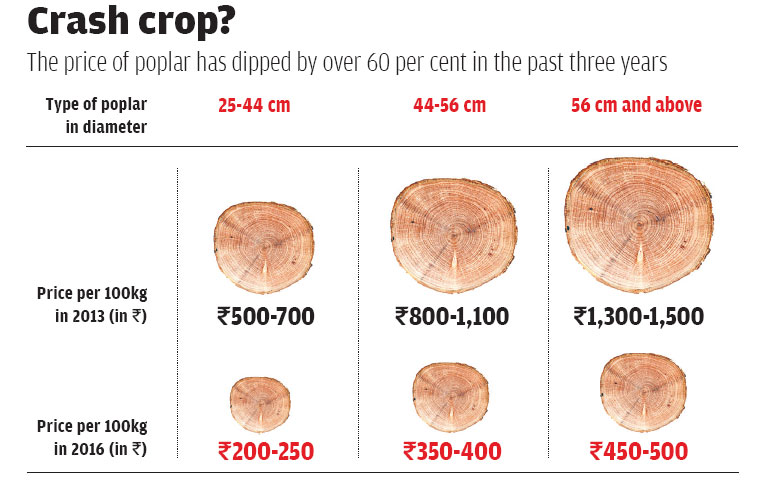 Farmers in Haryana, Punjab, Himachal Pradesh, Uttarakhand and Uttar Pradesh started growing poplar trees. A 2012 report by the then Ministry of Environment and Forests highlights this increase in poplar production. It says that from a few scattered plantations (in and around Yamunanagar), poplar plantations picked up in parts of western Uttar Pradesh, Haryana and Punjab. Yamunanagar district has over 700 factories that produce poplar products worth Rs 4,000 crore a year and provide livelihood to over 50,000 people, according to Yamunanagar’s Manakpur Timber Market Association. “Manakpur is Asia’s biggest poplar market and the district accounts for 80 per cent of soft timber production in the country,” says Maim Singh Dahiya, pradhan of the timber market association.

Too much to handle

While the poplar production picked up, a commensurate increase in the demand did not happen. This is at the heart of the current crisis. Jasbir Singh, secretary of the Agricultural Produce Marketing Committee (APMC), blames the unfettered expansion of poplar farms in the region for the current price drop. And one of the main reasons this has happened is because of Haryana government initiatives to facilitate farmers to increase poplar production. In 2006, the state forest department started to give poplar and eucalyptus seeds to farmers for free. In 2012, the state forest department distributed over 25 million poplars and eucalyptus seedlings to farmers to augment agroforestry. 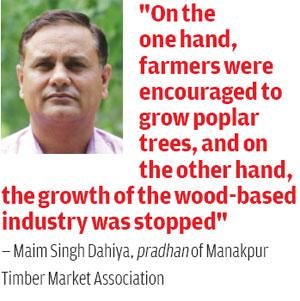 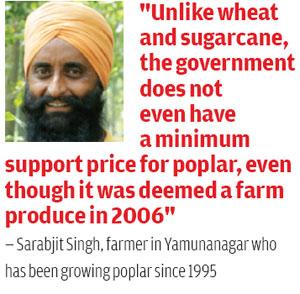 Sarabjit says that while the government pushed poplar production, it practically did nothing to ensure that the produced poplar is consumed. “Unlike wheat and sugarcane, the government does not even have a minimum support price for poplar. As a result, we are left at the mercy of plywood manufacturers who arbitrarily decide the rates to maximise their profits,” says Sarabjit.

Dahiya cites another reason. He says the 2002 Supreme Court ban on issuing new licences to wood-based industries stopped new players from entering the sector. On October 30, 2002, in its verdict on a petition filed by the late T N Godavarman Thirum-ulpad, the apex court put a closure on saw mills and other wood-based industries to check large-scale deforestation. It also prohibited state governments from issuing licences and called for the setting up of a Central Empowered Committee for the job.

Intrusion of foreign technologies has also played a role in bringing down the price of the timber. For example, the introduction of Chinese peeling machines, which can peel thinner logs as compared to the traditional process, has meant more quantity of raw wood can be extracted from each poplar tree. As a result, plywood industries are procuring less raw wood. This has further reduced poplar prices.

Farmers also say high transit pass charges are eating into their profits. The transit pass, locally known as Suvidha Shulk or Mandi Samiti Tax, has been increased from Rs 35 per tonne in 2010 to Rs 75 per tonne in 2016. Farmers in Haryana and Uttar Pradesh also have to pay the forest department two per cent of the money they get from the sale of wood. Traders question the forest department tax, saying that poplar was deemed a farm produce in 2006.

Farmers and timber associations across the region say immediate government intervention is required to arrest the situation. “Establishing government-owned manufacturing units for wood processing should be a priority,” says Dahiya. Next steps should be to ease the transit pass rules for farmers and set up an assured buy-back system to benefit poplar farmers. Interestingly, WIMCO, which was bought over by ITC in 2005, had an effective assured buy-back mechanism when it started procuring from Yamunanagar.

Farmers also say imports should be taxed heavily to check competition from abroad. And finally they demand that a regulatory body be set up to determine poplar wood prices.

The article has been taken from Down To Earth magazine.