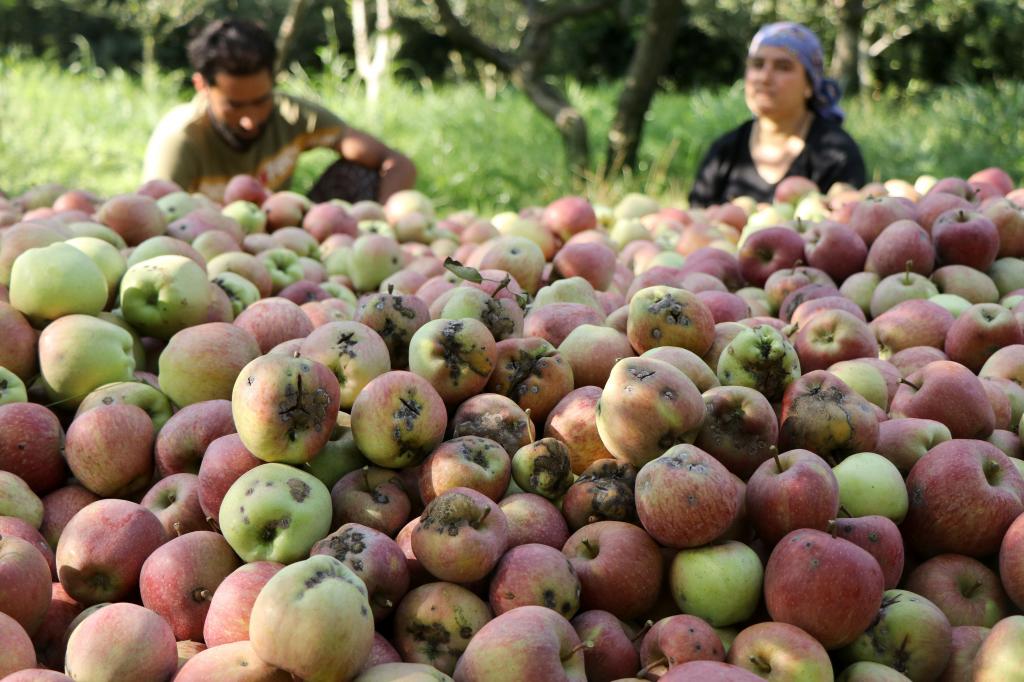 A couple in Tahab area of south Kashmir packs their apples. The apple scab disease returned in Jammu and Kashmir after 35 years. Photo: Kamran Yousuf

Kashmir’s apple output may be hit by scab disease this season as a fallout of climatic factors. While the fruits would remain edible, the fungal infection would leave marks, making it tough for farmers to get a good price.

Apple orchard owners across the valley are reporting the fungus (Venturia inaequalis), said Fayaz Ahmad Malik, who leads fruit growers and dealers at the fruit wholesale market in Sopore.

The disease is not unusual, but “I have never seen it so intense in my 35 years in business,” claimed Abdul Jabbar, an orchard owner in Bandipora district. His yield has dropped to 30 boxes this season, way below the normal 150-250.

Haji Khazir Mohammad of similarly told DTE that earlier he would get 5,000 boxes of apples every year from his 40 kanal (five acres) of orchards; this year he could manage only 800.

Blame it on climate change

Experts blamed a combination of factors for the attack: Early, intense snowfall in November 2019 —which usually hampers yield — was followed by an extremely wet monsoon, which aids fungal growth. The quality of pesticides is also being questioned.

Farmers may have missed applying fungicides due to heavy rains in March-April, said Asha Nabi, an assistant professor of plant pathology at the Sher-e-Kashmir University of Agricultural Sciences and Technology (SKUAST).

A section of the farmers have alleged that the meteorological department went astray with its predictions. 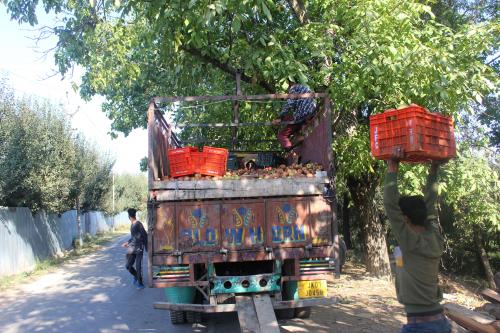 Apples with a scab infection fetch less than half the market rate compared to a healthy fruit. Photo: Kamran Yousuf

Scab spray must be scheduled religiously beginning February till the harvest season. Farmers usually also spray small doses of pesticides from February until the November harvest.

Many failed to sanitise their orchards due to untimely snow, she added: “The inoculum load was high in 2020 and, therefore, the high scab incidence in apple growing areas.”

Nabi pointed to the changing climate in the Valley and stressed on orchard sanitation, which includes burning fallen leaves in autumn.

Use of spurious pesticides may have hampered disease prevention as well, he added. The Jammu and Kashmir horticulture department failed to monitor pesticide quality, leading to spurious stocks, Malik alleged. Farmers like Mohammed also alleged that the chemicals sold in the market were spurious.

Experts from SKUAST said infections from the primary infection must be prevented with well-timed fungicide spraying during blossoming, early leafing and fruit development.

Leaves and fruits are highly susceptible to apple scab when they are young and growing. Mature leaves and fruits gain resistance as they age, according to 2019 study conducted by SKUAST.

“During the main growth period in early spring, there is more susceptible tissue available for infection and therefore, greater risk of disease,” the study observed.

It noted that apple scab generally did not kill trees, but can cause defoliation, that weakens the tree and influences its survival during winter conditions. It observed that early infections could lead to abnormal growth (fruit deformation) and fruit drop.

“The lesions on the fruits are similar to those on the leaves, but as they age, they produce cracks. If the fruit is infected late in the summer or just before harvest, black, circular, minimal (0.1-4 mm diameter) lesions called ‘pin-point scab’ would appear during storage,” it said.

The study noted that the leases could be managed by successful apple scab disease management that requires an integrated approach, depending on the grower’s goals. Such approach combines resistant cultivars, cultural practices, biological agents and use of fungicides.

The disease can be minimised / prevented through good horticultural practices such as selecting sites that provide more than six hours of sunlight a day; spacing trees adequately following proper pruning practices to open the tree canopy; sanitising in orchards to prevent pseudothecial formation in overwintering apple leaves.

The absence of crop insurance will likely hit the farmers even more.

“Apple is a perishable item and the chances of losses are quite high. The government has been trying to get private players to insure the orchards, but no company has shown interest so far,” said Manzoor Ahmad Mir, deputy director, planning and marketing wing, horticulture department.

The apple industry provides livelihood to over 47 per cent of the population of Kashmir. The region has more area under apple cultivation than the United States, the world’s second-largest producer. Some 2 million tonnes are exported annually for about Rs 8,000 crore, according to the department.

The novel coronavirus disease (COVID-19), of course, would make things different. Farmers have blamed the pandemic for the infection, apart from substandard fungicides for the breakout of the infection.

“It was only when I took up the matter with higher officials that the government allowed shops to provide fertilisers. Unfortunately, most orchids did not follow the modified schedule and skipped spraying,” he claimed.

Bhat rued his department was “powerless” when it came to regulating licences to fertiliser dealers, checking of samples, among other things.

The infection anyway come after the unusual circumstances created by the abrogation of Article 370 last year, since when the region has been under a communications blockade. As landline, mobile and internet services remained shut, traders could not do business as usual. Malik estimated traders’ losses last year at around Rs 8,000 crore.