Will the loan waiver announced by the Maharashtra government help alleviate farmers' plight? 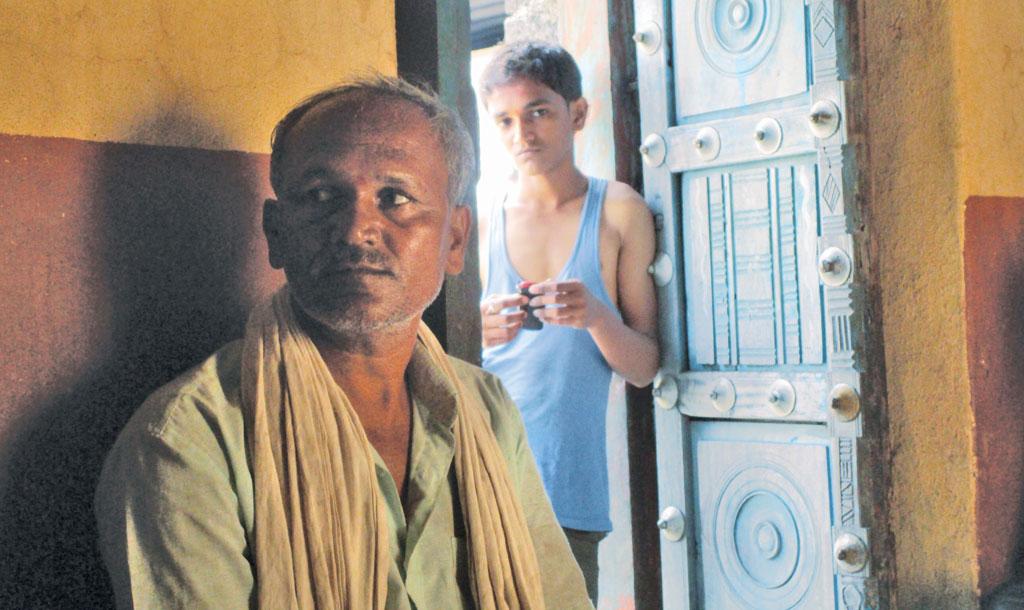 Venkat Lakshman Vayar lost the entire sugarcane crop after the only dugwell on his farm dried up. He was planning to use the money to marry off his daughter Sheetal. In April, Sheetal jumped into the dried dugwell and committed suicide after she came to know that her father plans to take more loan from a moneylender for her wedding (Photo: Nidhi Jamwal)

SQUATTING ON the floor with his head held between his hands, 63-year-old Anant Niture, a small farmer from Sonwati village in Latur, stares at the ground. At the beginning of the kharif season in June 2016, Niture sowed tur or arhar dal (pigeon pea) on his two-acre (one acre equals 0.4 ha) unirrigated land. Then the market price of tur was as high as Rs 10,000-12,000 per quintal (100 kg). Niture hoped to finally make some profit after three years of consecutive droughts and untimely hailstorms that had hit the state’s Marathwada region.

However, all his hopes dashed when within a couple of months the domestic market price of tur crashed to an all time low of Rs 4,000 per quintal. For the first time, the market price of tur fell below the minimum support price (MSP) of Rs 5,050 in 2016-17. “Last year, there was a scarcity of pulses in the country and the prices had skyrocketed. The agriculture department told us to sow more tur to reduce dependence on imports. See, what happened after we followed the government’s advice,” he says caustically. Agriculture officials blame untimely import of tur for the price crash in the domestic market. “The imported tur flooded the domestic market around October last year, bringing down the prices. Our farmers suffered a great deal as they harvested tur crop two months after the glut,” says Mohan Gojamgunde, agriculture officer of Latur.

India is the world’s highest producer of tur. But, because of a gap between demand and supply, it is also the largest importer of the pulse. As per the March 2017 Commodity Profile of Pulses, the government was expecting a high tur production this year—4.23 million tonnes, up from 2.56 million tonnes in 2015-16. Despite this knowledge, there was a 24 per cent increase in tur imports from 462,710 tonnes in 2015-16. “The government should have procured domestically produced tur before flooding the market with imported tur,” says Gojamgunde.

About 50 km from Sonwati is Bisewagholi village where Rajabhau Manikrao Salunke owns 3 acre. He depends on the rains for the kharif crop of soybean. Last year, untimely rains destroyed a large chunk of his ready-to-harvest soybean. To worsen the matter, market price of the crop crashed by nearly 40 per cent this year. Left with no choice, Salunke has taken a private loan of Rs 1 lakh for the wedding of his daughter, and is staring at another year of doom. “A farmer takes at least three years to recover from the impacts of one year of drought. But in Marathwada, we are facing consecutive droughts, freak hailstorms and a price crash,” says Salunke, who blames imports of soybean oil for the recent soybean price crash.

India faces a wide gap between demand and supply of soybean oil, just like tur. In 2015-16, for instance, the oil demand was 5.4 million tonnes, but domestic production was only 1.35 million tonnes. The gap is filled through imports, with India being the largest importer of soybean oil. “Despite a gap between demand and supply of food items in the country, our farmers are running into losses. There is a need to check our import policies and tune them in favour of our farmers,” says Gojamgunde (see ‘Rs 1,402,680,000,000’,).

Predictably, farmers in Maharashtra are an angry lot. On June 1, farmers in Nashik and Ahmednagar took to the streets to protest against low crop prices. As a desperate measure, supplies of vegetables and milk to Pune and Mumbai were cut. “We were forced to cut essential supplies to cities to attract the government’s attention towards farmers’ plight,” says Sandip Gidde, core committee member of Kisan Kranti Jan Andolan that spearheaded the protest. On June 11, Chief Minister Devendra Fadnavis announced a farm loan waiver. There are 13.6 million farmers in the state and their loans add up to Rs 1.14 lakh crore. But, the loan waiver may not exceed Rs 35,000 crore, as parameters are being worked upon to benefit only the needy ones, he clarified.

But the loan waiver has not brought cheer to Satyavan Padmaka Nageen who owns 2 acre in Sonwati village. In 2014, he took an additional 1.5 acre on rent for two years, with an annual rent of Rs 90,000 to grow soybean and tur. When he approached the local “society” (primary agriculture co-operative society under the district co-operative bank), he was denied loan. Nageen had no option but to take private loan (khajagi karz) of Rs 1.5 lakh at an interest rate of 36 per cent. As ill luck would have it, the next two years were consecutive drought years in Marathwada. So Nageen ended up paying land rent of Rs 1.8 lakh for nothing. Last kharif season, he managed to get Rs 45,000 loan from the “society”, and planted soybean and tur on his field. But, the prices of both the crops crashed. “Most small and marginal farmers are forced to take loan from private moneylenders as they don’t get requisite loan from society. These moneylenders often charge up to 60 per cent interest rate,” says Sandipan Badgire, a social activist from Sonwati.

Another reason for farmers to get trapped in debt is the rising cost of production. “Seventy per cent of the production cost depends on inputs like seeds, pesticides and fertilisers, whose cost has multiplied manifold,” says Anil Patil, official with the quality control division of agriculture department, Latur. Besides, the market is now flooded with fake and sub-standard inputs like seeds and fertilisers. Down To Earth held discussions with small and marginal farmers in Latur to understand the input costs and returns on some major crops in the region. The findings show that at best farmers can earn Rs 1,700 from an acre in a month (see ‘High on production cost...’). 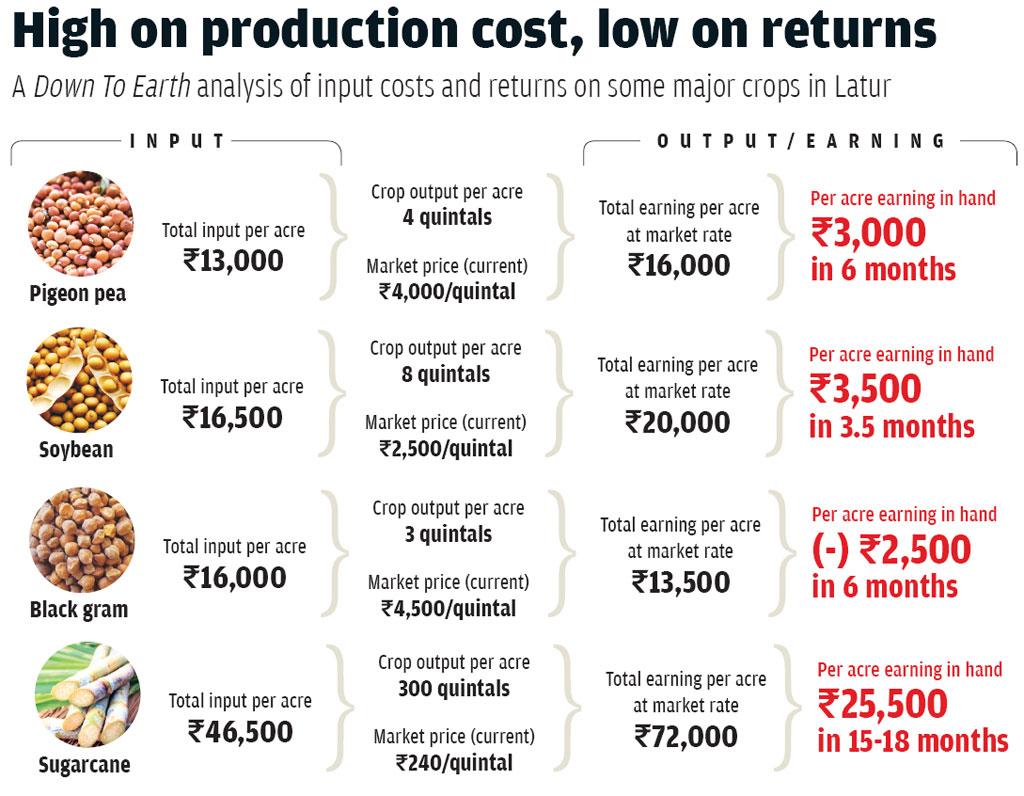 To protect farmers against sudden price crash, the Union government announces MSP for select crops every year, based on which the government directly purchases crops from farmers. But, farmers have not benefitted from this either. “For the 108 villages in Latur taluka, there is only one tur procurement centre. Farmers spend money to transport their crops all the way to the centre where they wait for over a week in queue to get those procured,” says Niture. A large number of farmers thus prefer selling their produce in the open market despite a lower price. “In the market, we get paid immediately. But payment from the procurement centre comes after 15-30 days,” says Pradeep Kutwade, farmer from Sonwati. He alleges that traders often buy tur from farmers at Rs 4,000 per quintal and then sell it at the procurement centre for Rs 5,050. That was the reason the Centre decided to shut down tur procurement centres by April 22.

With all odds stacked up against them, farmers are taking their own lives. In the past three years, 11,864 farmers committed suicide in the state. This year, despite good rains, another 852 farmer suicide cases were reported in the first four months. In April, Sheetal Vayar, 21-year-old daughter of Venkat Lakshman Vayar, a farmer owning 5 acres in Bisewagholi, committed suicide. Venkat planted sugarcane on 1.5 acre last December. But his only source of irrigation, a dugwell, dried up and the entire crop wilted. “I am already under debt and had planned to use earnings from the sugarcane to marry off Sheetal. But, when I lost the crop, I decided to take more loans. She possibly came to know about it and killed herself,” he says.

Clearly, mere loan waiver will not reduce agrarian crisis and farmer suicides. There is a need for district-level crop planning, an exercise carried out by the agriculture department before the beginning of each kharif season but only on paper, says Sudhakar Shinde, farmer leader from Gangapur village in Latur. Gojamgunde says MSP of crops needs to be raised. The 2006 National Commission on Farmers recommended an MSP formula where farmers will be paid more than 50 per cent of the cost of production. However, this formula may not work in favour of farmers, says Patil. “What is required is lowering the cost of production, so that even when prices crash, farmers do not suffer huge losses,” he adds. Small farmers like Nageen demand more credit from co-operative banks, so that they don’t pay a whopping annual interest to moneylenders. Crop insurance can also go a long way in protecting farmers against the vagaries of nature. On paper, the Maharashtra Groundwater (Development and Management) Act, 2009 bans borewells below 60 m, but there is no implementation. Even 168 m deep borewells in Marathwada have gone dry. With erratic rains, freak hailstorms and fast emptying aquifers, Maharashtra is headed towards more than just an agrarian crisis. It is staring at an ecological disaster.